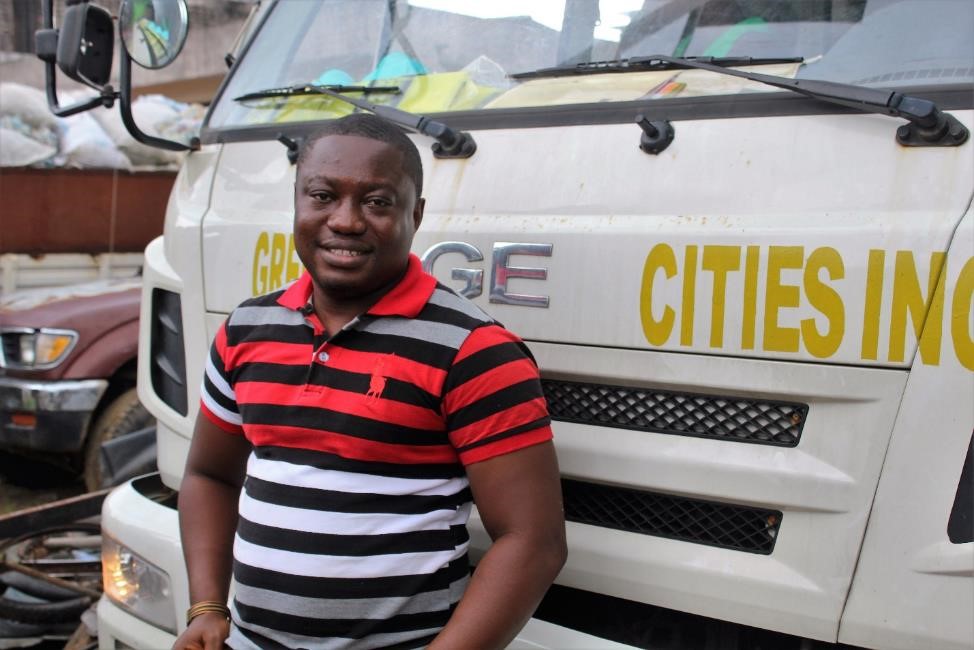 Green Cities, run by CEO James Mulbah, will be using the funds provided by the prize to implement its Urban Youth Recycling Project, which aims to tackle the dual issues of youth unemployment and poor waste management in Monrovia.

Mulbah said his company will be encouraging young people to create clubs to collect waste products that they can sell to Green Cities. For aluminum cans, the company buys at the rate of L$30 (US$0.31) per kilogram, approximately 67 cans. Those items will then be sorted and then recycled into products for sale.

Already, Green Cities produces several containers that are bought by local companies including chlorine bottles made from discarded water sachets. Besides the water sachets, Green Cities also receives plastic gallons made with high-density polyethylene, which his employees have to expend much energy to process. They manually cut the plastic into smaller pieces, then wash vigorously with a brush before grinding the materials in a machine. The transformed product is then palletized and ready for processing into finished products.

Mulbah said he hopes to acquire machines that can reduce the amount of manual labor performed by his 17 employees, all of whom he recruited through an internship program run by Mercy Corps.

Green Cities does not only deal with inorganic wastes like plastics. The companyâ€™s proximity to the Nancy B. Doe Market provides access to the biodegradable waste generated there. However, Mulbah said the company stopped processing organic waste at its Sinkor location because it was unsanitary to process waste so close to the market. If Green Cities seems to be doing a lot, that is a conscious decision on Mulbahâ€™s part. â€œWeâ€™re trying to have a complete chain of waste management,â€ he explained. Accordingly, he has constructed a poultry farm on the Bensonville site that can hold 5,000 to 6,000 birds. The waste product from the poultry will also be used in the organic fertilizer.

Green Cities is also venturing into electronic waste. â€œOur dream is not only to recycle but also to reuse,â€ Mulbah said. â€œIn the near future, weâ€™re actually hoping to launch a program â€“ and we already have it incorporated as a non-profit arm for Green Cities â€“ called Computer for Schools Liberia.â€

For that program, Green Cities is collecting used computers from prominent NGOs in the country. The company will refurbish these equipment and help schools across Liberia to establish computer labs.

Mulbah, who was part of the first class of Tony Elumeluâ€™s Entrepreneurship Program, said he has never been one to be content with following the crowd. When he was first deciding on what business to enter, he observed that â€œeveryone was going for the same thing. Everyone was buying bags of rice for reselling.â€ The top prize in the social entrepreneurship-focused competition was secured by Mahmud Johnsonâ€™s J-Palm, which aims to start producing charcoal briquettes from palm kernel shells. J-Palm is already well-known for its Kernel Fresh brand of palm kernel oil.

Common Sense Solutions, Inc., the publisher of The Bush Chicken, took the third place prize to develop a web application to allow employers to better screen and connect with job applicants. The prizes for the first, second, and third place prizes were US$5,000, US$2,000, and US$1,000.