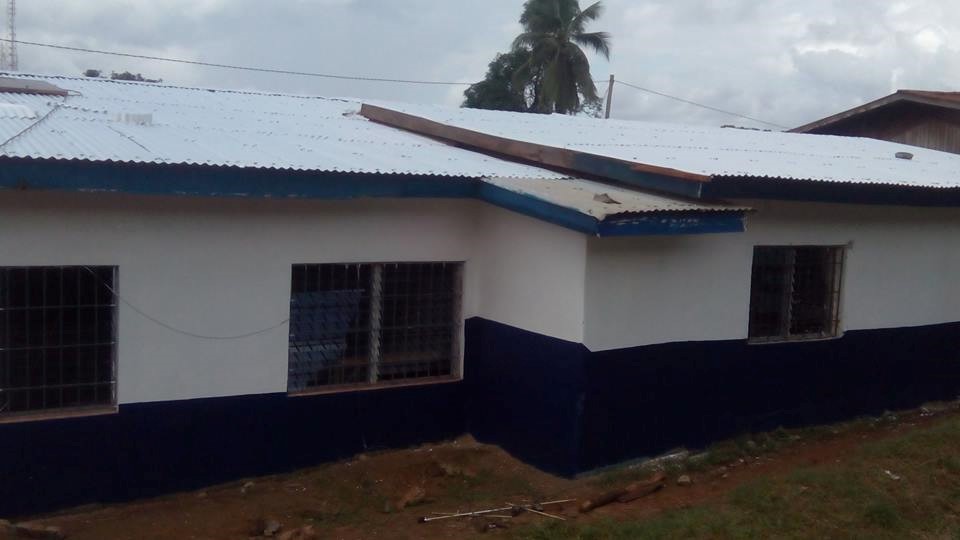 GANTA, Nimba – A 10-day renovation of the Liberia National Police station in Ganta has finally come to a conclusion. The renovation, which started on October 15, was needed because of damages inflicted by an angry mob during the September 30 unrest in the city.

Several parts of the building were damaged including the roof, windows, and doors. Although the building was already in a run-down condition, the violence worsened the situation. Justice Minister Benedict Sannoh had named commercial motorcyclists as the ringleaders at the center of the violence. Consequently, the justice minister imposed a three-day curfew and banned the movement of motorcycles in Ganta.

The curfew was lifted, but the ban on motorcycles was extended by President Ellen Johnson-Sirleaf after she found out that the police station had been vandalized.

The entire cost of the renovation is estimated at US$5,000. During the renovation, citizens of Ganta donated sacks of water, paint, and cash.

One of those making a personal donation was Lawrence Sua, Manager of the First International Bank in Ganta, who made a donation of three buckets of paint. Rep. Jeremiah Koung, the contractors, and some of his office staff assess the facility during the renovation. Photo: Chester Dolo

On Oct. 20, during a press briefing in Ganta, Sannoh lifted the ban on the movement of commercial motorcycles based on what he considered a significant improvement.

“On the renovation, we visited the police station,” Sannoh said. “We saw that work had been done. The roof has been repaired; a lot of painting job is done.”

“There is a significant improvement on the facilities. I want to thank Senator Prince Johnson and Rep. Jeremiah Koung – both of them have played a leading role in this process,” Sannoh said.

The vandalization of the Ganta Police Station came as a result of a protest by members of the Motorcycle Union in Ganta after businessman Prince Howard was named as the one who allegedly hired Bill Lauriss and others to kill Nyah Domah, a member of the union.