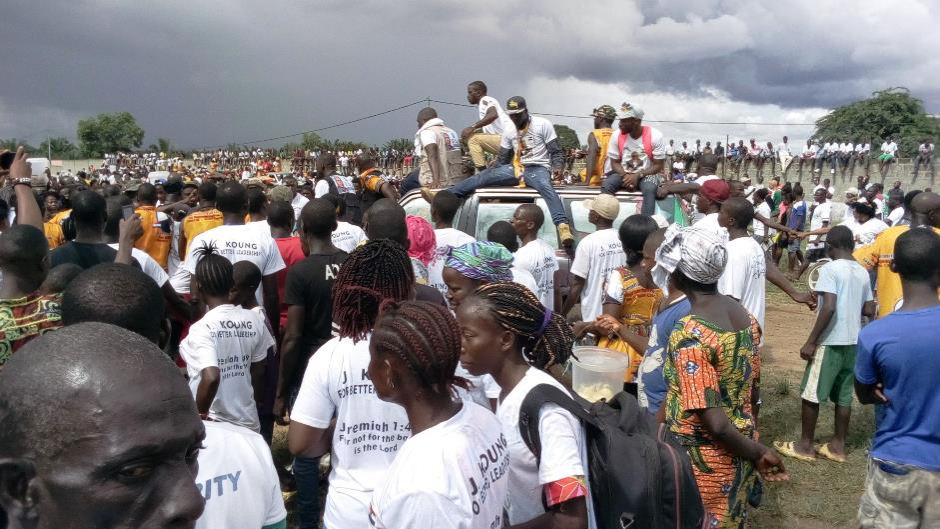 GANTA, Nimba â€“ The incumbent lawmaker of Nimbaâ€™s first electoral district, Rep. Jeremiah Kpan Koung, has sent out a clear signal to opposition candidates running for the district’s seat with a rally that was attended by a large crowd.

Hundreds of supporters clad in white and yellow gathered on the streets of Ganta on Saturday, September 30, 2017, to see Koung officially launch his campaign for a re-election.

During the launch, different Koung support groups chanted slogans such as, â€œJerry is our choice, oppositions give way.â€

The event, which concluded with a brief ceremony at the Ganta (Kumasi) Sports Field, began with a street parade from the Guinea Road intersection through Gantaâ€™s Main Street to the field.

Koung, who was carried on top of his branded vehicle, briefly addressed his supporters where he thanked them for their unwavering support.

Some critics have said Koung was only able to pull such a large crowd because his event occurred during the same weekend as other events that were held for his fellow partisan, the Movement for Democracy and Reconstructionâ€™s Prince Johnson. Supporters of Johnson had come to Ganta a day before Koungâ€™s event for a campaign event.

Nimba, Johnsonâ€™s stronghold, has overwhelmingly supported Johnson in past senatorial and presidential elections. Accordingly, voters have tended to support members of Johnsonâ€™s party. Before founding MDR, Johnson was a member of the National Union for Democratic Progress.

Koung was elected on NUDPâ€™s ticket in 2011, and he is now one of only two candidates retained under Johnson new party, MDR.

In a press conference held a day after his campaign launched, Koung appreciated his supporters for the large turnout. Koung said he believes he will win the election by 85 percent and above, based on the level of turnout he witnessed during his launching.

â€œOur people spoke very well that day from the way they turned out,â€ he said. â€œI can say to you, if I donâ€™t win this election by 85 percent, I will be disappointedâ€¦â€

However, Koung said he has no time for complacency and winning the election is not his focus at the moment. Rather, he said he will continue to ensure that he fosters his developmental goals set forth for the district in the remaining days as a lawmaker of the district.

Sharing
Tags Jeremiah Koung, Movement for Democracy and Reconstruction, Prince Johnson
Contributions to The Bush Chicken are not tax deductible.