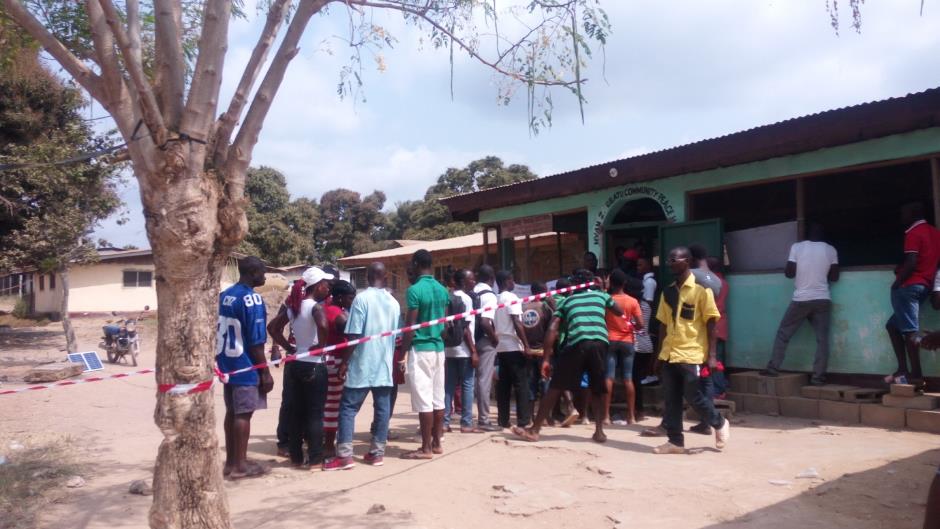 GOMPA, Nimba – Voter registration for the upcoming elections scheduled on Oct. 10, 2017, began throughout Liberia on Feb. 1, allowing citizens aged 18 and above to obtain the voter registration card. Some citizens trying to register on the first day of the voter registration process migrated from one community to another as they were frustrated by the slow process and staff that sometimes appeared unprepared.

Alro Glay, the Chairman of Deakehmein Community, where one of the registration centers is located, told reporters he was disappointed with how the process is being conducted this year. He revealed a common complaint cited by registrants that workers appeared incompetent and at times, not literate.

“These people that are doing the work are very slow,” he said. “I don’t know why NEC has to [fire] those who are qualified to do the work and bring people who cannot even spell common names like ‘Mary’ or ‘Kou’ to do this work.”

Furthermore, Glay told reporters that NEC can make a change by replacing the current staff with qualified ones “that will be able to spell peopleâ€™s names.”

In the Rehab Community, citizens had to wait until 2:00 p.m. before NEC staff started the process. Olu Samulu, a resident of Gbessilla Community, expressed his disappointment that the staff was not fully trained to use the equipment.

“All the people they [brought] here this year don’t know the work,” he said. “Even to use the materials, they had to [struggle] to use it.”

Samulu did commend the government for making funds available to NEC for the prompt commencement of the 2017 electoral process, even as he was disappointed at the process.

“The recruitment exercise does not represent Liberia’s intention to have a free, fair and democratic election,” he added. “It is impossible to say a person who comes from Nimba is not able to spell [a]Â simple name like ‘Kou.’ The election monitors in Nimba need to put in more monitoring and supervision mechanisms; let their presence be felt. Because what I see in district oneÂ­ â€“ if this is what [is] happening in other parts of the county, then it is the worst.”

Maime Dao, who registered in 2005 and 2011, withstood the many delays and finally got registered at the Liberty Christian Institute Voter Registration Center in Deakehmain.

â€œThis year, the people they sent to do the work worked very slow,â€ Dao said. â€œThe place is not packed and they are taking almost 15 minutes to register one person.â€

Dao used the occasion to appeal to those who are reluctant to register, saying that it was their civic right to vote. For his part, the election magistrate for upper Nimba, Princeton Monbia, said the citizensâ€™ complaints need not be so extreme.

“We cannot take anybody out now to replace them,â€ Monbia said, â€œAnd they are all going on fine with their work.”

Reacting to criticism about the recruitment process for staffers, Monbia said the process was â€œtransparent,” adding that after the training for workers, NEC officials administered an aptitude test, which weeded out some incompetent workers.

Monbia denied receiving complaints from staffers assigned at centers under his control, but admitted that NEC has been denied access to use some academic facilities. A citizen made available his home for the registration after NEC staff were denied access to the abandoned Yini High School Campus for not being informed earlier of the intended use. Photo: Arrington Ballah

Reporters visiting centers around Gompa found a malfunctioning camera in the center on the John Memorila School campus on Guinea Road. A supervisor at the center confirmed that the camera was broken.

Elsewhere in Dingamo Town, along the Ganta-Sanniquellie Highway, the registration process was halted immediately after day one due to a camera failure. Similarly, in Zuolay, Gbor Chiefdom (electoral district four), the process also came to a standstill due to camera failure after the first day.

Many citizens alleged that the local magistrate in Nimba received US$50 from those recruited to conduct the registration. Monbia denied these allegations and defended the late turnout of VR staff and the slow registration process.

“This is not true, this is not true. How can you take money to recruit people? We don’t do that. That is against our ethics,” he said. “And the first day of every exercise is very tough, so if the people took some time today to go to their various centers, I know they have all adjusted themselves to that – we anticipated thatÂ because some of them were facing some problems in their centers.”