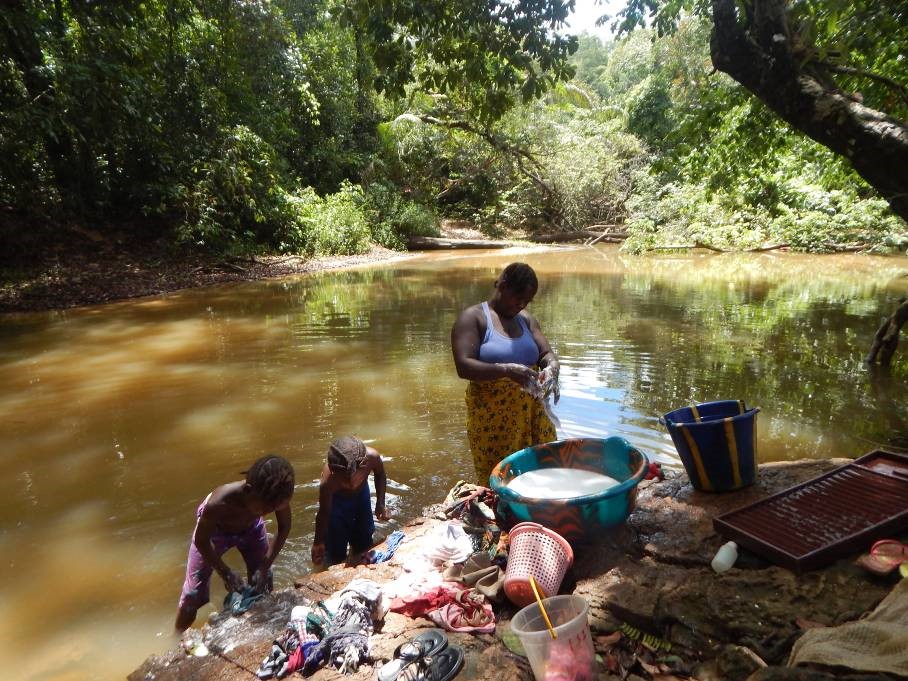 KINJOR, Grand Cape Mount â€“ Amid acknowledgment by the Bea Mountain Mining Corporation that toxic waste created as a result of their activities have polluted nearby wetlands, a Bush Chicken investigation has established that residents of the town of Gekando, along the Mavor River in Grand Cape Mount, are suffering from skin rashes and polluted water supply.

Gekandoâ€™s town chief, Mustapha Kamara, explained that residents first noticed something was wrong about three months ago when they observed that fish in the river were dying in large numbers. The deaths were accompanied by â€œa strange scent from the river in the form of medicine.â€ The elders of the town, who mostly lack formal education, were initially unsure about the source of the mass death of fish in the river. At one point, Kamara said they attributed the phenomenon to the sun.

The chief said residents eventually reported the issue to Bea Mountainâ€™s management, prompting the company to send a team to visit the site and collect samples of the water, along with photos of dead fish.

Employees of the company later returned to collect specimen of dead fish, after the phenomenon continued to happen, Kamara said. Bea Mountain notified residents that they were sending the fish for testing and would report back to the town within three months.

That time has passed, and Kamara said they have â€œyet to receive any report from the company on the situation.â€

An important source of livelihood has now disappeared for the residents, Kamara said, because Gekando residents can no longer fish from the Mavor River. Instead, they must travel distances to purchase fish for consumption. The polluted MavorÂ  River on the outskirts ofÂ  Gekando Town, after a rainfall. Photo: Zeze Ballah

Mohammed Massaley, a resident of the town and a chainsaw operator, observed that at times, the color of the river turns blue or black. When The Bush Chicken visited the site, a heavy downpour of rain had recently fallen, resulting in the typical brownish color of rivers after aÂ heavy rainfall, but residents contended that after the rain dissipated, the unusual bluish black color would resume. The townâ€™s chief said the recent color changes was something he had never seen before the reports of pollution. Massaley was irked that residents had not been compensated by the company for the disaster that was disrupting their lives. â€œWhenever I bath in the river, my skin itches and rashes develop on my body,â€ he added.

Bea Mountain has made some attempts to accommodate town residents after the pollution. Abdullah S. Kamara, a youth leader, narrated the companyâ€™s efforts to construct three hand pumps in the town, noting that town residents â€œwere advised not to use a hand pump near the river during the rainy season because of the gravity of the pollution.â€ â€œResidents of GekandoÂ were also informed by the gold mining company that after the period of 10 years, they should not use the water from the hand pump near the Mavor River because it will be dangerous for their health,â€ Kamara said.

He stressed that the pollution of the river was worsening by the day and needed timely intervention from the government. Kamara also claimed that whenever a person entered into the river, their feet would turn white.

Despite the apparent pollution of the water, residents still use the river to wash their clothes and bathe.

Bea Mountain was recently fined US$10,000 by the Environmental Protection Agency for the pollution. Anyaa Vohiri, the EPAâ€™s Executive Director, released a press statement at the time saying Bea Mountain had disrupted an ongoing investigation into allegations that it discharged toxic effluents into the river without notifying the EPA.

She said the investigation into the allegations, which included sites visits, laboratory analyses of water samples, and technical conference with the companyâ€™s management, was being conducted in response to numerous complaints by residents of Gekando that fish were found dead within 3.15 km of the companyâ€™s Tilling Storage Facility.

The Bush Chicken is yet to establish whether the company has paid the fine assessed by the EPA.

In a press release dated May 10, 2016, Bea Mountainâ€™s parent company, Aureus Mining, reported that operations at the New Liberty Gold Mine had been temporarily suspended as a consequence of problems with the detoxification circuit in the process plant.

The statement said higher than expected concentrations of weak acid dissociated cyanide were being produced, and that recent heavy rainfall inadvertently resulted in a â€œsmall overflowâ€ onto the wetlands area within the mining lease area. The specific figures of the concentration were not mentioned.

The company claimed that there had been no adverse impact on any human settlement as the discharge took place within the mining lease and some five kilometers from the nearest settlement.

However, the press statement said while processing operations were suspended, â€œmining operations are continuing at New Liberty to build up ore stockpiles and undertake waste stripping.â€

In another press release dated June 1, the company said it was working with the EPA and the Ministry of Lands Mines and Energy to modify its plants to restart processing operations.

The Bush Chicken has made several attempts to interview EPA staff on the story, but they have resisted establishing a schedule for an interview.

Additionally, this news outlet requested from Bea Mountain copies of results of analysis on the water and fish in the affected area in addition to the specific magnitude of the weak acid dissociated cyanide that went into the wetlands. A map of the area affected along with diagrams of any wetlands and bodies of water was also requested. Bea Mountain has not provided any of the requested information, preferring instead to defer to the aforementioned press releases.

Weak acid dissociable cyanide is a byproduct of modern gold mining, and the chemical is considered to be a thousand times more toxic to fish than to humans.