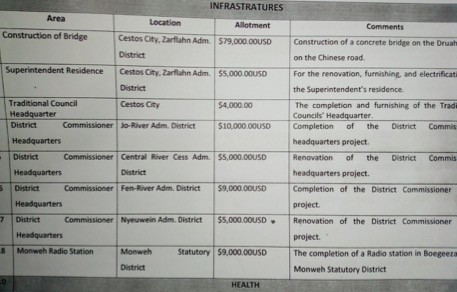 CESTOS, River Cess â€“ Over the weekend, delegates at River Cessâ€™ fourth county council sitting voted to use this yearâ€™s allotment of the county and social development funds to complete mostly unfinished development projects across the county.

All the projects earmarked for implementation are existing initiatives, except for the construction of a concrete bridge over the Druah River in Zahnflahn District. Delegates allotted US$79,000 for the bridgeâ€™s construction.

Formally opening this yearâ€™s council sitting, River Cess senator and the chair of the River Cess Legislative Caucus, Dallas Gueh, told citizens that US$207,660 had been remitted to the county as a county development fund for the 2018/2019 fiscal year. Gueh said no money had been received for social development fund, which is usually derived from concession companies operating in a county.

The delegates voted to allocate US$10,000 and US$9,000 to complete the Jo River and Fen River administrative district headquarters, respectively. They also elected to spend US$5,000 each for the renovations of both Central â€˜Câ€™ and Nyorwein Administrative Districts headquarters.

Although the budget law prevents the amount used for the operations of the Project Management Committee from exceeding 10 percent of the total county development fund to be used, the county allotted US$22,000 for the PMCâ€™s operations, in violation of the limit. The PMC administers and monitors the spending of the funds. An additional US$6,500 was also allotted for the operations of statutory and administrative districts within the county.

The delegates have also apportioned US$5,000 for the renovation, furnishing, and electrification of the abandoned superintendentâ€™s residence, US$4,000 to complete the furnishing of the traditional councilâ€™s headquarters and US$9,000 for the construction of a radio station.

Also, for the completion of all legislative support projects, the county agreed to spend US$13,000 and another US$13,000 to electrify Cestos City.

The construction of individual district headquarters across River Cess was embarked upon during the previous administration of President Ellen Johnson Sirleaf, but none has been fully completed.

Only one of the commissionerâ€™s compound is currently occupied by a district commissioner; the rest of the projects, each of which cost US$35,000, currently lie unfinished. The funds to begin those construction projects came from the countyâ€™s social development fund made available by the National Oil Company of Liberia. 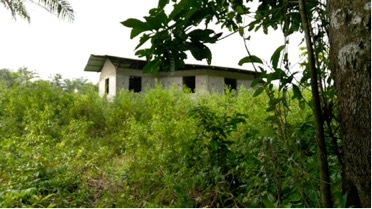 River Cessâ€™ former Project Management Committee chair, who is now assistant superintendent for fiscal affairs, Elijah Kassaynee, reported during the just-ended council sitting that an additional US$28,125 was allocated for the completion of the Fen River Administrative District headquarters during the last fiscal year.

The delegates also elected a three-member PMC to serve a tenure of three years, in line with the budget law. They include River Cess Broadcasting Serviceâ€™s finance officer Romeo Kebbeh as chairman, the stationâ€™s board chair Isaac Trobeh as comptroller, and Andrew Gueh, who currently serves on the county health team as treasurer.

River Cess saw a pause in development projects during the previous administration because, for five years, the countyâ€™s legislative caucus imposed a moratorium on the use of the social development because of corruption.