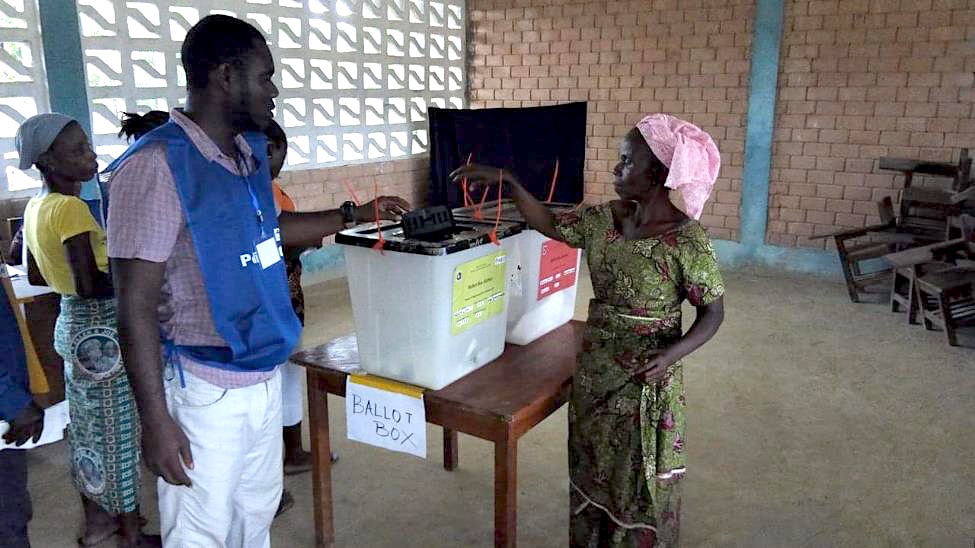 TOE TOWN, River Cess â€“ In the quest for reforms to Liberiaâ€™s electoral system, some River Cess voters are calling for adopting a single style of marking ballot papers as a way to reduce invalid votes.

One of such person who spoke to The Bush Chicken is the head of an organization of traditional women in River Cess, Mamie Toe, who said the National Elections Commission should adopt one way of marking ballot papers during elections.

Ballot papers come with instructions asking voters to mark ballots with a checkmark, and â€˜Xâ€™, or their thumbprint. But Toe says this prevalence of options is the reason for invalid votes during these elections.

Toe, also referred to as Zoe Mamie, was speaking to The Bush Chicken at her Toe Townâ€™s residence on July 13 when she made the call for one way to mark ballot papers. She said it will reduce the numbers of invalid votes.

â€œEverybodyâ€™s supposed to use fingerprint to vote,â€ Toe said. â€œSo let the election people [the National Elections Commission] make that law. Every time we vote, the invalid votes can be plenty because we have plenty of ways to vote.â€

Like Toe, the mayor of Cestos City, Vicky Beah, also wants one standard way of marking ballot papers during elections in Liberia. But unlike Toe, who said thumbprints would be preferable, Beah said the National Elections Commission should decide which of the three marks to set as a standard for marking ballot papers.

â€œI canâ€™t say which one of the markings should be adopted,â€ Beah said. â€œBut there is a need for us to have only one way to mark the ballot papers which I think will be easy for all Liberians.â€

â€œI think having only one way to mark the ballot papers will reduce the numbers of invalid votes in future elections,â€ chimed Simon Outland, the head of a disabled rights group in River Cess. â€œIt will also make it easier for those conducting civic and votersâ€™ education.â€

Outland also wants the NEC to make the issuance of tactile ballots a matter of policy. He believes that without tactile ballots, people who are visually impaired cannot make independent decisions as they will always have to take along someone to do the selection for them.

â€œYour vote is your secret but this is not the case with visually impaired people,â€ Outland said. â€œThe person youâ€™re carrying behind there could be your own child, but you cannot trust anyone politically. That person may have his or her choice.â€

Recently, a delegation from River Cess who attended the National Elections Commissionâ€™s two-day civic voter education electoral reform consultation in Buchanan made a presentation where they recommended that NEC adopt one standard way of marking ballots.

However, the concern about the type of mark affecting the number of invalid votes seems misplaced, given that elections guidelines allow any mark to be listed as valid, as long as â€œthe voterâ€™s choice of candidate is clear.â€

During the October 10, 2017 elections, invalid votes accounted for 88,574, or 5.39 percent of the total turnout on polling day. River Cess had the second-highest rate of invalid votes, after Grand Kru, with 7.89 percent of the votes declared as invalid. Counties receiving a high number of invalid votes were in the highly inaccessible southeast region, had low literacy rates, or did not have many urban centers.

It is no wonder that River Cess, being Liberiaâ€™s least urbanized county, would have such a high percentage of invalid votes. Prior to the polls on October 10,Â voters in River Cessâ€™ smaller towns and villages feared there would be a huge number of invalid votes in the county because of the failure of voter educators to reach them. They said voter educators were only seen on main roads and market grounds of larger towns.

The head of civic education in the county confirmed that his team was only targeting larger towns. For a county like River Cess that has only a small percentage of its residents living in larger towns and cities â€“ only 3.34 percent of the countyâ€™s resident live in urban areas â€“ it then makes sense that such voter education efforts would have limited effect.