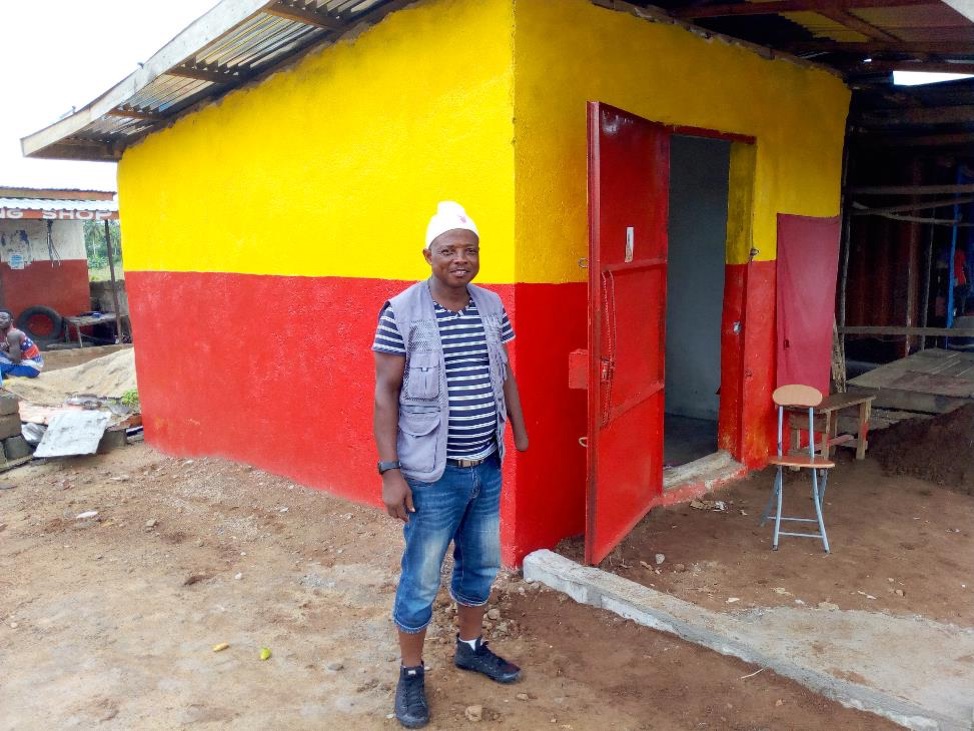 STEWART TOWN, River Cess â€“ Amos T. Boe, a 49-year-old photographer, still wears the wounds from the day in August 1994 when he lost three of his family members and almost lost his own head.

The National Patriotic Front of Liberia rebels, who had overrun River Cess, tried to push him to the ground and threatened to decapitate him. Boe resisted, though he had reason to take the threat seriously: the men had already killed his wife and sister. But when they rubbed a black chalk on his body, he was overpowered.

Boe kept his head on his shoulders, but the rebels used machetes to hack at his skull and chop off his hand. Boe now runs a small photo studio in Buchanan and hides his scar under a white cap, his shortened arm rests on his knee.

Survivors from River Cess, like Boe, are joining growing calls for a war crimes court. Boe hopes such a court would not only try ex-warlords but prohibit them from participating in or winning one of the 15 seats in the senatorial race to be held in October 2020.

â€œI believe when the government approves the court before the election, it will prevent those listed in the [Truth and Reconciliation] report for prosecution from contesting or being elected,â€ Boe said.

â€œThe reason why they are flying around here is because they are plenty in this government. More are even preparing for the coming election.â€

International and national civil society organizations and the United Nations are pressuring the Liberian government to establish such a court. The United Nations Human Rights Committee has given Liberia up to July next year to address crimes committed during the civil war that began in 1989 and ended in 2003.

River Cess was a killing field during the war, with 30 massacres carried out there by different factions during the war, according to the Truth and Reconciliation Commission in its 2009 report. Only Lofa saw more massacres â€“ 32. The report called for war crimes court to try more than 100 people and recommended 50 others be banned from occupying a public office for 30 years.

Boe believes if the government does not approve the war crimes court before that time, more alleged war criminals could be elected.

These political aspirants are competing for positions in the National Legislature where numerous alleged perpetrators already sit. Among them are Sen. Prince Johnson of Nimba, Sen. Sando Johnson of Bomi, Sen. Dan Morias of Maryland, Rep. George Boley of Grand Gedehâ€™s second district, and Margibiâ€™s Sen. Oscar Cooper, who is alleged to have been known as â€˜Captain Marvelâ€™ of the NPFL, a faction that was based in the area where Cooper ran the International Timber Industry at the border River Cessâ€™ border with Sinoe.

Senators hold an enormous amount of power in the National Legislature. The Senate and the House of Representatives play a significant role in shaping and approving legislation that is then sent to the president for final approval. The Senate possesses the power to approve or reject presidential appointments to both the executive and judicial branches and to try all public officials impeached by the House of Representatives. While Liberia is among one of the poorest countries in the world, senators net US$180,000 in salaries, allowances, and benefits.

But the establishment of a war crimes court that would prevent alleged perpetrators from running before the race in October of next year seems unlikely.

Adama Dempster, the former lead investigator at Independent National Human Rights Commission of Liberia, told The Bush Chicken that the Liberian government is yet to give a clear position on the implementation of the TRC recommendations. Like Boe, Dempster believes that this is due to the heavy presence of alleged war criminals in the legislature and other positions of authority. He said the government is currently under pressure from several national and international civil society groups to approve the implementation of the TRC recommendations.

â€œI cannot set a timeframe as to when the government will approve a war crimes court for Liberia,â€ Dempster said. â€œBut all I can say is that, in addition to the advocacy, the international community has given a timeframe for the government to take a decision the implementation of the TRC report.â€ 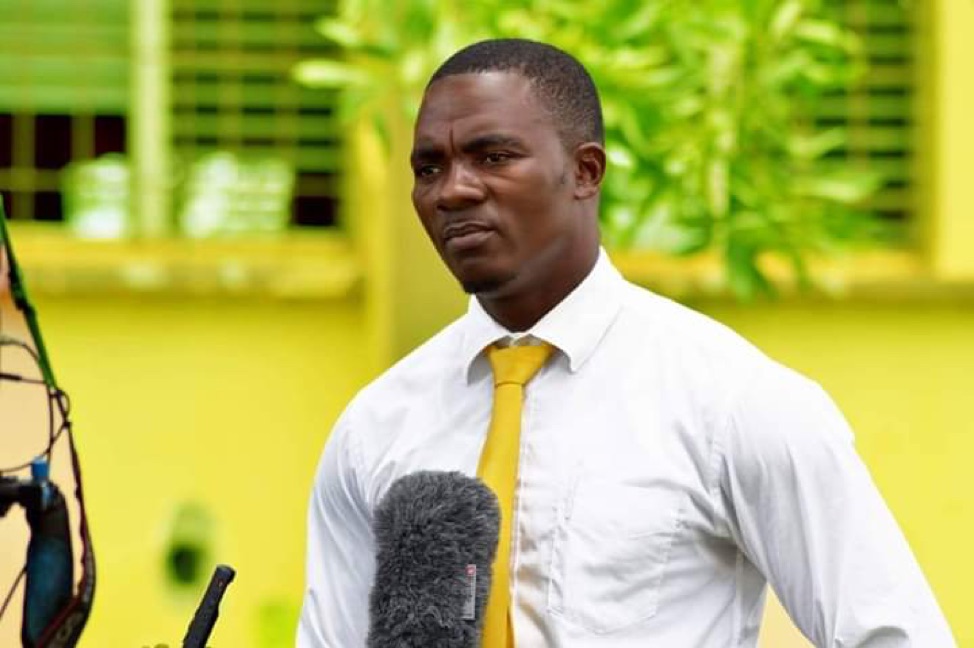 Adama Dempster of the Independent National Human Rights Commission of Liberia said the Liberian government is yet to give a clear position on the implementation of the Truth and Reconciliation Commissionâ€™s recommendations. Photo: Eric Opa Doue

On August 4, 1994, a group of NPFL rebels invaded Boeâ€™s hideout, where he was living with his family of six â€“ including his two wives, his sister, his one-year-old daughter and his brother-in-law. General Fred Barnard and a notorious commander known as â€˜Lamgo,â€™ according to Boe, led the group.

â€œAfter they grabbed us, they said they were going on mission and they didnâ€™t want us to alarm â€“ for that reason we should prepare to die,â€ Boe said. â€œWe begged for mercy, but Lamgo insisted that we all be killed, except for my one-year-old daughter who, according to him, would live to tell the story.â€

Boeâ€™s wife, Sarah Cooker, who was only 17-years-old, was killed first, followed by his 14-year-old sister, Janet Boe. The rebels pushed their guns in the vaginas of both Sarah and Janet to kill them. Boeâ€™s second wife, Margaret, who was 20 at the time, lay unconscious, after receiving so many blows with cutlasses to her head; the rebels thought she was dead. The men then hacked the head of Boeâ€™s 15-year-old brother-in-law Abraham Cooker. Cooker died few months following the incident, according to Boe.

â€œWe could not recognize all of them because they covered their faces with masks,â€ Boe said. â€œThe two commanders, Fred Barnard and Lamgo, were the only people who did not cover their faces.â€

Boe said he never had the opportunity to tell his story to the TRC because he was still suffering from his war wounds and undergoing medical treatment during the time of the hearings.

General Fred Barnard, who is said to have headed the NPFLâ€™s Jungle Lion brigade in the ITI area, is dead, but Lamgo, his deputy, currently lives in Fituah, one of the gold mines in Grand Bassaâ€™s third district. The Bush Chicken managed to track him down. When approached for comment about Boeâ€™s allegations, the former rebel was hostile and threatened the reporter.

â€œWhy yâ€™all always looking for me, da my one fight this war?â€ Lamgo said as he walked away. â€œAll the people da fight this war yâ€™all canâ€™t see them? Only Lamgo? If you respect yourself, just record me or take my picture da the time you will know the real Lamgo.â€

Boe now lives in the port city of Buchanan, where many ex-combatants live. He said though he has not seen Lamgo, he gets angry whenever he sees any former rebels, particularly those who sit in the legislature.

â€œThe fact that we still have those warlords in our legislature, the government will not approve that court now,â€ said George Trokon, the head of civil society organizations in River Cess. â€œThat is the more reason why we as civil society actors need to join the international CSOs to mount more pressure and for us to sensitize our people not to elect or reelect any more alleged war criminals.â€

Trokon said he foresees direct and indirect victims of the war turning to violence if they continue to see alleged perpetrators in their communities walking free, and if the government fails to implement the TRC recommendations.

An aspirant for the River Cess seat, Jonathan Banney, who is a former superintendent and senator of River Cess, is the eleventh name on the TRC list of â€œmost notorious perpetratorsâ€ recommended for prosecution. Heâ€™s being accused of ordering West African peacekeepers to torture some elders in Central River Cess District. However, Banney said he did not order soldiers from the ECOWAS Monitoring Group, known as ECOMOG, to torture anyone.

â€œI challenge anyone to tell me which rebel group I was part of during the war,â€ Banney said. â€œThose whoâ€™re saying it â€“ what part of Liberia I held gun to say I was fighting war. That was a mistake on the part of the TRC because at no time I ordered ECOMOG to torture anyone. Thatâ€™s lie.â€

Bob Kofi Zar, another former NPFL general who admitted his involvement in the war, though not listed by the TRC for prosecution, has contested twice for a representative seat for River Cessâ€™ second district but has never been elected. Zar is the current speaker of the Chiefs and Elders Council of Liberia and senior paramount chief of River Cess.

Boe believes if war criminals are banned from political offices as recommended by the TRC, that would serve as a deterrent for would-be troublemakers in the country.

â€œIf the government does not work on the TRC report, we the voters can start by rejecting those who went in the bush and killed us, raped our sisters and destroyed our future by voting against them,â€ Boe said. â€œThis will serve as a deterrent for anyone who will want to ascend to power through violence.â€

Editor’s note: this article has been edited to reflect that Adama Dempster no longer works with the Independent National Human Rights Commission. This story was a collaboration with New Narratives as part of the West Africa Justice Reporting Project.