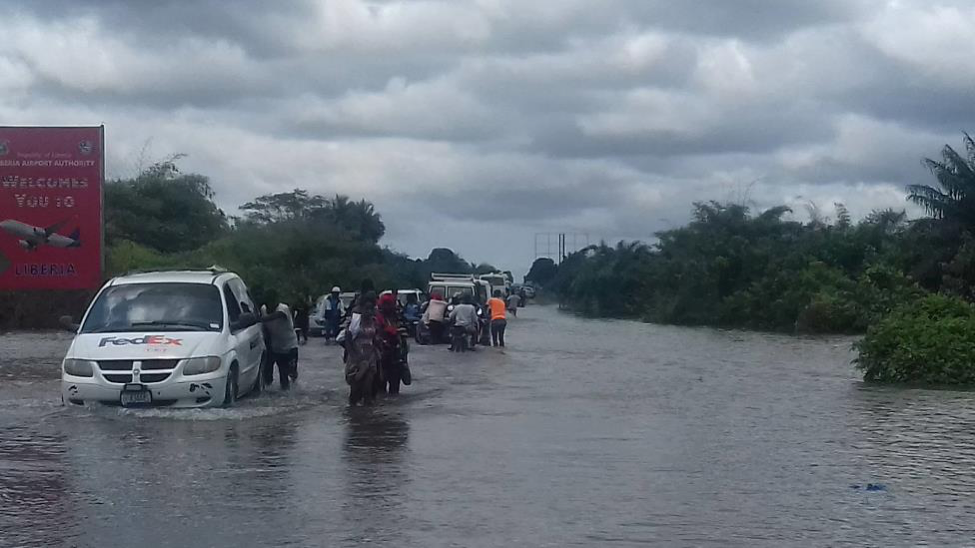 UNIFICATION CITY, Margibi â€“ Flood has again hit the Robertsfield Highway, impeding the travel of commuters along the route.

The highway is the gateway to Liberiaâ€™s capital from the countryâ€™s only international airport, the Roberts International Airport.

The high water level led to the deployment of personnel from the Navy Battalion of the Armed Forces of Liberia. The AFL personnel used a boat to cross those traveling from one destination to the other.

Drivers with low vehicles on Friday, September 15, 2017, cut off the engines of their cars while locals charged L$150 (US$1.28) to push them across the water. Speaking to The Bush Chicken on the scene of the flood, Unification Cityâ€™s Mayor Esther Kiawu said she is not surprised by the flood as it is a recurrent problem.

In June of last year, a similar flooding occurred along the highway as heavy rains left several homeless and properties damaged. The water also damaged the engines of several vehicles driving through the water. Others simply became stuck in the water due to breakdowns.

â€œWe are tired witnessing such a disastrous situation that the government has failed over the years to find a remedy,â€ she added.

Kiawu said for years, the people of Unification City and surrounding communities have been affected by flooding, yet there is still not a solution to curtail the problem.

She said she has informed Margibi Superintendent John Zubah Buway and that he has requested her to get the names of family heads affected by the floods.

She said with the exception of some representative candidates Margibiâ€™s second district, the affected communities are yet to receive aid from local and international NGOs.

She named James Lomol, Ivar Jones, Marcus Speare, and incumbent lawmaker Ballah Zayzay as the candidates who have so far assisted the victims.

Joe Blow Town, Dolo Town, Unification City, Peter Town, and Barclay Farm are the communities in Mboo Statutory District that are heavily hit by the flood.