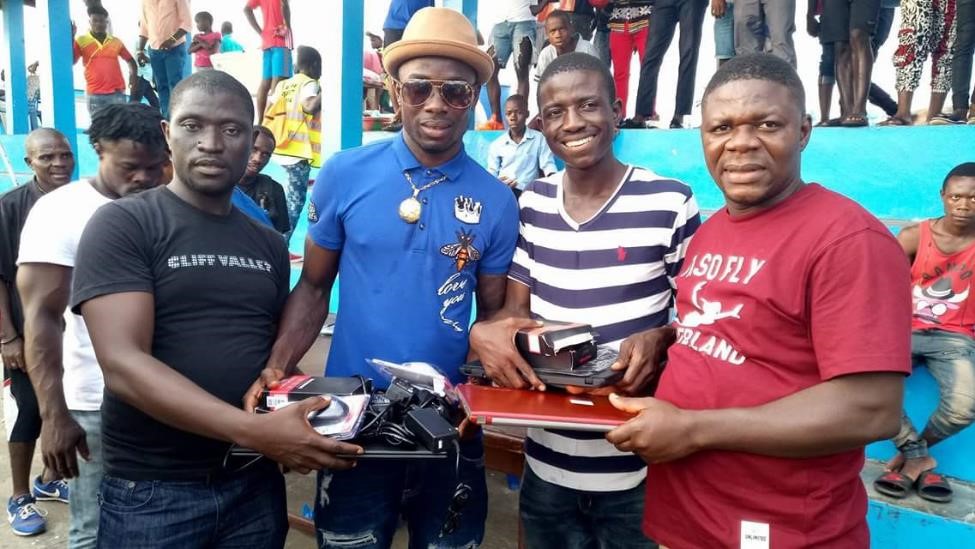 MONROVIA, Montserrado â€“ Chinese-based Liberian forward Sam Johnson might be financially enjoying the golden days of his soccer career of recent, but the 24-year-old attacker has not forgotten the media that has been reporting on him since he started his career and moving abroad for greener pasture.

Johnson, who plays for Chinese League One club, Wuhan Zall, took the Sports Writer Association of Liberia by surprise when he donated three new laptop computers and four mini digital recorders at the Blue Field in the PHP Community where his youth team, Sam Johnson Foundation was playing against CT United in a friendly match.

The former Nimba FC and Djurgardens attacker said the donation was his way of identifying with the sports writing body for their support towards his career over the years. He said this was the first step of the many plans he has for SWAL. He praised members of the association for following the activities of Liberian players abroad.

Receiving the items on behalf of SWAL, the vice president of the association, Moses Kollie Garzeawu, thanked the Lone Star attacker for his contributions and urged other foreign players to follow the good example of Johnson. Garzeawu noted that the items would be used for the intended purpose.

Johnson moved to China in 2016 from Swedenâ€™s top tier club, Djurgardens IF for an undisclosed fee that was later believed to be around 30 million Swedish Krona (US$4 million), according to Swedish online media outlet, StockholmDirekt.

He joined Wuhan Zall on a three-and-a-half-year deal. Chinese football has been making huge investments lately, attracting several world class players from the English Premier League, the Spanish La Liga, the German Bundesliga, and the Italian Serie A.

Johnson is believed to be among some of the top earners in the first division. His current contract with the Chinese club will be expiring in December 2019.

Johnson has been in the country on vacation for over a month since the end of the 2017 Chinese League One season, where his club failed to secure a place for promotion to the Chinese Super League. Wuhan Zall finished the league at the fifth position on the 16-team table with 47 points from 30 games, 17 points behind champions, Dalian Yifang, which is the former club of fellow Liberian international, Sekou Jabateh Oliseh.