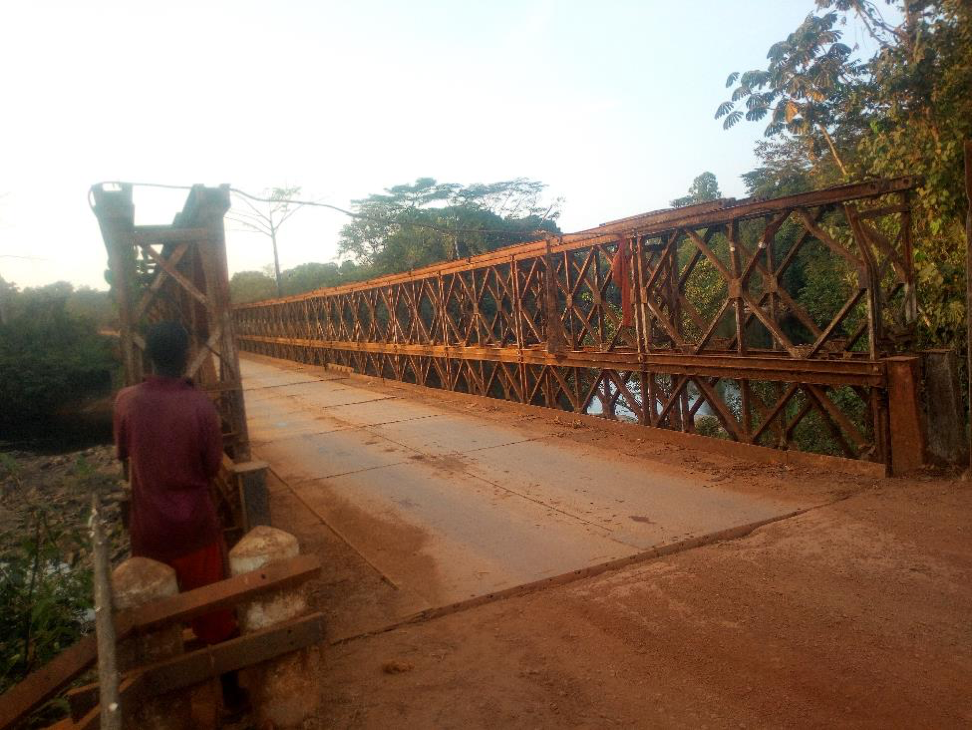 YARPAH TOWN, River Cess â€“ River Cessâ€™ Sen. Dallas Gueh has told The Bush Chicken that discussions are ongoing to replace the Timbo River Bridge that connects Grand Bassa to the southeastern region of the country.

Parts of the bridge recently collapsed in June 2017, cutting off that route to the southeast and raising prices of goods such as rice by 40 percent. The Ministry of Public Works eventually repaired the bridge, with assistance from companies operating in River Cess, but the bridge is long overdue for a replacement.

Constructed in 1972, the bridge is now rusty and most of its steel plates are disconnected from the beams. Bolts and nuts holding the braces of the bridge have all fallen off and one can see the braces hanging from under the bridge. The Timbo River Bridge is in need of replacement. Photo: Eric Doue

Gueh noted that a new Bailey bridge, a type of pre-fabricated bridge, would soon be brought to replace the existing bridge.

“The new bridge to replace that one is already in the country,” he said. “In the soonest and possible time, the materials will be transported to the site.”

He noted that it will take three weeks to assemble the new bridge and that the route through River Cess to the southeast will be closed for that period.

The only alternate route for travelers heading towards Buchanan, Grand Bassa from Cestos, River Cess is the LAC Road from through Monweh, in Upper River Cess. That route, however, takes 10-12 hours, a significant increase compared to the usual two-hour journey from Cestos to Buchanan under normal conditions.

Until the bridge is replaced, authorities have restricted heavy vehicles from crossing the bridge; however, that restriction is proving difficult to enforce. County Inspector Trokon Browne assigned the Community Watch Forum to the bridge with a mandate to ensure that all heavy duty vehicles are offloaded before crossing the bridge, but this is not happening.

Members of the Community Watch Forum, a group trained in basic crime response techniques to supplement the Liberian National Police in their respective communities, have complained that operators of heavy-duty vehicles have refused to listen to them.

“When we stop the people, they can’t listen to us,â€ said Joseph Yaepleah, one of the groupâ€™s members. â€œPlank and log trucks always cross the bridge without offloading.” Trucks have been ignoring the mandate to offload heavy vehicles before crossing the bridge. Photo: Eric Opa Doue.