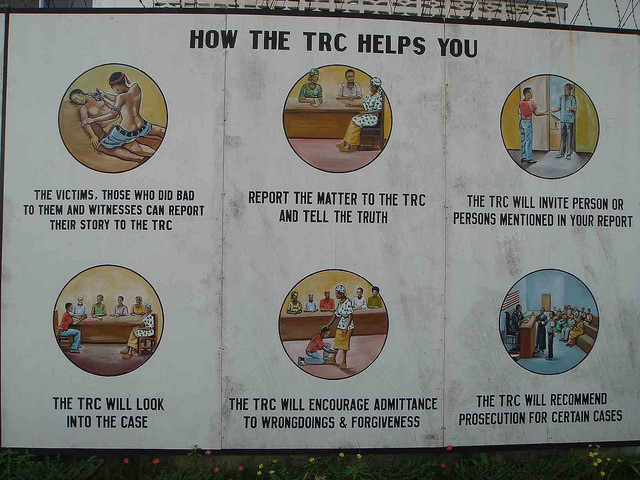 GANTA, Nimba – Senator Thomas Grupee has told reporters that he is not in favor of establishing a war crimes court in Liberia, as part of the implementation of the Truth and Reconciliation Commission recommendations.

The senator’s statement follows President Ellen Johnson Sirleaf’s letter to the legislature on the implementation of the Truth and Reconciliation Commission report. The final report, available here, includes a clause that suggests implementing a war crimes court in Liberia.

Speaking to the Voice of Gompa’s Friday morning show, Daybreak Gompa, Grupee outlined several reasons why he thought the war crimes court should not be established.

“Although the president has submitted the report to plenary for revision, I take keen exception to its implementations,” Grupee said. “We have enjoyed a high level of peace for over ten years, and we are not prepared to go into any chaos.” Nimba’s junior senator said Liberians are “gradually forgetting the ugliness of the civil war” and a war crimes court would only open old wounds.

“The timing is wrong,” Grupee added.

Implementation of the TRC recommendations would likely be political suicide for Grupee. His constituency strongly supports Nimba senior senator Prince Johnson, a former warlord who was captured on film ordering the torture of former President Samuel K. Doe. Johnson placed third in Liberia’s previous presidential elections due to the massive support he received in Nimba and pockets of the country he controlled during the civil crisis.

The Truth and Reconciliation Commission was proposed in the Accra Comprehensive Peace Accord in 2003 to investigate war crimes and crimes against humanity perpetrated during the Liberian civil war from 1989 to 2003.

In 2010, the TRC concluded its mandate and submitted its final report and recommendations to the Government of Liberia.

Former president Charles Taylor, who was a key player in the crisis, has not been able to testify at the TRC about his involvement in the civil war. The inability of the TRC to address Taylor has garnered some criticism.

Taylor headed the National Patriotic Front of Liberia rebel group and was convicted of 11 counts by the Special Court of Sierra Leone for his involvement in the neighboring country’s civil crisis. He is currently being held in the United Kingdom after being sentenced to 50 years in prison.