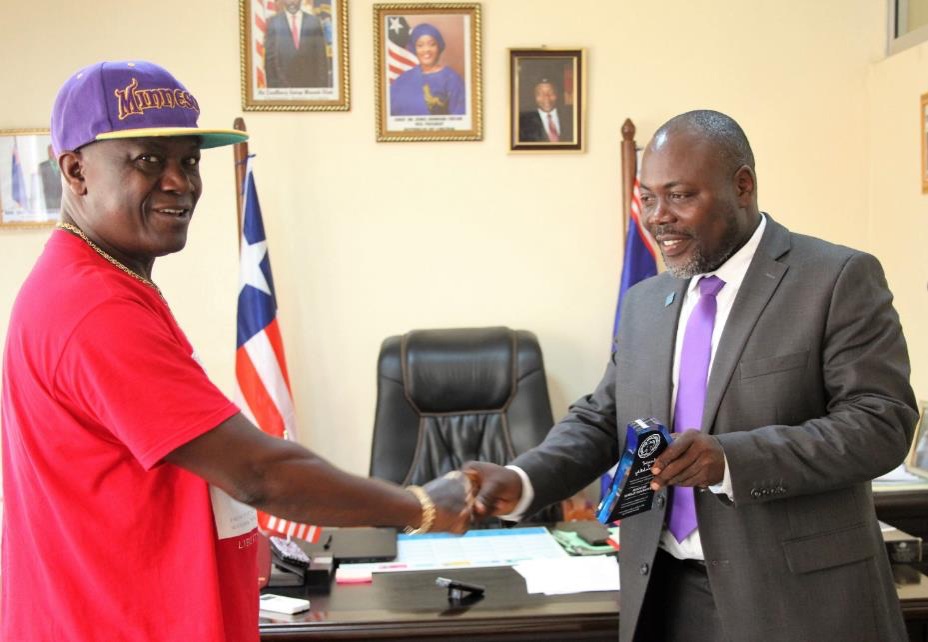 BUCHANAN, Grand Bassa â€“ Grand Bassaâ€™s Sen. Jonathan Lambort Kaipay has received an award from the U.S. chapter of the Joint Christian Choir Association International, a group of Bassa Gospel singers with chapters in Grand Bassa and the Americas.

The Award of Amicability was presented in the senatorâ€™s Capitol Building office on Capitol Hill in Monrovia on Tuesday, September 10, 2019.

The award, according to the association, is in appreciation of Kaipayâ€™s â€œselfless contributionâ€ to their Triennial Convention.

â€œWe have Senator Kaipay, who has been very acquainted and functional with our organization,â€ said Mongardo Cephas, the U.S. chapterâ€™s national president during his presentation of the award. â€œHe has always supported JCCAI in every capacity.â€

Cephas said while the senator could not attend the organizationâ€™s previous convention, his enormous contributions to the faith-based organization is a clear indication of a good leader who cares for his people at home and abroad.

He said Kaipay has always briefed Liberian citizens residing in the U.S. about the current development status of their motherland and what could be done to enhance development. Additionally, he said the senator always encourages those Liberians to make a positive impact back home through programs that will accelerate development and foster peace.

Receiving the award, Kaipay thanked the organization for the award. He dedicated the award to the people of Grand Bassa County who gave him the opportunity to serve.

â€œWe want to say congratulations to JCCAI for motivating us,â€ he said. â€œWe see this plaque or award as a challenge because when the Bassa people called us in 2014 to duty, we needed no invitation to go beyond. Today, the presentation of this award says to us that our life should shine, and the light should make [a] greater impact [on] the lives of others.â€

The Grand Bassa senator said he would continue to encourage Liberians abroad to contribute to the growth and development of the country.

Sharing
Tags Jonathan Kaipay
Contributions to The Bush Chicken are not tax deductible.