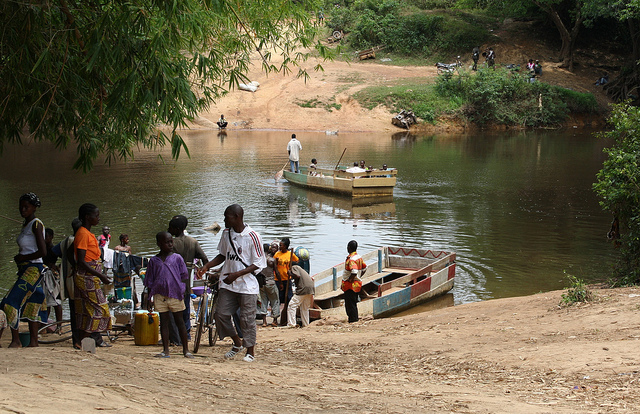 ZWEDRU, Grand Gedeh â€“Â At least four Ivorians and two Burkinabes are in the custody of the Bureau of Immigration and Naturalization for illegally entering Liberia through a Grand Gedeh border.

The individuals were alleged to have been farming on Liberian soil.

Based on a tip from traditional hunters, on April 28, officers of the Emergency Response Unit at the BIN arrested the farmers at cocoa farms in Bhai Administrative District forest region. The area is more than a 20km into Liberia from the Cavalla River, which separates Liberia from the Ivory Coast.

Officials at the BIN told The Bush Chicken that only six were arrested, but there were over 40 persons carrying out illegal farming activities in the forest. William Vimton, the BIN regional commander in Grand Gedeh County, confirmed the reports to The Bush Chicken, in an exclusive interview.

He said that the detainees were being well taken care of and will remain in custody until he receives further directions from Monrovia.

The Ivorian nationals hail from Saobli, Pantroya and Bakoubli, all neighboring towns to Liberia. There are 11 entry points in Grand Gedeh County alone, and that makes it problematic in curbing illegal entry by non-Liberian nationals.

Although limited in resources, Vimton said the force is applying its best efforts to prevent illegal entries and maintain safety at the border points.

Vimton lauded the support of the national leadership of the BIN but called for more logistical support. He said that improvements in logistics to the regional commands would improve operations and safety at border points in the country.

Last month, the acting commissioner of the Bureau of Immigration and Naturalization, Peter Zayzay, said that the government started training 3,000 additional officers for deployment at its borders.

Sharing
Tags Bureau of Immigration and Naturalization, Peter Zayzay, William Vimton
Contributions to The Bush Chicken are not tax deductible.