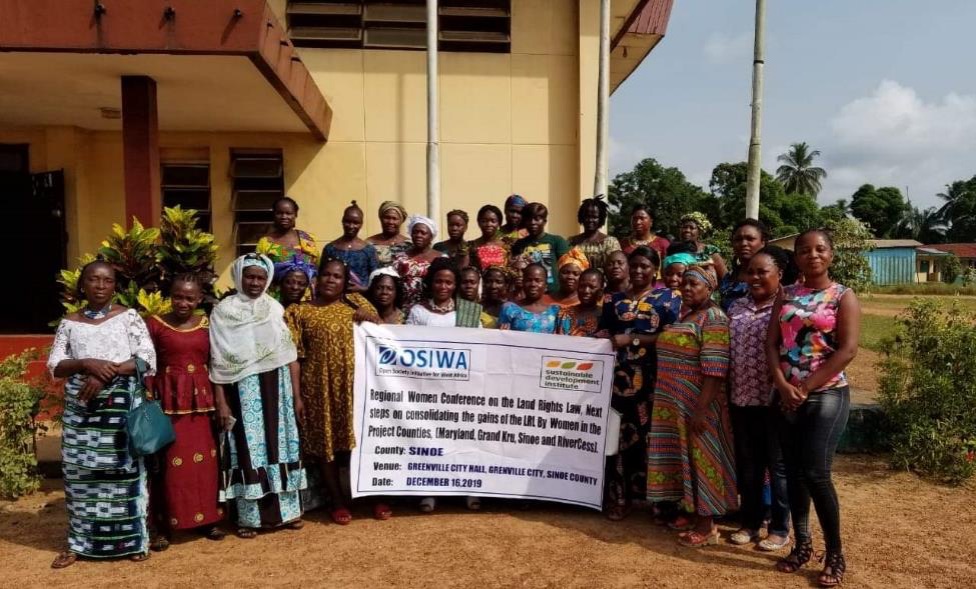 GREENVILLE, Sinoe – A group of women from Maryland, Sinoe, Grand Kru, and River Cess have announced their resolve to establish a sub-regional advocacy platform for women’s rights to customary land. They note that there is growing marginalization of women’s rights to land by local leaders despite the passage of the Land Rights Act.

Following a two-day women awareness conference organized in Greenville, Sinoe by the Sustainable Development Institute, in partnership with the Open Society Initiative of West Africa, the women said their rights are disrespected in matters and negotiations of land ownership between communities and foreign concession companies operating in the counties. They also noted that they are not represented in community decision-making processes, which cede community lands to foreign firms. These violations, they said, are what drove their decision to organize an independent advocacy platform in December 2019.

“We, the delegates from Maryland, Grand Kru, Sinoe, and River Cess attending the Regional Women Conference from December  18th and 19th 2019, engaged in experience sharing on women’s roles and responsibilities in decision-making processes in the region, and the role of other stakeholders in the context of customary land rights,” the opening paragraph of the women’s resolution read.

The women’s resolution at the conference represents a bold move. It is yet another push for women’s rights to take center stage in natural resource governance and management, especially those relating to land lease agreements. The resolution also called upon the Liberian government to discourage the further expansion of large concession areas in the region until proper and inclusive negotiations are done.

There was also calls on the government to compel all concessionaires, including those involved in forest, oil palm, and mining operations, to respect the collective rights of customary landowners and users, and to conduct themselves in ways that enable communities to secure benefits from their natural resources.

The superintendent of the Liberia Marketing Association in Grand Kru, Sophia Gray, told the gathering that women in her county are still not granted full rights to own customary land by local leaders, despite the passage of the Land Rights Act.

“Now, in Weboken Community here in Barclayville City, women do not have rights to own land on grounds that it is their traditional norm,” Gray said. “As we speak, a lady in that community in the person of Manle is being denied for house spot to build her house by the elders of the community.”

Teta Lloyd, another woman who serves as president of the River Cess’s Rural Women Association and head of the county’s delegation to the conference, also complained that women in her county were being denied the right to participate in land-related decision-making in River Cess.

“From the experiences, we have had from the women in Sinoe, Grand Kru, and Maryland relating to women rights violation by local leaders and companies, we will make sure that any company that will enter the county for investment – we, women will play key roles base on the knowledge we got from SDI today,” Lloyd said.

As a national non-governmental development organization, the Sustainable Development Institute has been working to ensure transparency, accountability, and women’s participation in natural resource management in Liberia.

The organization’s monitoring and evaluation officer, Morris Nyein, said the aim of the regional women conference was to discuss the Land Rights Act and to teach women various methods of engagement and settling conflicts arising from land ownership.

The organization’s executive director, Nora Boweir, also told The Bush Chicken that her organization has a mission to positively alter the decision-making processes around natural resource management, in the interest of grassroots communities, and to promote equity in the distribution of benefits derived from natural resource exploitation.