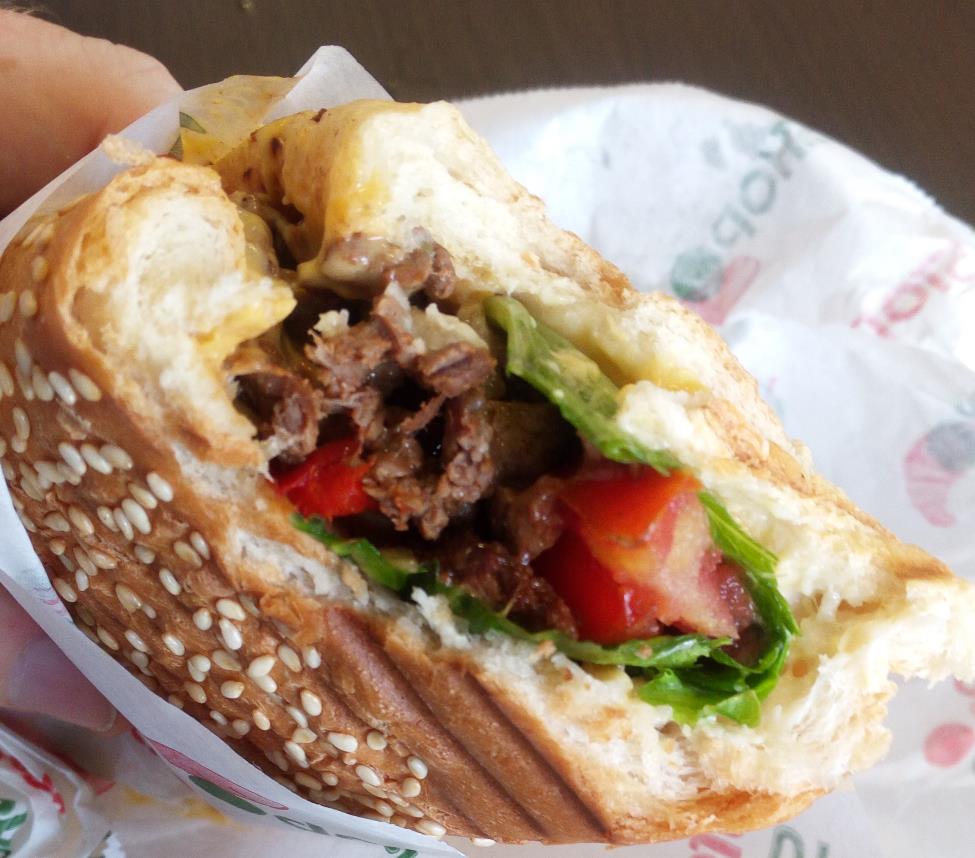 A pickle and a shot of espresso.

A tale of this incongruous snack, consumed by a former colleague, is how the splendid little delicatessen at Stop & Shop was first introduced to me (although Iâ€™m not inclined to try that combination myself).

Probably more than anywhere else in Monrovia, if I want a taste of home (the US), Stop & Shop delivers, with its shredded and ground meats lathered in cheesy chili sauces ensconced amidst freshly baked bread.

The deli is nestled in the left-hand corner of the Stop & Shop supermarket in Sinkor. Itâ€™s not a big space, but it rarely gets crowded and there are almost always free chairs at one of the six tables. Coming in just ahead of Dianaâ€™s, which is buoyed by its vastly superior shawarma, the Stop & Shop deli wins the contest for best Monrovia sandwiches in my estimation.

In late 2015, I developed a routine where Iâ€™d walk from my office at the University of Liberia to Stop & Shop, leisurely munch on a sandwich, and then catch a ride home to Old Road as the traffic would significantly improve by that time of the evening.

By itself, nothing is really remarkable about the deli, yet evaluated in a package, it has several distinctive features that allow it to stand out from its competition. In many ways, it closely resembles Monroe Chicken, without the obsequious wait staff â€“ although service is still attentive and friendly. The sandwiches at the two institutions taste fairly similar, prices are equivalent, and both have large screen TVs playing Trace music videos. However, there is one crucial difference between the two:

Stop & Shop deli has an array of beef products on its menu!

These include not only sandwiches but also burgers. Ordering a hamburger in Liberia is a questionable proposition, but if you are going to do so, Stop & Shop is the place to bravely venture into unchartered territory. The buns are firm with the right amount of thickness and are filled out with a robust patty that makes its presence known.

The only one that Iâ€™ve sampled is the BBQ burger. It was pretty decent, topped with bacon and onion rings â€“ a nice twist that I donâ€™t think is an option at spots like Central Monroviaâ€™s King Burger. Other burgers on the menu include ginger-avocado (which is at the top of my list to try), Cuban (has jalapenos and a special â€˜Cubanâ€™ sauce), honey mustard, and an option that is smothered in Cypriot halloumi cheese. The menu consists of just over a dozen items, roughly evenly split between burgers and sandwiches. Price are very reasonable, in the US$6-$8 range. Options like chicken wings, a full chicken, and fries are available as well. On my latest visit, there was even a small selection of doughnuts available.

My favored options are either the Philadelphia or Philly steak. Each comes in a baguette-shaped piece of bread, roughly ten inches long, always fresh. The primary stuffing is meat, complemented by a modest selection of vegetables. I usually go for the Philadelphia as the gooey cheese whiz helps to satisfy my dairy cravings. Both are succulent, leaving a nice juicy pool to soap the end of the sandwich in.

My favorite touch is that the bread is toasted (which I donâ€™t think is done at Dianaâ€™s â€“ or if it is, not as artfully). Iâ€™m a slow eater and this ensures that for the duration of my comparatively prolonged eating experience, the sandwich maintains a warm and gooey center.

For the best hamburgers and sandwiches in Monrovia, I highly recommend a visit to the surprisingly satisfying Stop & Shop.