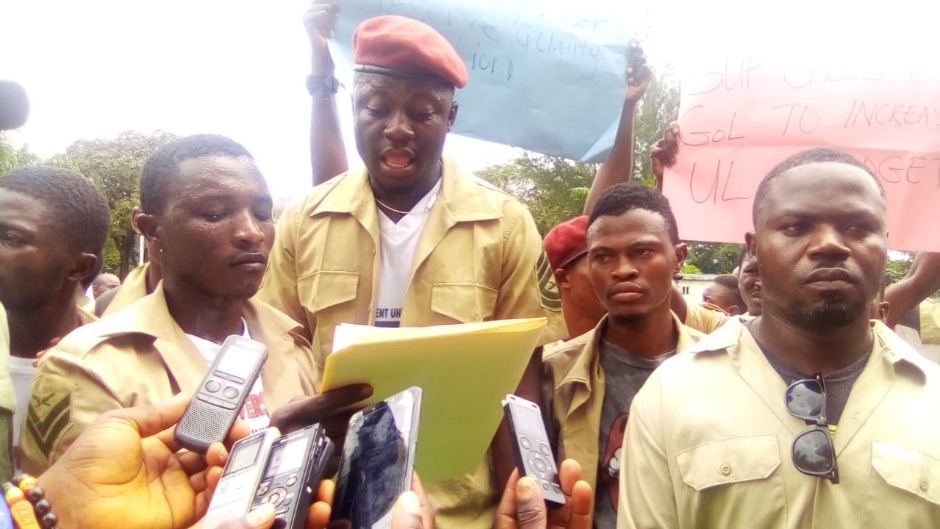 MONROVIA, Montserrado â€“ A University of Liberia student group, the Vanguard Student Unification Party, is demanding that the legislature increase the institutionâ€™s budget.

The group stormed the Capitol Building on Monday, September 23 to express concern over the plight of the over 19,000 students attending the university.

The group said it is unjustifiable and unrealistic for the legislature and the Ministry of Finance and Development Planning to reduce the University of Liberiaâ€™s 2019/2020 budget. The legislature is currently deliberating on the National Budget, which is now past its deadline for approval.

According to the student group, the governmentâ€™s action to reduce instead of increasing the budget of the university will greatly undermine the activities of the already financially crippled university.

â€œAs we speak now, the staff of the university are yet to receive their salaries since the month of August, as well as funds that were deducted from their salaries, which led to their go-slow action in July of this year,â€ said Mohammed Deygbo, who was representing the group.

Deygbo said the group sees the attempt to reduce the universityâ€™s budget as a confirmation that Liberia is being governed by leaders who lack interest in the state.

He criticized the â€œpolitically announcedâ€ free tuition that President George Weah had pushed for, but which has ultimately had a negative effect on tertiary institutions in the absence of extra funding.

â€œIt will interest you to know that at the time the university was not under the tuition-free [status], it regularly received US$16 to 17 million, with all of the fees collected from students and subsidies received from various companies and businesses, yet the institution was still challenged financially,â€ he said.

Deygbo since tuition was waived, companies and other individuals that used to provide subsidies to the school are no longer providing such support. He said it is unacceptable to reduce the budget of the university when the president is not supporting his tuition-free policy.

He said while students at the A.M. Dogliotti Medical School lacked access to stable electricity and a monthly stipend, Speaker Bhofal Chambers and the president pro-tempore are flush with fuel cards and phone scratch cards.

He said while students cannot commute from Redlight to the schoolâ€™s Fendell campus, 103 lawmakers have a budget of over US$184,000 each.

â€œIndeed, it is now clear that the Weah-led administration does not valueÂ interest in education, therefore it has chosen to jeopardize the future of over 19,000 students,â€ he added.

Deygbo said the university risks closure due to lack of funding: â€œAs we speak, the university is reducing teaching staff â€“ that has led to reduction in sections submitted by various departments.â€

Deygbo called on the government to increase theÂ universityâ€™s budget to US$21 million. He said this should be feasible, given that Finance Minister Samuel Tweah, â€œwho is yet to account for US$25 million, has increased his budget from US$80 million to over US$84 million while Pres. Weah and his Vice President Jewel Howard-Taylor have a budget of over US$4 million, but yet you cannot give the state-run university that has four campuses US$21 million.â€

The student group maintains that the learning environment at the university remains subpar. Deygbo said students are sitting in classes with rats and cockroaches while buildings leak when there is rain. He said if the budget of the university is not increased, students will assemble at Capitol Building to demand their right to a quality education.