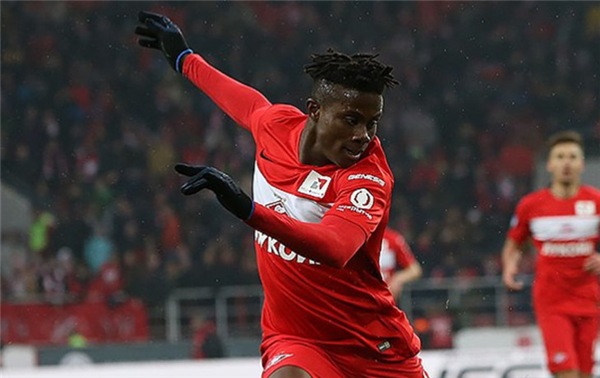 After two league games with a draw and a defeat, Sylvanus Nimely finally celebrated his first three points with his club in a difficult away match against another top side, Zenit Saint Petersburg over the weekend.

Spartak Moscow II was able to walk away with all three points after a hard fought 2-1 win. Goals from Russian attackers Georgi Melkadze and Artem Fedchuk in the 3rd and 44th minutes were enough to boot out Zenit, which got its lone goal in the 85th minute through Iiya Zuev. The victory took Spartak from sixth to fifth on the league table with 44 points from 29 games.

Since his move to Russian football heavyweight, Spartak Moscow, has won the attention of his technical staff with his quality of play. Despite being signed to play for the Spartak junior team in the Russian National First Division, the second tier of Russian football, he has already made his debut for the senior side. He played 38 minutes in Moscow’s 2-1 loss to Serbian Super League side, Red Star Belgrade.

The 18-year-old also managed to win just a point with his side in his debut match against state rival Dinamo Moscow. He came on as a substitute in the 68th minute, replacing Vladislav Panteleev. His work on the pitch in for the 22 minutes of play against Dinamo earned him a place in the starting eleven in round 27 of the Russian National First Division at home against Baltika. Nimely played the full 90 minutes but was unable to stop his side from losing 2-1.

Nimely will go in search of his first league goal while Spartak Moscow will hope to get their second successive win on Saturday, April 8 at home against Volgar Astrakhan.

EcoBank Delays Shutdown in Lofa by One Month