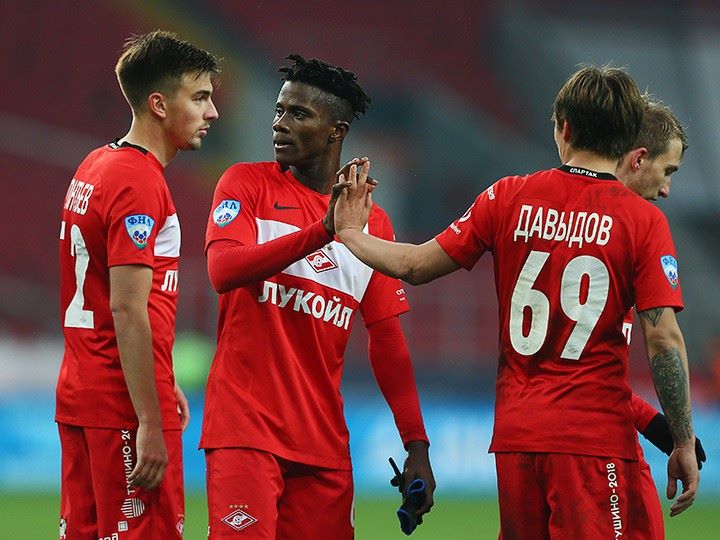 Less than a month after making his official league debut for Spartak Moscow II in the second tier of Russian football, the captain of the Liberia National Under-20 football team, Sylvanus Nimely, has made his debut with Spartak Moscow, the senior side of Spartak Moscow II.

The former Monrovia Club Breweries attacker made his debut over the weekend in a friendly match between 27-time Serbian Super League champions Red Star Belgrade and Spartak Moscow at the Rajko Miltic Stadium.

Nimely came on as a substitute in the 59th minute, replacing 23-year-old Russian-born midfielder Artyom Samsonov but he couldn’t prevent his side from suffering a 2-1 defeat on the road, despite taking an early lead.

Paraguayan forward Lorenzo Melgarejo put Spartak ahead in the 25th minute before Red Star leveled the score within a minute to end the first half. The Serbian side got the equalizer through Gabonese attacker Guelor Kanga, who scored with a long-range shot.

Red Star came out of the break with another goal in the 55th minute that Spartak Moscow was unable to redeem until the end of the match. Serbian forward Nemanja Milic scored the only goal in the second half, which condemned the Russians to a defeat.

Sylvanus described his senior debut as an amazing one, as it was against one of Europe’s top clubs. He told The Bush Chicken that he would continue to work harder to enter the senior side of Spartak Moscow.

Nimely has returned from Serbia with the Spartak Moscow senior side to join his teammates in training ahead of their tough league fixture against Zenit Siant Petersburg II in round 29 of the Russian National First Division.