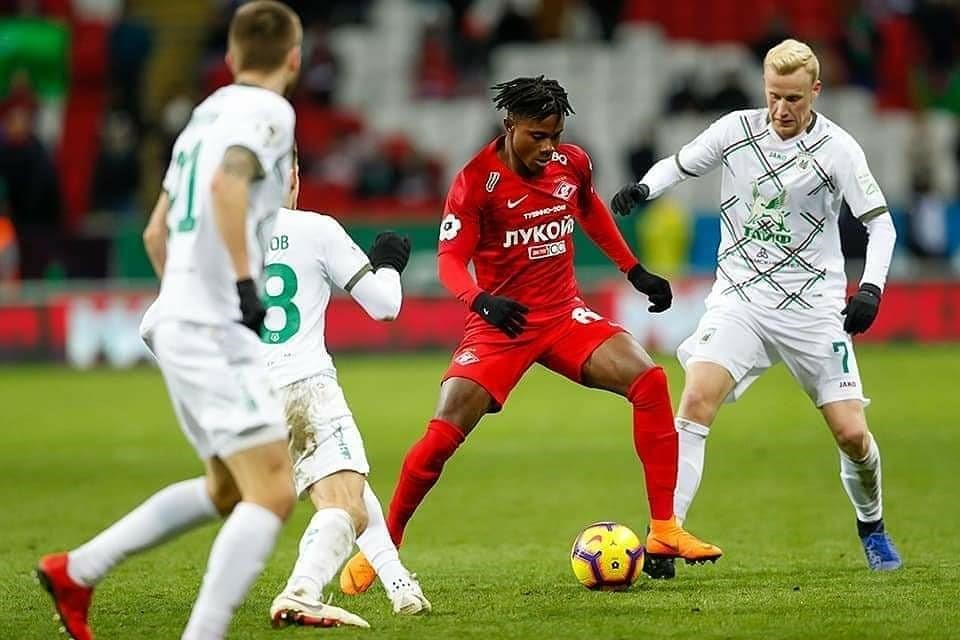 Two years after leaving the Czech Republic to sign for Spartak Moscow in Russia, Liberian international forward Sylvanus Nimely has finally fulfilled his long-awaited dream of playing in the top flight of Russian football, the Russian Premier League.

The former Monrovia Club Breweries forward came off the bench on Monday, October 27 to help Spartak Moscow to a 1-1 draw away at Rubin Kazan. Nimely was introduced in the 57th minute, replacing Algerian international Sofiane Hanni.

When he was introduced in the match, both teams were at a goalless draw. Twenty minutes after his introduction, the Moscow-based team got the lead from the spot through Dmitri Kombarov. Rubin Kazanâ€™s midfielder, Vitali Ustinov, touched the ball in the penalty box to help bring Moscow that moment they were waiting for.

Not only was the game against Rubin Kazan Nimelyâ€™s first Premier League game but it was also his first official game for Spartak Moscow. Since his transfer to Russia in 2016, the 20-year-old has been a regular player for Spartak Moscow II in the second tier of Russian football. Nimely moved over to Spartakâ€™s feeder team to have the playing time which he lacks with the senior team. Despite playing for the feeder team in the first division, Nimely is cleared for selection by the senior team in the Russian Premier League and the Russian cup games.

Since his debut with Spartak Moscow II in 2016, the young forward has played 55 league matches and scored ten goals. His performances over the years might have been overlooked by Spartakâ€™s former coaches but his four goals in 14 games this season for Spartak Moscow II has caught the attention of the newly appointed coach, Raul Riancho.

In an interview with The Bush Chicken after his debut for Spartak Moscow, Nimely said he was grateful to God for his first game for Spartak Moscowâ€™s senior team. He said now that he’d gotten the experience of playing in the Premier League, itâ€™s about time he works harder than ever before to remain with the senior team and have more game time under his belt.

â€œEver since I arrived in Russia, I have hoped for a moment like this,â€ he said. â€œIt may have taken a bit longer time, but I feel itâ€™s the right time because God works at his own time. It was really nice, and itâ€™s a big motivation for me.â€