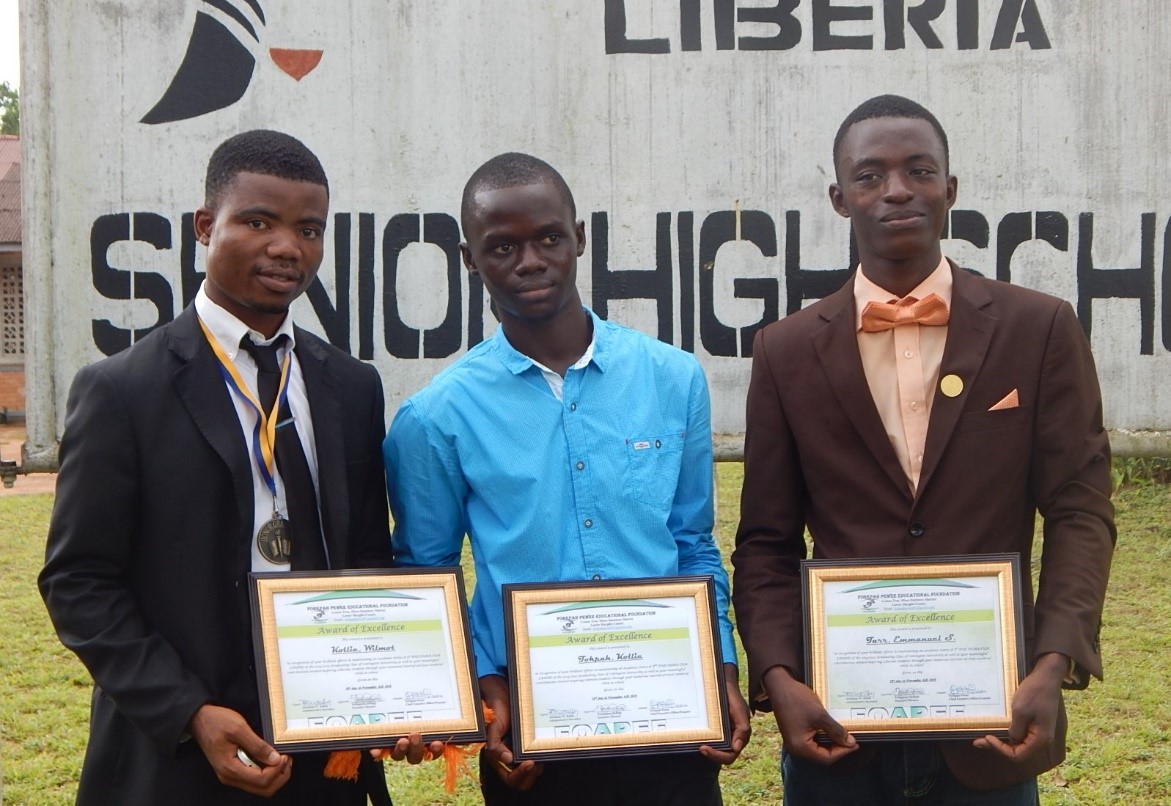 The three men were recently honored by the Forkpah A. Pewee Educational Foundation for their achievements at the university.

The foundationâ€™s Executive Director Forkpayea Mulbah saidÂ the achievement of the three Firestone-Liberia Senior High School graduates was a milestone in the history of the company.

â€œIf no one recognizes the great performance of these comrades, we from the FOAP Educational Foundation do so with great honor,â€ he added.

Mulbah said the three graduates “have solidified our argument on why we think Firestone is making numerous contributions toward the educational sector of this country and toward human resource development.â€

He considered the honorees’ achievements as clear indications that Firestone remains a top ranking educational institution in the country.

Firestone had initially awarded scholarships for the three men to attend Cuttington after they were among the five best performing students graduating from the high school in 2011.

Valedictorian Emmanuel Tarr spoke on behalf of the honorees and said they were honored by the recognition.

He said the awards given to them should serve as a challenge and motivation to students of the school that they too can do better.

â€œI believe that because we are being honored, you will be challenged to do even more,â€ he told the gathering of Firestone students.

â€œNever be misled that our days at Cuttington was so easy, it is challenging to compete among students from several different stronger institutions,â€ he noted. Tarr hailed the foundation for the honor and promised to always bring pride to their sponsor, FirestoneÂ and its school system.

Meanwhile, Gayflor praised his former students for making him proud. He said as principal of the school, he was inspired by theirÂ performances.

Since itsÂ founding in 2006, Gayflor said the school has produced students who consistently top public exams and perform well at universities.

â€œOne of the indicators of a good school is the performance of its students on external tests or exams,â€ he said.

In its second graduating class, the school produced four students whose scores qualified as division one â€” the highest category in the Liberia Senior High School Certificate Examination, which is administered by the West African Examinations Council, WAEC.

Between 2010 and 2014, Gayflor said the school had 96.4% of seniors successfully passing the WAEC senior high exam.

At the university level, he said graduates from Firestone opened another frontier of academic excellence beginning 2013.

He has however challenged the current senior class to make Liberia proud in the upcoming West African Secondary School Certificate Examinations. He said the school hadÂ produced two of the only three students whose performances placed them in the division three category in the trial exam last year.

He called the result of the exam a disgrace to Liberia and promised that the Firestone-Liberia Senior High School would redeem Liberian schools next year.