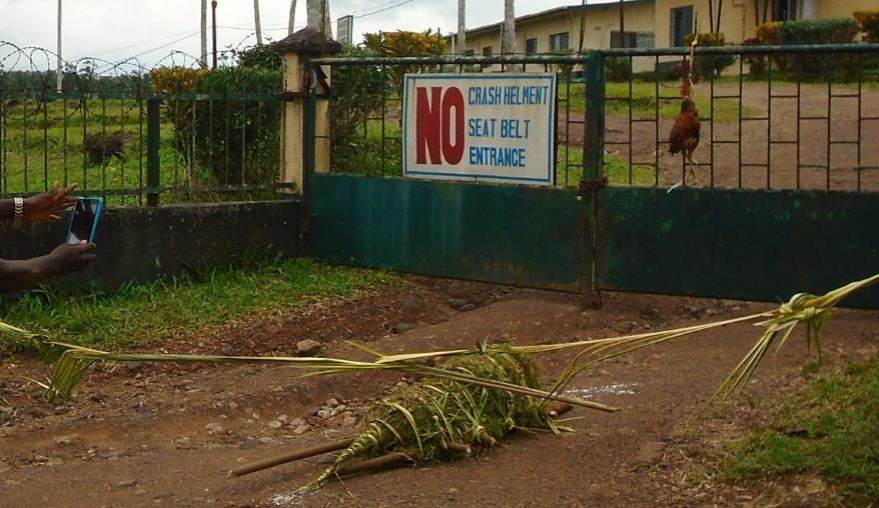 GEDETARBO, Maryland â€“ For a few days last week, the Cavalla Rubber Corporation in Pleebo, Maryland was shut down due to spells casted at the entrance of the companyâ€™s central office in Gedetarbo.

Signs of the traditional spells were visible on Monday, November 19, when employees of the company who went to work early that morning said they saw no security at the guard post and several objects planted at the companyâ€™s main entrance.

Those objects included a dead red rooster hung by its neck around the buildingâ€™s gate, palm branches tied from one end to the other of the gate, a dead frog tied with black tread, and what was believed to be a casket.

The traditional magic spell comes as some 162 redundant workers of both the Cavalla Rubber Corporation and the Maryland Oil Palm Plantation recently staged a joint demonstration demanding benefits owed to them for services rendered to both companies.

The former workers said the company was violating the labor law, which prompted them to take their case to the labor court.

After a review of the redundant workersâ€™ complaints, the then-labor commissioner, N. Jully Howe, ruled in the workersâ€™ favor and instructed both companies to pay the former employees US$903,476.20. However, the two companies have refused to live up to the courtâ€™s decision.

The former workersâ€™ recent demonstration that disrupted both companiesâ€™ operations drew the attention of Internal Affairs Minister Varney A. Sirleaf, who paid a one-day visit to Maryland to hear the complaints of the protesters, who have noted that their case has not been taken seriously by the county authority and the countyâ€™s legislative caucus.

Speaking at a town hall meeting with the redundant works in Pleebo, Sirleaf said he was visiting because he had heard about the protests. He promised the protesters that his office would respond to their concerns and asked the redundant workers to cease their demonstration, as the government was committed to ensuring the matter was fully settled.

However, a week after Sirleafâ€™s visit, Domingo Chea, who is representing the workers, told The Bush Chicken that since the minister left the county, he has not called them to address their concerns, as he promised.

Fearing that their plight was going unnoticed, some workers had collaborated with traditional leaders from River Gee and Grand Kru to cast the spells.

The acting chairman of Maryland Traditional Council, Chief Nelson Neal, said an investigation done by his group revealed that the workers were responsible for the spells. The traditional council promised to remove the items and fine the workers. The workers are now required to pay fines in cow, goat, chicken, cane juice, among other things.

Meanwhile, a member of the redundant workers who spoke to The Bush Chicken anonymously said the traditional magic was not meant to harm top officials of the company, but to scare them into paying the money owed.

â€œFor God sake, the court will not rule in our favor and the companies fail to pay the money they were instructed to pay to us, but we will do all to get that money,â€ the worker said.

Following the intervention of the county superintendent and the traditional council, the spells and their accompanying objects were removed the night of Tuesday, November 20.

Employees assigned at that facility have resumed work, although many are still fearful.