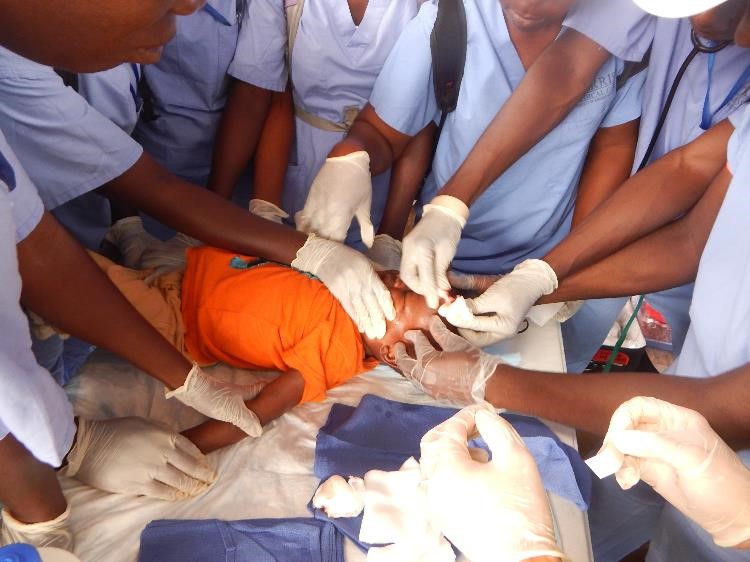 MONROVIA, Montserrado â€“ Thousands of Liberians are turning up to benefit from free medical care services, as a U.S. medical team continues its mission to the country this week.

Citizens with diverse medical needs are being catered to in several different communities in Margibi, Bong, and Montserrado, among others.

Gus Kormah, a Liberian residing in the U.S. directed the team to the country. Kormah told The Bush Chicken in an interview that the mission is an outreach initiative of his former employer, Unity Point-Pekin, formerly Pekin Hospital, in Illinois. The team comprises of 28 medical professionals with different specialties.

He said the goal of the mission is to help provide free and quality health care services to Liberians.

â€œIt started in 2013, and we were supposed to come in 2014, but because of the Ebola outbreak, we had to reschedule for now,â€ he said.

According to him, the cost of the mission to Liberia is estimated at several thousand US dollars.

â€œThe drugs alone we brought is over 200 suitcases, and some are being bought locally,â€ he said. Since the team arrived in the country last Friday, Kormah said they have been in several communities providing free primary health care services, and making donations to medical institutions.

In particular instances, he said the team is providing nutritional supplements to malnourished children, and providing clothing for children and adults with special needs.

Kormah said although the team treats up to 500 patients a day, the number is far less than the number of people turning up each day for services. However, most of those being treated are women and children. Meanwhile, Kormah is hoping to form a network of more people and organizations to make interventions in other areas to help reduce the countryâ€™s health issues.

He said his team would also donate equipment and other medical supplies to the Redemption Hospital in Monrovia as a contribution to building a more resilient health care system in Liberia.

The teamâ€™s leader, Cindy Justus, said their target is to treat at least 2,000 Liberians.

Speaking in an interview at one of the teamâ€™s outreaches around the Jamaica Road community on Thursday, Justus said five outreach clinics had been completed by the mission since it arrived last week.

â€œTomorrow, weâ€™re going to take some donations to a couple of hospitals and orphanages,â€ she disclosed.

She said among cases treated so far, skin diseases and burns, sexually transmitted infections, prenatal care needs, and old age-related symptoms have remained the most common. Cindy Justus says the greatest challenge so far has remained the missionâ€™s incapacity to treat all patients turning up each day. Photo: Gbatemah Senah

She said expressed satisfaction over her teamâ€™s work in giving hope to Liberians and creating connections for bigger networks for future partnerships.

Montserradoâ€™s 13th district representative, Saah Joseph, is the head of a partnership of institutions and individual playing host to the U.S. medical mission in the country.

Joseph praised the Ministry of Health, APM Terminals, and Montserrado Senator George Weah for lending their support to host the team.

He praised the mission and its members for their kindness to Liberians and for providing professional services for free.

He said Liberia could benefit more in the future from the network established with the medical professionals, especially in times of emergencies.

Bobby Whitfield, the former president of the Federation of Liberian Associations in Australia who is also working on the mission, said he was proud to join an initiative that restores hope to Liberians.

Whitfield said as a member of the Liberian community in Australia, he shipped a 40 feet container of medical equipment and assorted books and school materials for donation. He praised the donors and partners who contributed to the humanitarian drive.

Being satisfied with the services being provided, some beneficiaries have encouraged the team toÂ continue their mission to the country.

One of them, Gbessay Johnson, praised organizers and the U.S. medical professionals for coming to the country.

â€œI feel good about their services and how nice they talk to patients,â€ Johnson said.