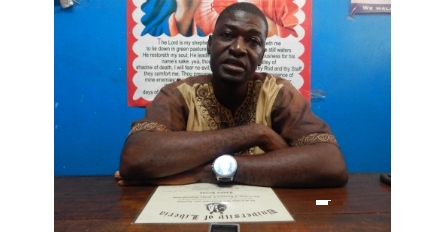 HARBEL, Margibi – Economist Jimmy KeyanÂ has described the passage of a bill to amend the countryâ€™s pension law as “untimely and inappropriate.”

Keyan, a lecturer in Economics at the University of Liberia, said that the amendment would harm the countryâ€™s economy. He said if the bill is signed into law, it would make it difficult for the government to balance its budget.

Speaking to The Bush Chicken on June 13, Keyan called upon President Ellen Johnson Sirleaf not to sign the bill into law. He said Liberia does not have a balanced economy and that revenues are low, which makes it unable to create more jobs.

In the absence of tax revenues from jobs, Keyan says the government lacks the ability to expand the capital expenditure budget that is directed to self-initiate more development projects that will improve the economy.

â€œLiberia has a high degree of inflation and low employment which makes the amendment untimely for us,â€ he said.

He said that â€œthe government should focus on improving the human resource to generate [tax revenues] that will enhance a complete capital and recurrent budget.â€

On June 10, FrontPageAfrica reported that the National Legislature has passed a bill requiring the government to pay retired lawmakers and senior government officials 50% of their departing salary as pension.

A recent report submitted by the Conference Committee to the Plenary of the House of Representatives suggested to the body that the committee set up a review of the senateâ€™s version of the pension bill. After careful deliberation, the committee concluded that the amendments made within are reasonable and realistic.

â€œWe, therefore, recommend that the bill be given full passage in concurrence with the senateâ€™s version,â€ the committee report concluded.

In 2013, the Pension and Retirement Bill was proposed to amend and restate an existing Act which was approved in 2003. The bill provides pension and retirement for the President and the Vice President, President Pro-Tempore of the Liberia Senate and other senior government officials. They include the members of the Legislature, the Supreme Court Justices and Judges of the Subordinate Courts.

Keyan is a graduate of the University of Liberia with a Masterâ€™s degree in Finance and Banking.