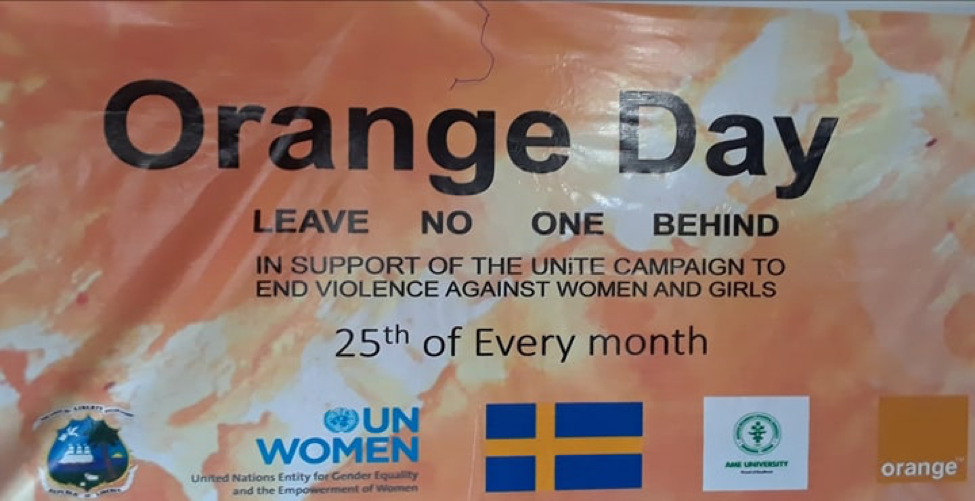 MONROVIA, Montserrado- UN Women and Orange Liberia GSM company on Thursday, October 25 collaborated to celebrate Orange day. With support from the Embassy of Sweden, the event was also held in partnership with the African Methodist Episcopal University and the Ministry of Gender, Children and Social Protection.

The United Nations Secretary Generalâ€™s Campaign â€˜UNiTE to End Violence Against Womenâ€™ launched in 2008 set aside the 25th of every month as Orange Day to raise awareness and take action to end violence against women and girls.

In observance of the day, individuals are encouraged to be attired in orange, a color that represents a future free of violence against women and girls. The day also calls upon civil society organizations, governments, and UN partners to mobilize people and highlight issues relevant to preventing and ending violence against women and girls, each year.

The official event took place at the AME University and brought together at least 350 students and faculty members of the university.

AMEU President, Joseph Isaac praised UN Women and Orange Liberia for hosting the event at the university and added his voice to the call for action to end violence against women and girls.

Isaac noted that violence against women and girls everywhere must be condemned, adding that it hampers the equal right to freedom of females.

â€œWith the adoption of the SDGs in 2015, ending violence against women is increasingly recognized as a pre-requisite for achieving all other goals,â€ Thapa disclosed to the gathering.

She described gender-based violence as a major threat to the security of women and children across the world that is perpetrated because of unequal power relationships between men and women, in society. Thapa noted that up to present, women have continued to be battered in homes, and physically and sexually abused by their partners.

At the same time, she said an estimated 246 million girls and boys experience school-related violence, globally, every year.

â€œThe extent and forms of school-related violence that girls and boys experience differ, but there is evidence that suggests that girls are at greater risks of sexual violence, harassment, and exploitation,â€ she said.

According to the UN Women Deputy Country Representative, a 2015 survey across 27 universities in the U.S. disclosed that 23 percent of female undergraduate university students reported experiencing sexual assault or sexual misconduct which came from within the campuses- from officials, teachers, and students.

She said what is even more serious is that very few cases are reported because of associated fear, stigma and discrimination, in addition to a general lack of awareness the acts are human rights violations and grave matters that need to be reported, and action is taken.

She, however, noted that more cases of violence, including rape, has been reported in the past recent in Liberia. She encouraged society to raise awareness and take actions to end all forms of violence against women and girls.

â€œNot forgetting ending abuse, harassment, and rape of girls and young women and even babies as seen during one of our joint monitoring visits to Nimba County,â€ she added.

Referring to the He4She campaign, Thapa said UN Women strongly believes in the value of working with men and boys to promote gender equality.

She said the way boys are socialized determines the way they will as young men and adults, relate to women and girls, and play their parts in ending disparity and discrimination and promoting gender equality and pride themselves as real agents of change.