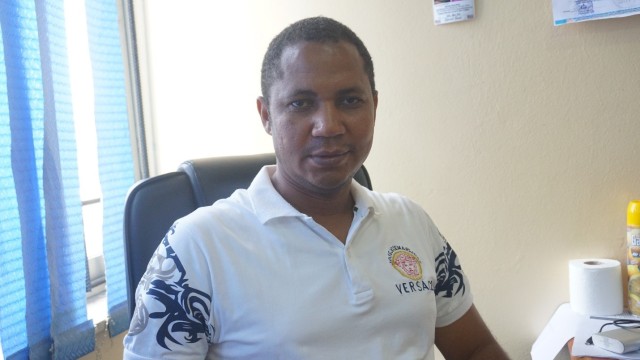 Ali says FrontPage is using sensationalism to sell the newspaper.

“These sensational headlines and writings by FPA are intended to grab the public attention and tarnish the reputation of the UP,” he noted.

Ali said it is a disservice to Unity Party for FrontPage to not verify the names of all the party’s representatives at the legislature, adding that “UP has 15 representatives, of which Waylee is not one of them.”

He said Unity Party’s office is in Congo Town and the reporter should have gone there to find out about its members.

At least three articles and editorials on the subject are still published on FrontPage’s website, containing references to Waylee being a member of Unity Party.

“The author’s intention is meant to drag the party into the mud – that one of its representatives has allegedly raped a child and impregnated her,” he said.

Ali admitted that Waylee had previously been a member of Unity Party but resigned about a year and a half ago. He termed the FrontPage reporters as lazy investigators and they did not conduct a proper investigation.

“I know FPA wants to sensationalize stories and be the first to break the news in the media but they need to conduct proper investigation before publishing this trash,” he said.

Besides accusing FrontPage of falsely portraying Waylee as a Unity Party member, Ali also cast doubts on the reporter’s account of her trip to Grand Gedeh. Ali said reporter Bettie Mbayo’s claims that she had to hide in the bushes for three hours while interviewing the victim and being alerted that the child’s mother was coming does not sound realistic.

“In the first place, where was the reporter interviewing the child?” Ali said, adding that he did not believe the story.

In his opinion, if Mbayo was interviewing the alleged rape victim as claimed, it should have been done in the presence of family members or relatives to enable them to hear exactly what the child is saying because he does not think a child would be knowledgeable enough to respond to difficult questions. According to FrontPage’s reports, the alleged rape victim is 13 years old.

“Did the FPA reporter take the alleged rape victim to a corner to force story out of her,” he asked.

He maintained that if the reporter was conducting the interview with the child in secret and saw the victim’s mother coming, the only reason for hiding is because she was manufacturing a story.

“I am calling on Rodney Sieh as [publisher] of the FPA newspaper to inform his reporters to engage into proper investigation before publishing the trash in his paper,” Ali said.

Lennart Dodoo, an editor at FrontPage, said his paper’s only motive in reporting the story is to achieve social justice.

“As a media institution, we are under obligation to fight for justice for society’s most vulnerable and that is what the report about the 13-year-old girl allegedly raped by Waylee is all about,” Dodoo said.

According to him, his newspaper does not have any negative agenda against Waylee and does not see the need to go after him.

He said the life and future of the 13-year-old girl is being put in danger and some members of the family have confided in FrontPage to report the story. The newspaper, he said, is only trying to piece together information that the government, civil society, and human rights organizations interested in the case can follow up on.

Dodoo said FrontPage has learned that the young girl has been relocated to Billabo, a town in the district that Waylee represents.

“The chief has warned residents not to disclose any information concerning the alleged rape case to strangers,” Dodoo added. As for his reporter’s recent visit to Grand Gedeh, Dodoo said he was informed that the teenager’s mother is a powerful traditional leader in Billabo – a ‘zoe.’

Dodoo said while his reporter was interviewing the alleged rape victim, the child’s mother brought out a traditional masquerade dancer, sometimes derogatorily referred to as a ‘country devil.’

While he clarified that the masked dancer was not brought out purposely to intimidate the reporter, Mbayo had to flee the scene into the bushes and waited for several hours before returning.

“Do you think it would have been safe for my reporter to remain in the presence of the zoe woman and country devil interviewing the child?” he added.

Dodoo said no story is more important than the life of a reporter.