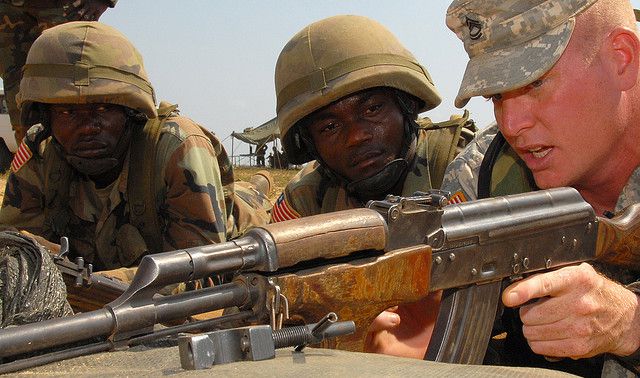 MONROVIA, Liberia â€“ Sources within the US Embassy have confirmed that the United States government has donated a large consignment of weapons, including assault rifles, to the government of Liberia. They are intended for use by the Liberian National Police (LNP) and the Armed Forces of Liberia (AFL). The donation comes with strong warnings and restrictions on their use.

The sources report that US Embassy representatives have emphasized that a few high profile police personnel should not carry or have access to the donated weapons because of their human rights record. Among the noted are the LNPâ€™s Chief of Intelligence Samuel Nimley and Deputy of Operations Abraham Kromah. During the reign of Charles Taylor, Nimely served as a leader in the notorious Anti-Terrorist Unit (ATU). Kromah, on the other hand, was a leader of the United Liberation Movement of Liberia for Democracy-Kromah (ULIMO-K) rebel group. Our sources also confirmed thatÂ the US government placed no such restrictions on AFL personnel.

The director of the LNP, Chris Massaquoi, did not confirm or deny the reports but asked for a copy of the document containingÂ the restrictions against the specified individuals. â€œIf you have the report, please share with me,â€ director Massaquoi told our reporter via text message response.

The Bush Chicken will keep you posted on developments.

Featured image courtesy of the US Army