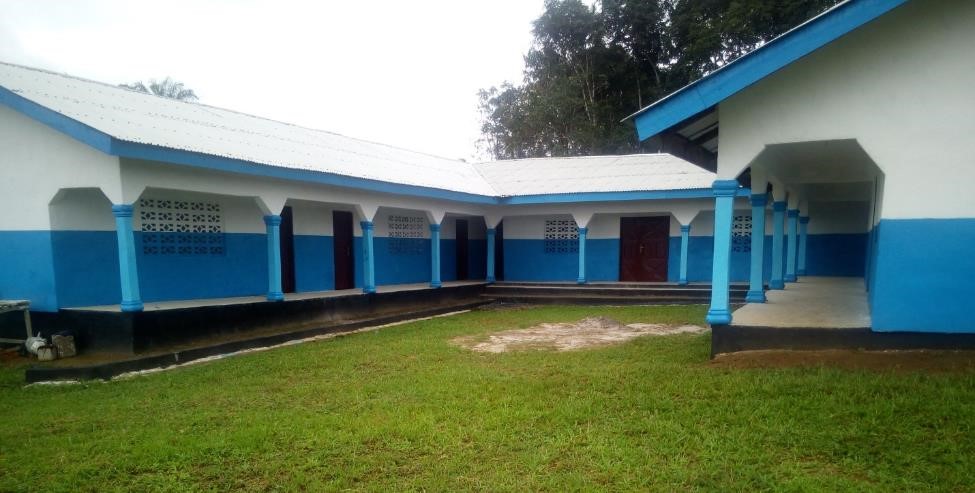 YARPAH TOWN, River CessÂ­ â€“ The Community Forestry Development Committee of Forest Management Contract Area B has completed the construction of a vocational center in River Cess, as contractors have turned over the keys to the facility.

Work began on the vocational center in October 2016, when Matthew Walley who chairs the CFDC of FMC Area B, received US$46,341 in land rental fees from EJ and J Investment Corporation, one of the logging companies operating in the county. The communities subsequently called a meeting and agreed that the money should be used to construct a vocational center in Yarpah Town.

Because the initial funds provided were not enough to complete the project, on February 24, 2018, the 12 clans that make up the affected communities of Forest Management Contract Area B converged in the Central River Cess Town of Neezwein and signed a resolution requesting US$20,000 in land rental fees from the trust board to complete the facility. Half of that amount would complete the construction while the remaining half would be used on furnishings.

The National Benefit Sharing Trust Board released US$10,000 in August to the CFDC for the completion of the center, culminating in contractors turning over the keys to the facility to Walley on October 1, 2018.

Walley has earlier told The Bush Chicken that the facility would be dedicated by October 15 this year. But he said he now expects the program to be delayed because of the poor condition of the road from Buchanan to River Cess.

â€œWe have informed all stakeholders in this for the official handover ceremony,â€ Walley said. â€œBut that will not be in October again because of the road. You know people have to come from Monrovia and other places for this program and the road is not good.â€

He did not give a specific date for the turnover but saidÂ it would happen in November “because, at that time, the road will be dried a little bit.â€

Representatives from the E.U., the National Benefit Sharing Trust Board, the central government, EJ and J, the Liberia Opportunity Industrialization Center, and the national union of Community Forestry Development Committees, are expected to attend the turnover ceremony.

The vocational center is expected to be a significant boost to the education infrastructure in River Cess. Currently, when students complete high school in the county, they are often forced to migrate to either Grand Bassa or Montserrado for vocational training or other forms of higher education.

Besides the Forum for African Women Education Technical Vocational Center in Cestos, there are no other higher education centers for young people in River Cess.

However, details about how the facility will be operated have not been provided by officials, although Walley has said he is currently negotiating with the Liberia Opportunity Industrialization Center and other technical vocational institutions.

The CFDC chairman added that the agreement between the company and the communities will also ensure that some funds are used to make trainers available at the facility, although a full operational budget for the first fiscal year has not yet been released. The vocational center will need much more than trainers.

In 2008, the Liberian government issued a long-term Forest Resources Licence known as Forest Management Contract Area B under the new 2006 Forestry Reform Law that allows a person to a tract of forest land to harvest or use forest products. The contract covered 57,262 hectares to EJ and J in River Cess.