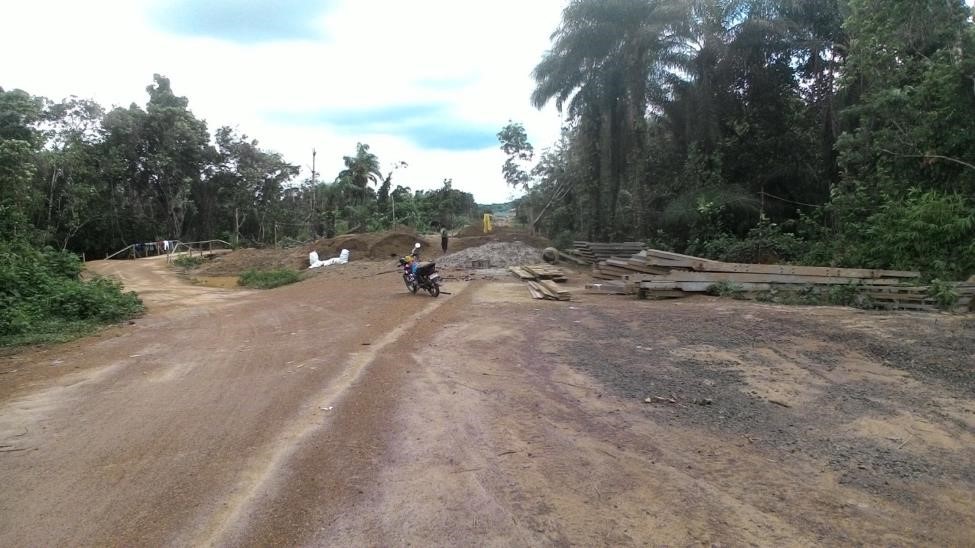 The two feeder roads under rehabilitation include a 35km road from Compound One to Edina that is worth US$1.5 million and a 7.25km road from Waka Town to Johnny Tutu Town worth US$570,000.

The Waka Town road is being implemented by the Solid Rock Construction Company while the Edina road is being constructed by the Atlantic Construction and Engineering Company. The road rehabilitation started early this year and expected to be completed in a little over one year.

The crew is almost finished clearing the roads and they are preparing to place culverts in areas where the roads intersect with waterways.

The road will be done with lighter rocks with deep gutters on both sides to allow water flow smoothly without creating pop holes on the main path. The Engineers have begun the construction of some of the bridges along the roads.

FRAMP is a four-year USAID-funded project in Grand Bassa, Bong, Lofa, and Nimba. A total of 139km of feeder roads is expected to be completed in Grand Bassa over the four-year period, including the current 42.25km stretch of roads under rehabilitation.

Early last year, the FRAMP project coordination secretariat conducted an assessment in the five districts of Grand Bassa and in that assessment, FRAMP reported to the countyâ€™s authority that Bassa has 611km feeder roads as per their assessment.

During one of those programs early this year, the deputy chief of party for FRAMP, Boniface Satu, said the project consists of a capacity building program, road maintenance, routine maintenance, and construction supervision.

â€œSo, it is very important that we engage you to tell us how you feel, tell us some of the things that we need to do and then we all can work together,â€ Satu told local chiefs at a town hall meeting in Buchanan.

He said 150 jobs have been created on 115km of the road in Nimba, Lofa and Bong adding that maintenance works including side brushing among others have been ongoing in those places. The Nyan Bridge along the road to Edina will need to be built. Photo: Sampson David

For his part, County Superintendent Levi Demmah thanked USAID for the project and called on all citizens to serve as ambassadors in maintaining the project.

â€œYour responsibility is to get back and inform the people and that information comes through sensitization, because if you fail to do that, it means we will not be running as fast as weâ€™re suppose to run because we have to buttress the efforts of USAID and the Ministry of Public Works,â€ Demmah told a gathering of chiefs at the town hall meeting early this year.

In a more recent interview with The Bush Chicken, the superintendent said he was â€œoptimistic that if the feeder roads are completed, they will boost the transaction of local businesses in the county.â€

The deplorable conditions of the roads being constructed have posed difficulties for residents, especially during the rainy season.

The paramount chief of Yoyah chiefdom, Moses Korweh, described the rehabilitation of the road to Edina as a major relief.

The city, located on the north shore of the mouth of the St. John River, is 5.6km north of Buchanan. Edina was founded as a colony of the American Colonization Society in 1832 and was also the birthplace of the 12th president of Liberia, Joseph James Cheeseman.