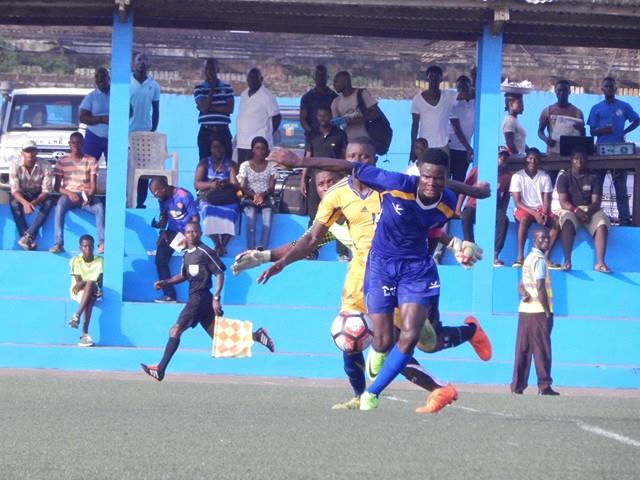 MONROVIA, Montserrado â€“ Liberiaâ€™s oldest football club, the Invincible Eleven continued its poor performance of the season in the 2017 LFA National First Division League after succumbing to a ninth consecutive defeat over the weekend.

A hat-trick from captain Van-Dave Harmon and a goal each from Yaya Bility, Mark Paye, and Prince Saydee were enough to secure all three points at home for BYC.

Fresh from qualifying to the first round of the CAF Champions League following a 7-6 penalties win over Malian side Stade de Malien, the Go Blue Boys showed class with a fine display of football throughout the match.

It took the team just 27 minutes to register its first goal through Harmon, who scored from within the six-yard box with a header from Prince Saydee’s cross, before Yaya Bility added a second within a minute of the first goal.

Harmon provided the assist for Bilityâ€™s beautifully executed goal, which occurred when he chipped the ball over IE goalkeeper Morris Jarteh. BYC was the better side in the first half against a disorganized IE who failed to create clear-cut chances in the opening 45 minutes.

However, BYC were cautious to avoid a repeat of squandering a first-half lead after previously losing to Mighty Barrolle who came from behind to win 3-2 at the Blue Field. The former returned in the second half to ensure that they capitalized on the lead and six minutes into the half, the score increased to 3-0 through Harmon who doubled his tally.

IE attempted to pull a goal back with its first shot on goal in the 58th minute through Lahai Sackie, who shot the ball wide but went an inch wide from the woodwork.

Three minutes later, Prince Saydee got on the score sheet for BYC with a left-footed shot that curled past the keeper. Saydee registered his second assist to help Harmon complete a hat-trick in the 71st minute with the odds increasing in favor of BYC.

Star striker Mark Paye who started the match off the bench was later introduced in the 76th minute for Harmon. The 2016 first division top scorer registered his name on the scoresheet four minutes after coming on with a header from Prince Kennedyâ€™s cross to add to the final score of the match.

With two games in hand, BYC moved up to third on the league table with 16 points – five behind league leaders, FC Fassell – and will go in search of another three points against Monrovia Club Breweries on Monday, March 6 before traveling to Mozambique to play the first leg of the CAF Champions league first round qualifiers, against Clube FerroviÃ¡rio da Beira.