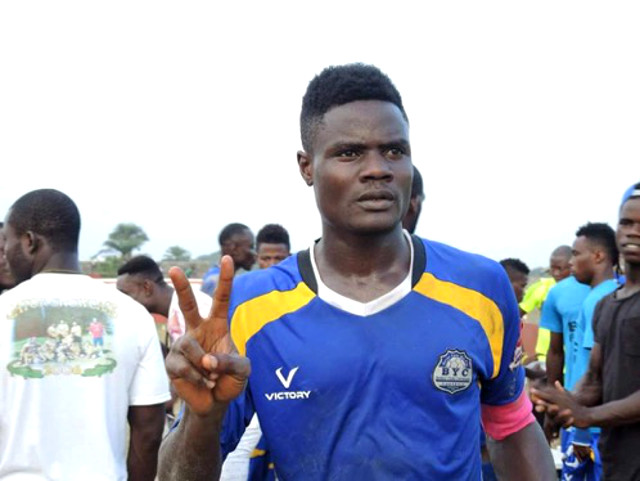 MONROVIA, Montserrado â€“ Barrack Young Controller, the defending champions of Liberiaâ€™s first division league, have put behind their poor performance in the CAF Champions League and the CAF Confederation Cup to continue their defense of the first division title with an important win.

The Go Blue Boys bounced back from their disappointing exit from the CAF competitions with a 5-0 win over point donors Invisible Eleven at the Antoinette Tubman Stadium.

A hat-trick from captain Van-Dave Harmon and a goal each from Mark Paye and Karleo Anderson were enough to humiliate Liberiaâ€™s oldest football club, IE, in a match thoroughly dominated by the Liberian champions.

The matchâ€™s first attempt on goal came in the 13th minute when BYCâ€™s Prince Saydeeâ€™s shot came off the post after a Prince Kennedy cross. A minute later, Paye got the match opener for the defending champions with a nice placement following a Claudius Morris pass.

BYCâ€™s goalkeeper Morris Tarr was forced to make a decent save after Morris Sandoâ€™s effort from outside the 18-yard box, resulting in IEâ€™s first corner kick of the match.

Van-Dave increased the score to 2-0 in the 27th minute after receiving a cross from Prince Kennedy, who was playing at the left back position. Harmon controlled the ball well in the six-yard box before shooting into IE’s net.

Five minutes after conceding the second goal of the match, IEâ€™s goalkeeper Jerimiah Sickey saved a one-on-one ball from Harmon in the 18-yard box with his legs, denying the Go Blue Boys their third goal.

With the pressure on IE, head coach Samuel Sumo brought on Kelvin Dickson for Daddy Forkpa, hoping to increase their counterattack. This substitution failed to work out as they went to the break down by two goals.

Smiles came on the faces of BYC’s fan in the 71st minute when IE’s center defender Madas Sawele held the ball with his hand in the penalty area and BYC was awarded a penalty.

Anderson, who replaced Mark Paye, converted the penalty to make the score 3-0.Â  Eight minutes after Anderson scored, Harmon got his second goal of the match with a powerful header that beat Sickey. Harmon completed his hat-trick in the 82nd minute after a rebound interception of a Karleo strike from 17 yards to end the match, 5-0.

The hat-trick against IE was Harmon’s second of the season. His previous hat-trick was also against IE.

He is tied with FC Fassellâ€™s James Wallatee as the 2016-17 LFAâ€™s top scorer. They have nine goals each.

With the game in hand, BYC moved to second on the league table with 24 points, seven behind league leaders, FC Fassell.