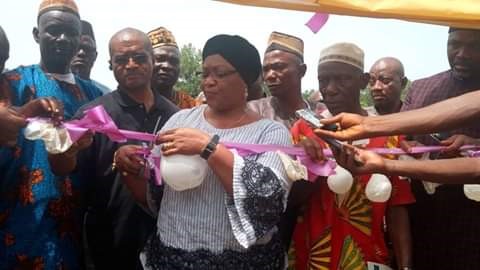 TUBMANBURG, Bomi â€“ Vice President Jewel Howard-Taylor visited Bomi this past weekend to break grounds for the Bai T. Moore Rehabilitation Village Project in the countyâ€™s capital, Tubmanburg. The project, named after the famous son of the county, a poet and literary icon, possesses incredible historical and sentimental value for the people of Tubmanburg.

Speaking at the groundbreaking ceremony, Howard-Taylor seized the occasion to emphasize the urgency for the youth to transform their minds as they prepare themselves to serve as future leaders for the betterment of their county and Liberia as a whole.

The land area for the project is being provided by the vice president, through the people of Bomi. However, an additional 50 acres of land will be needed to accommodate large-scale agricultural activities, which are envisioned under the Rehabilitation Village. Towards this end, Howard-Taylor called on members of the community for support.

â€œLet me, first of all, thank the people of Bomi County that saw it fit to give us this place, but we are asking the people of Bomi again to help us with [an] additional 50 acres of land. I want this place to be a real rehabilitation city instead of a village,â€ the vice president noted.

The groundbreaking ceremony was held under the shadows of concerns over increasing drug addiction and abuse by youth in the county. Howard-Taylor was clear in her commitment to helping fight the scourge. She offered to provide the village with a mini-bus to help address transportation concerns. It is her dream, she said, that the village will serve as a center for rehabilitation and diverse training opportunities for substance abusers in an effort to renew their lives. 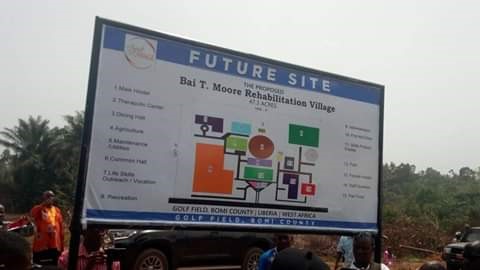 Photo of the billboard erected at the site of the project. Photo: Richard Williams

Already, many Liberians connected to the county but living in the diaspora are showing interest in supporting the initiative, she said. Howard-Taylor said she wants to tap into this immense goodwill to help provide the needed facilities for the center.

Bomiâ€™s Senator Sando Johnson also attended the ceremony, where he praised the vice president and founders of the project for their vision and foresight. Johnson pledged US$1,000 as his initial contribution and expressed his optimism â€œthat the project is a blessing for the citizens of Bomi because it will help create jobs for the youths while taking them off harmful substances, and [the] reducing crime rate in the county.â€

Speaking earlier, the chairman of the Board of Directors of Agent for Change, Samuel Reeves of the Providence Baptist Church in Monrovia, disclosed that the total cost of the project â€“ to be completed in three phases â€“ is estimated at US$3 million. The amount includes the construction of all facilities in the village.

Reeves thanked the vice president and the people of Bomi for welcoming the project. He also appealed for more support for the project from citizens of the county.

Bomiâ€™s acting youth chairman, Lahai Fahnbulleh, also attended the ceremony and promised to encourage affected members of the youth and student communities to take advantage of the center when it is completed.

â€œI personally will serve as a watchdog, meaning I will always be around, as I will as well encourage my youth to provide other voluntary services so that this project can be realized,â€ Fahnbulleh said. â€œAnyone we see illegally taking materials from this place, we will alarm.â€

When questioned regarding the reasons for their boycott, Varney, in whose city the project will be constructed, responded that he was not informed of any groundbreaking ceremony. Superintendent Robinson refused to give any reasons for his absence, promising instead to address the matter at a later time.

Speculations abound regarding the real reasons for the officialsâ€™ absence, which some believe may be related to a recent feud between the vice president and President George Weah, at whose will and pleasure the two officials serve.