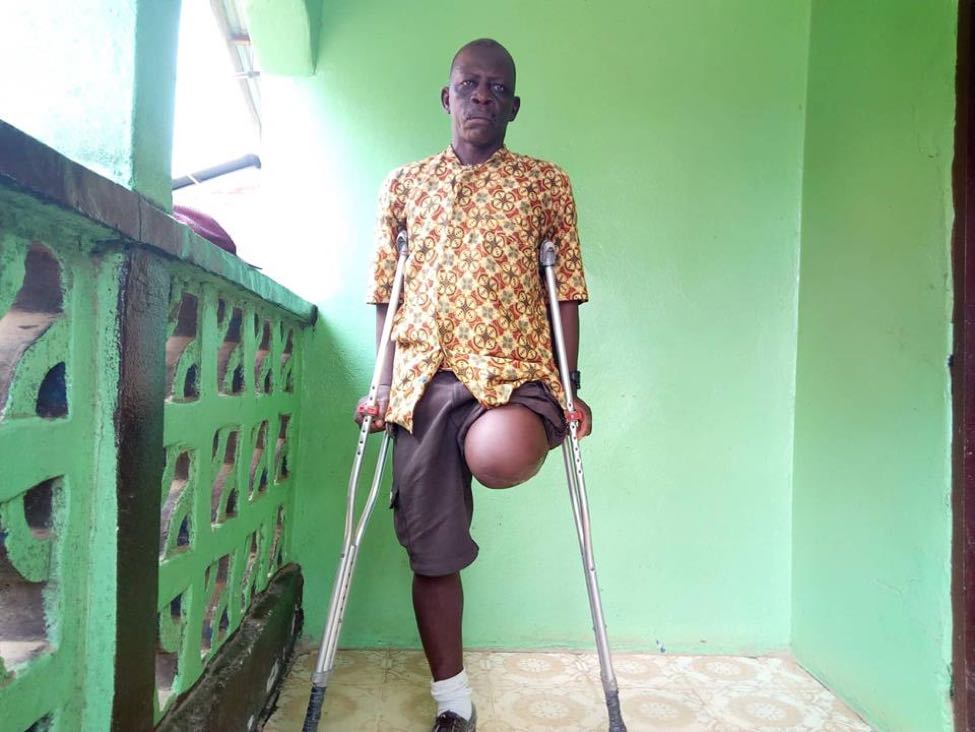 GBARNGA, Bong â€“ Even though Moses Porkpah has since been sentenced to life imprison for killing his girlfriend and wounding two others, the scabs of Porkpahâ€™s actions are still being seen and felt in the community.

Porkpah was sentenced to life in prison by the Ninth Judicial Circuit in Bong in September 2017.

After killing his girlfriend, he had fled to the forest, where he also shot two hunters, Amos Nusiah and Andrew Woah, who had gone to help the police secure his arrest.

Woah recovered speedily, but Nusiahâ€™s left leg was amputated at the Phebe Hospital because of the untreatable wounds he sustained from the bullet.

â€œI am a farmer,â€ Nusiah told The Bush Chicken in Gbarnga. â€œI used to make my garden to feed my children and send them to school. But now, look at me. I cannot do those things again with my one leg.â€

Nusiah said during the time when he and other hunters were assisting the police, they received assurance that the government would take full responsibility of their welfare in case they sustained injury while helping the government in its search for the murderer.

Meanwhile, Bongâ€™s superintendent of police, Frederick Nepay, said he â€œcanâ€™t remember any such discussions as claimed by Nusiah.â€ He said even though Nusiahâ€™s current condition is regrettable, there was no agreement reached to support injured hunters helping the police in the case.

Vice President Jewel Howard-Taylor recently made a donation of L$30,000 (US$200), a wheelchair, and three 25kg bags of rice to Nusiah in Gbarnga as an â€œinitial contribution.â€ In a brief informal chat with Nusiah in Gbarnga, the vice president who was on her way to Nimba, said she had followed Nusiahâ€™s plea on social media.

She said getting his kids in school was her â€œimmediate priority.â€

Nusiah is also seeking assistance for further medical checkups, noting that he believes there are bullets still lodged in his amputated leg.

Even though the vice presidentâ€™s â€œinitial contributionâ€ has been hailed by Porkpah and other citizens of Bong, the amount is infinitesimal to pay the fees for Nusiahâ€™s 13 children and take care of his health condition.

Some residents of Bong are calling for the governmentâ€™s intervention to help Nusiah and his family. Besides Nusiahâ€™s case, farmers in the area are complaining about the effect the saga had on their livelihood. Residents of Cow Farm are reporting shortages of food and seeds for planting their farms.

The residents say they were prevented from going to their farms for three months, for fear of encountering Porkpah, who was hiding armed in the bushes.

â€œWe were scared to go in the bush to carry out our farming activities. This resulted to our farms been destroyed,â€ said Jeremiah Laweh, the townâ€™s secretary, in a recent interview to Radio Gbarnga.

Laweh pleaded with the government, agricultural organizations, and other individuals, to help the community with food items and rice seedlings for farming.