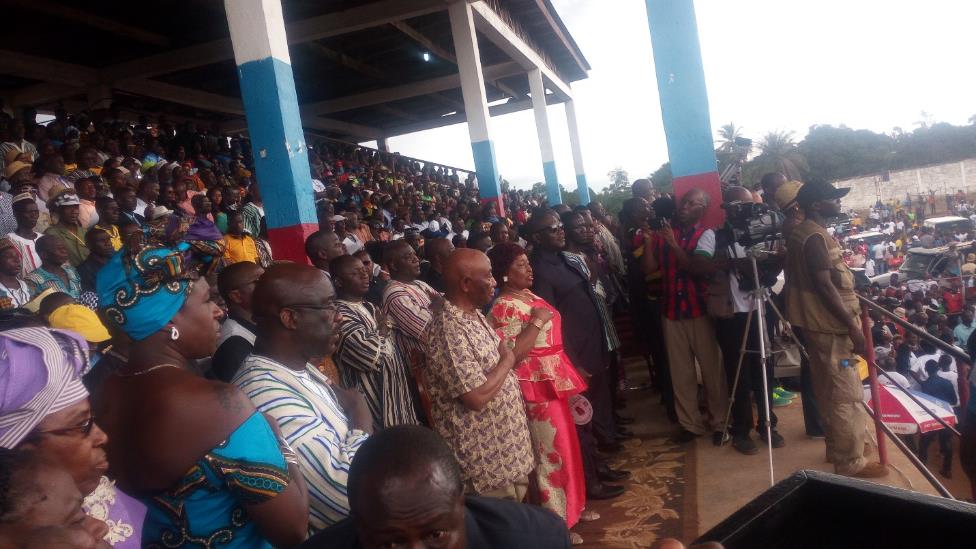 GBARNGA, Bong â€“ The stander bearer of the Unity Party, Joseph Nyumah Boakai, has received an endorsement from some citizens of Bong County to contest the coming Octoberâ€™s elections.

Boakai, who is also Liberiaâ€™s current vice president, received the endorsement on Sunday at the David Kuyon Sports Stadium in Gbarnga at a program graced by aÂ huge turnout.

The crowd included people from Bong, Lofa, Nimba, Margibi, Bassa and other counties.

Reading the endorsement on behalf of the citizens, Bongâ€™s Senator Henry W. Yallah said the endorsement was a response to an appeal elders of Boakaiâ€™s home county of Lofa made to Bong a year ago for support to Boakai in the coming elections. Yallah said the chiefs and elders of Lofa visited Bong and asked Bong citizens to support the presidential bid of their son, Joseph Nyumah Boakai.

â€œWe have invited you to ask you to join us to respond to the people of Lofa County for a request they made to us one year plus back. And we have been consulting as a county. At the end of the consultation, today will be the day for that response to the people of Lofa County. And this is the beginning of a process that will liberate our country for once,â€ Yallah said.

Yallah said the people of Bong believe that a Joseph Boakai presidency would ensure that the voices of the native people are part of the decision-making process of Liberia. Yallah said with the support of the citizens of Bong, Boakai would win the election in the first round.

In response, Boakai praised the people of Bong for the endorsement and promised to uphold the trust and confidence in him if elected Liberiaâ€™s next president.

â€œWe know that you are saying this with sincerity because this is what tradition says. When our people speak, they mean it.â€ Boakai said. â€œI stand before you this day with great depth of humanity to receive this privileged, important boost of support from reliable and well intentioned people of Bong County.â€

He described the forum and the endorsement as a â€œreaffirmation of the supportâ€ giving by the 19 senators recently in Monrovia for him. Boakai promised to live in confines with the laws governing the elections and called on all the citizens to be law abiding during the elections to ensure that the peace of the country is sustained.

Two of Bongâ€™s prominent citizens, Senator Jewel Howard Taylor and Amb. Jeremiah Sulunteh, are contesting as vice presidential candidates on the tickets of the Coalition for Democratic Change and Alternative National Congress, respectively.

Some citizens of the county have said that it is flawed for anyone to think that Boakai could win a majority of the votes in Bong with the presence of Taylor and Sulunteh in the elections, even with such endorsement.

However, with so many Bong lawmakers supporting Boakaiâ€™s bid, the odds might be in his favor. Most of the members of the Bong County Legislative Caucus have declared their support for Boakai, including Sen. Henry Yallah, Representatives Prince Moye, Tokpah Mulbah, Corpu Barclay, and Edward Karfiah.