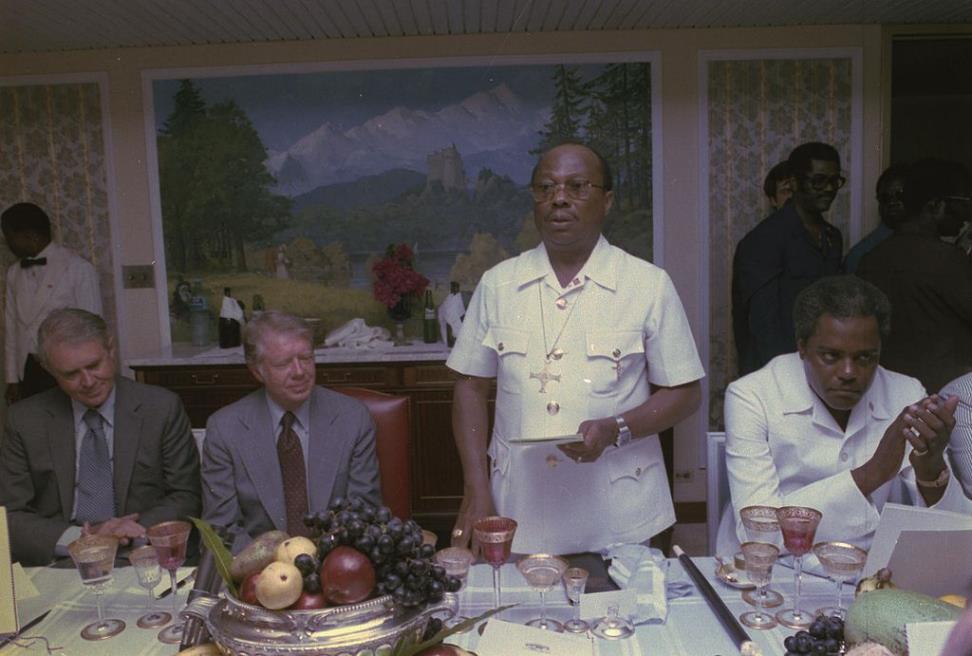 His own father had come to the country as a nine-year-old boy, his South Carolina family fleeing persecution of blacks in the aftermath of the American Civil War.

The 29 heads of state and 47 foreign ministers in attendance as President Tolbert became chair of the Organization of African Unity would have found it hard to believe that less than a year later Tolbert would be killed by his own troops, low-ranking recruits perceived as drug addicts who dressed up in war paint and methodically shot their way to the top floor of the Executive Mansion.

Since coming to office in 1971, Tolbert had been engaged in a race to reform Liberian society, where the descendants of black Americans, known as Americo-Liberians, continued to dominate political and economic life.

He shunned his predecessorâ€™s emphasis on formal dress wear, which was oppressively uncomfortable in the tropical heat. He severed relations with Israel following the 1973 Yom Kippur War and established relations with radical countries like Cuba, espousing anti-American policies.

He appointed Florence Chenoweth, a U.S.-educated agronomist barely out of her 20s, as minister of agriculture. Mary Brown Sherman became the first female president of an African University in 1978. Ellen Johnson Sirleaf, who would become Africaâ€™s first elected female president a quarter century later, was his minister of finance. To represent his office, he named D. Elwood Dunn as minister of state for presidential affairs.

Educated in France and at American University in Washington, D.C., Dunn was a political scientist with several years of experience teaching in the United States before he returned to Liberia, still several years shy of his 35th birthday.

Dunnâ€™s competence and ideological alignment with Tolbertâ€™s reform-minded ideology propelled him into the cabinet in just a few years.

Although he had ancestral ties to North Carolina and was part of the Americo-Liberian settler class, Dunn was not part of the traditional elite. He was born into a large family in Buchanan, a small port town. He quickly distinguished himself as a remarkable student, noted for his religious fervor.

Unlike the children of the elite, educated at the finest boarding schools across Europe, Dunn did not leave Liberia until the age of 20, when as a student at the University of Liberia, he participated in a church trip to Kenya.

Seventeen years later, Tolbert demonstrated his confidence in his rising protÃ©gÃ© by designating him as the national orator for Liberiaâ€™s 132nd independence celebration in 1979.

Speaking on â€˜Defining the National Purpose of Liberia,â€™ Dunn noted that Liberia, Africaâ€™s oldest republic, had used its â€œexperience of survival through a century of turbulence to serve Africa as she traverses the turbulence of decolonization and the complication of consolidating independence.â€

Referring to the domestic pressures Tolbert faced as Liberians sought greater political and social equality, Dunn cautioned that â€œonly a Liberia in the committed process of creating a genuinely wholesome functioning society at home can commend the international attention required to build a wholesome functioning Africa.â€

Thus, it was fitting that as Tolbert was slaughtered in front of his wife and grandchildren and hastily buried in an unmarked grave, Dunn was wrapping up official travel to Harare (then Salisbury) in the British colony of Rhodesia that was just days away from becoming the independent nation of Zimbabwe.

While minority rule in Liberia was coming to a bloody end, Zimbabwe was about to defy the expectations of pessimists and embrace an inclusive government.

Tolbert had displayed a keen interest in Zimbabwe since becoming chair of the OAU. He visited London during the final days of the Lancaster House Conference that guided the colony in its transition from white rule to majority rule and entertained a steady stream of correspondence with British Prime Minister Margret Thatcher.

On April 4, Dunn arrived in Harare with a message of congratulations to Prime Minister-elect Robert Mugabe and a mandate to prepare the way for his president to arrive less than two weeks later.

He met with a range of officials in the incoming government, which with its avowed Marxist orientation, caused some unease in U.S. policy circles.

He spent most of his time with Emmerson Mnangagwa, a young minister who several years later would allegedly oversee the slaughter of tens of thousands of Zimbabweans from the Ndebele ethnic minority during the Gukurahundi Massacre. As Zimbabweâ€™s current vice-president, he is poised to lead the nation when its long-serving nonagenarian leader finally steps aside.

Dunn had completed his mission and was waiting for a connecting flight to Liberia at the home of the countryâ€™s Kenyan ambassador when the U.S. Embassy in Nairobi informed them that the government had been overthrown and Tolbert was dead. Dunn then re-routed to neighboring Sierra Leone where he waited several days before receiving assurances from progressive academics aligned with the countryâ€™s new military leaders that he would not face any repercussions if he returned home to his wife and children.

Arriving home, he got all the way to the site of his old office at the Executive Mansion, surprised by the lack of traffic on the lengthy drive from the airport, before he learned that 13 leading members of the Tolbert government had been executed by firing squad that morning, ten days after the coup.

Dunn would stay in Liberia until the end of the year, teaching at the university, but the abrupt collapse of the government had shaken his confidence in Liberiaâ€™s future and he would spend the next half of his life in Tennessee, where he taught at the University of the South.

Leaving government service, Dunn has become one of Liberiaâ€™s most respected academics, writing widely on Liberiaâ€™s relationship with the United States. His extensive research has led him to conclude that he is â€œpersonally convinced beyond a shadow of a doubt that official Washington wanted Tolbert out.â€

He notes that the relationship between the countries was at a historic low and that shortly before Tolbert died, a bi-national commission that would examine the state of U.S.-Liberian relations was announced.

While Dunn doesnâ€™t believe that U.S. President Jimmy Carter would have personally sanctioned Tolbertâ€™s assassination, he did have the opportunity to ask Carter how he learned about the coup and says that his response did nothing to allay suspicions: â€œhe deflected it [my query] by saying â€˜it was reported to me as a tragedyâ€™ and he said nothing more.â€

Dunn notes that many of the relevant U.S. government papers of the period remain classified, but his best surmise is that Liberiaâ€™s neglectful step-father â€œfound a covert way of doing this [removing Tolbert] and proceeded to do so.â€