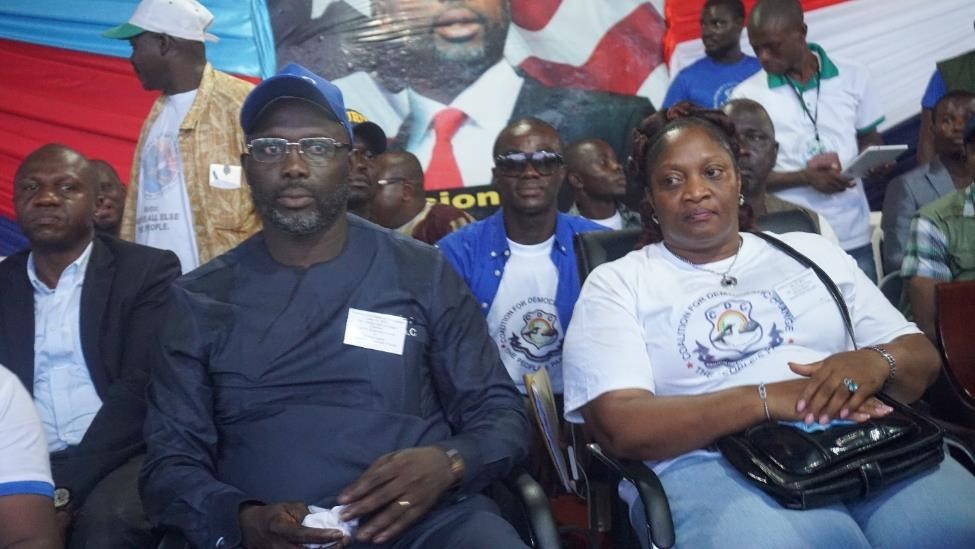 MONROVIA, Montserrado â€“ The standard bearer for the Coalition for Democratic Change, Sen. George Weah, has separated himself from statements made by his running mate Jewel Howard Taylor that their government would pursue the agenda of jailed former Liberian President Charles G. Taylor if elected.

The CDC vice standard bearer had issued a rallying cry to supporters in which she suggested that former President Taylorâ€™s agenda would be implemented if CDC wins the 2017 presidential election.

Sen. Taylor, addressing reporters in Saclepea, Nimba during the October 2017 campaign period, said although her ex-husband is not involved in Liberian politics, she believes that the National Patriotic Party he created is a grassroots party that made promises to its citizens since 1997.

â€œBecause of what happened in our government and the abrupt closure and arrest of former President Taylor, we were not able to fulfill those promises,â€ she explained.

She called on NPP partisans to come on board and help CDC win the 2017 presidential election toÂ put that agenda back on the table.

â€œWeâ€™ve done a lot of work under the NPP and CDC and even the Liberia People Democratic Party that is a fairly new has done some work here. The NPP is back in full force and because of our unity you will see them moving across from place to place,â€ Taylor said.Â The three opposition parties (the National Patriotic Party, the Congress for Democratic Change, and the Liberia People Democratic Party) formed a coalition, the Coalition for Democratic Change, to contest the 2017 elections.

Taylor also recently spoke on the Truth Breakfast Show where she said the NPP agenda had been merged with that of CDC.

But, Weah, addressing his supporters Wednesday at a press conference at the partyâ€™s headquarters on Tubman Boulevard upon his arrival from Nigeria, emphasized that the CDC agenda is different from that of the former president.

â€œThe CDC agenda is not an NPP agenda,â€ Weah said.Â According to him, the CDC vision for Liberia is an inclusive form of government.

â€œEvery citizen will have equal access to opportunities and resources, including the poor and marginalized,â€ he said.

But Josiah Marvin Cole, an official of the CDC in Bong, declared during the partyâ€™s launch in Gbarnga that Sen. Taylor is an embodiment of former president Taylor on the CDC ticket.

â€œLet me borrow the words from our former president that â€˜God willing, I will be backâ€™ and Sen. Taylor represents her former husband on the CDC ticket,â€ Cole had said.

In 2014, the former first lady had used her husbandâ€™s influence to her benefit during the senatorial election when an audio recording purported to be the voice of the former president urged residents of the Bong to throw their weight behind Jewel because she would ensure his release from prison.

â€œI am Charles Ghankay Taylor, your former president speaking to you from The Hague. If you still love me, please vote for my former wife Jewel because when she is reelected, she would ensure I am released from prison,â€ the voice in the recording said.

The recording was said to mark a turning point in the 2014 senatorial elections and propelled the incumbent senator to a second term in the Senate.

While Sen. Taylor did not clarify which part of her husbandâ€™s agenda would be implemented, under NPP rule, Liberia essentially became a police state where basic freedoms were limited, including the freedom of speech.

Weah has sought to allay such fears, which have been partly intensified by Unity Party supporters, that the country will return to a dictatorship. Moreover, he has sought to assure Liberians who may fear that international partners watching may be fearful of a plan to bring Charles Taylorâ€™s agenda back to the country.

â€œI have met with all our international partners and regional leaders and assured them that our government will play by the rules and seek the interest of the Liberian people who have suffered for so long. I want all Liberians to know that international partners are prepared to work with whoever the people choose to be their leader,â€ Weah said.

â€œI want you to know that the case with Charles Taylor is already settled in international court and we fully respect that decision, and there is no way he can run Liberia from there.â€