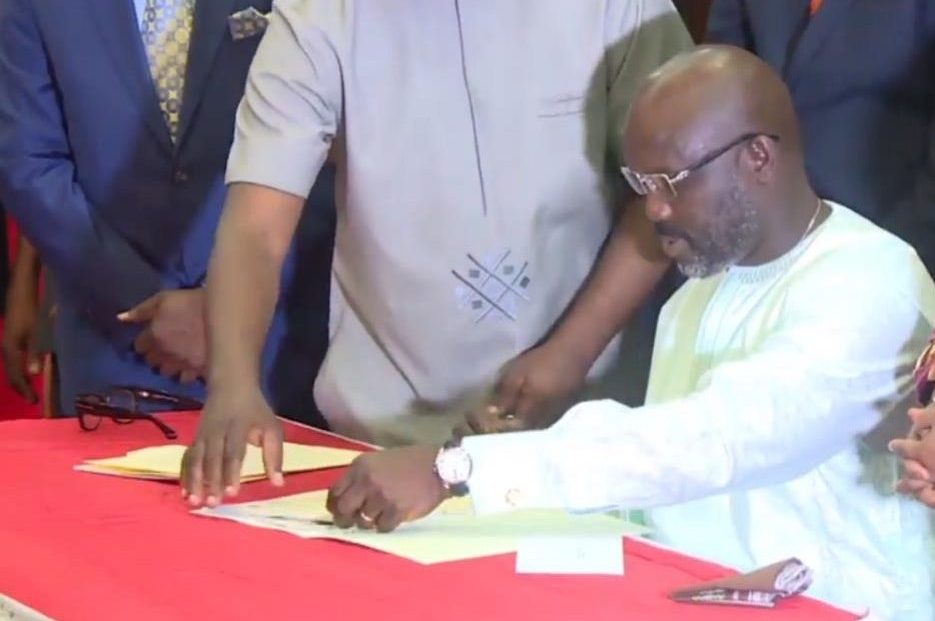 MONROVIA, Montserrado â€“ President George Manneh Weah has issued an executive order that aims to reverse the current negative state of the economy.

The executive order extends the valid period of work permits to five years. It also allows residency permits to now last as long as five years.

The order further declares that the commissioner general of the Liberia Revenue Authority, in consultation with the Finance and Development Planning Minister, can establish conditions for waivers from real estate tax penalties and customs duties.

â€œFailure on the part of the taxpayer to take advantage of a waiver offered during an annual period, the order further states, shall preclude the taxpayer from taking advantage of future annual waivers for a period of five years, during which period the taxpayer is to be subject to sanctions, including the seizure and forfeiture of assets,â€ it also added.

The order also exempts all commercial importers of goods from seeking import permits, which had been administered by the Ministry of Commerce and Industry. Â They would, however, still need to notify the ministry of their intent to import.

The presidentâ€™s executive order also authorized the finance minister to impose a surtax on goods imported into the country that are in competition with local manufacturers and producers.

Moreover, the executive order reduced the tax on air travel from 10 percent to 7 percent on travel originating from within Liberia.

Recently, a delegation of the International Monetary Fund conducted an assessment visit to Liberia and later called for the need for strong policies to stabilize the countryâ€™s economy.

The report noted that the exchange rate had depreciated by 26 percent over the year, resulting in 28 percent inflation by December 2018.

This is not the first time the George Weah-led administration has announced steps to stimulate growth in the countryâ€™s declining economy. In mid-2018, the president approved a new schedule to reduce tariffs on some basic imported commodities in the country. The presidentâ€™s office then blamed the hike in basic commodity prices on the tariff regime maintained by the previous government. The president believed that the situation was adversely affecting the poor and worked against his Pro-Poor Agenda.

Another action taken by the president was the move to mandate the Technical Economic Management Team and the Central Bank of Liberia to use US$25 million to purchase excess Liberian banknotes to stabilize the U.S.-Liberian dollar exchange rate.

However, a recent investigation by the government into the use of the fund created skepticism over the impact of the exercise. The investigation established that the teams set up to carry out the exercise had no standard criteria for determining legitimate businesses, such as through licenses and legal registrations. The report said the process also created room for illicit exchange or money laundering.