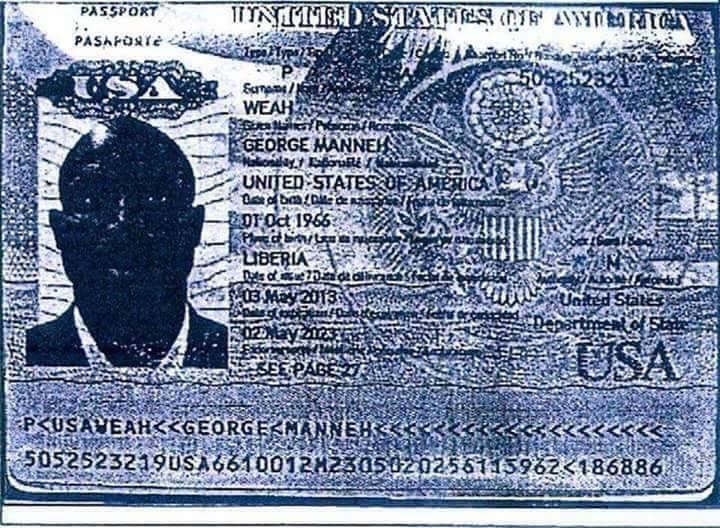 The National Movement to Support Boakai, a group campaigning for the presidential bid of Vice President Joseph Boakai, said it had discovered the passport.

Addressing a group of journalists Monday at its national headquarter, NAMBO Secretary General Robert Kpadeh said the passport in question was valid. He said the passport was issued by the U.S. State Department.

He added that for Weah to hold an American passport after contesting and failing twice for the Liberian presidency is a callous show of dishonesty and disloyalty.

He said up to the discovery of the passport, it was unthinkable that the man who claims to love Liberia would demonstrate divided allegiance and disloyalty to the state.

â€œThe Boakai movement described the action of George Weah as an unpatriotic attempt to steal the votes of the people,â€ the statement read.

NAMBO is meanwhile calling on Weah to resign as senator of Montserrado on grounds that he lied under oath to defend and protect the Constitution. It threatened to institute legal actions to have him impeached if he does not adhere to their call.

Kpadeh said a team of lawyers led by former Justice Minister Benedict Sannoh would lead the legal argument at the Supreme Court.

Currently, he said the matter is being placed before the Liberian Senate and National Elections Commission for necessary actions.

He argued that a valid American passport carries nine digits as its number, but said the purported passport being displayed by Kpadeh and his group contains 10 digits, thus making it invalid.

â€œRobert Kpadeh and his group can go with their matter to the Supreme Court. They can even go to The Hague,â€ he disclosed.

However, Wolokollie may not have looked in the proper place as the image of the passport presented does have nine digits in the upper right-hand corner, where the passport number is usually found.

Rep. Gray, who is also an executive member of the CDC, described the allegation against the partyâ€™s standard bearer as a calculated ploy to erase the momentum of support displayed by supporters of the party on Saturday when it officially launched its campaign.

â€œItâ€™s a concocted story; itâ€™s fallacious and has no iota of truth,â€ he maintained. He said the display of the â€œfakeâ€ passport by NAMBO is dubious and criminal in nature.

When contacted for clarification, Paul Hinshaw, public officer of the U.S. Embassy in Monrovia told The Bush Chicken that American laws do not permit the embassy to disclose information concerning an individualâ€™s citizenship without his or her permission.

However, information on the official website of the U.S. Depart of Homeland Security, provides that â€œU.S. Passport numbers must be between six and nine alphanumeric characters (letters and numbers),â€ leaving the possibility that the passport could be legitimate.