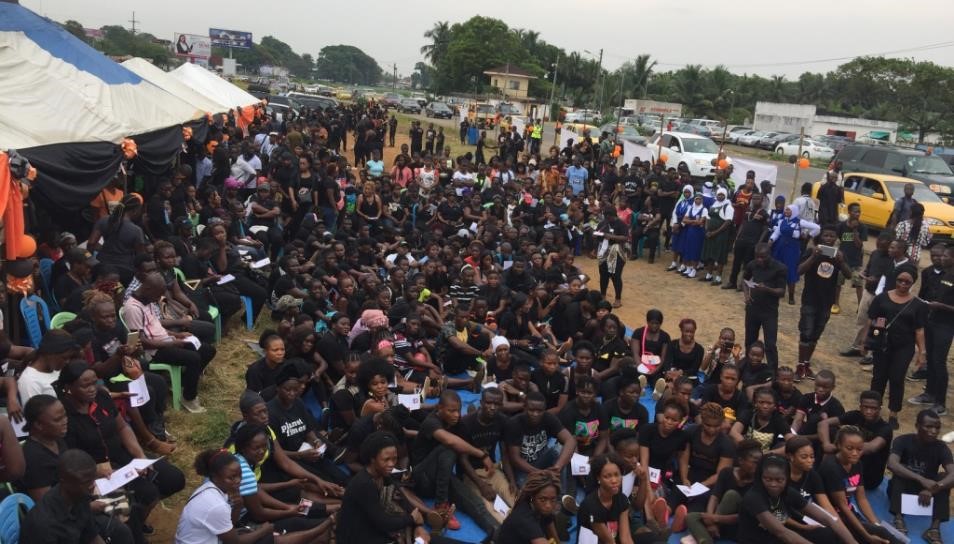 MONROVIA, Montserrado â€“ Members of a movement against sexual and gender-based violence held a one-day sit-in on Monday to demand an end to injustice and all forms of violence against women and girls.

Styled #WeAreUnprotected, the campaign arose as a response to a damning report ProPublica and TIME Magazine released on October 11 revealing sexual abuse of underage girls and widespread negligence by an educational charity operating in Liberia, More Than Me. The campaign comprises of women and feminist organizations, in addition to youth and human rights organizations, who gathered at Fish Market in Congo Town for the sit-in.

Caroline Bowah-Brown, a member of the Liberia Feminist Forumâ€™s technical working group who was part of the campaign, said violence against women and girls has become prevalent and normal in Liberia despite the many declarations against sexual and gender-based violence.

According to the Ministry of Gender, Children, and Social Protection, 1,484 SGBV cases have been reported so far this year â€“ 592 cases more than what was reported in 2017. According to the ministry, 971 of the cases were rapes, including 877 of the cases perpetrated against underage girls. It says sexual violence also accounted for nearly 70 percent of cases reported last year.

Bowah-Brown said the statistics reveal that rape remains among the most commonly reported crimes in Liberia.

â€œThere is no age limit in the act of rape in Liberia,â€ she said. â€œBabies as young as five and six months are being raped.â€ Bowah-Brown said although rape is a serious issue that needs to be tackled, stigma, discrimination an ineffective judicial system frustrate victims can discourage them from reporting. She also noted that poor health facilities to provide care for victims, a weak justice system, and low capacity of the police to arrest perpetrators in a timely manner remain major hindrances.

â€œAs the result of these, many women and girls have died while others continue to live with the emotional scars,â€ she added.

She added that violence against women and girls can lead to several conditions because of the shame and guilt: anxiousness and phobia, restlessness, post-traumatic stress syndrome, and social withdrawal.

â€œSome adverse effects of sexual violence result in consequences like teenage pregnancy which restricts the victim’s access to education, for example, leading to drop out. This would further affect opportunity for women and their contribution to national development. The cycle of violence is a continuum of the denial of rights, dignity, and humanity of women.â€

Bowah-Brown called for actions against SGBV and reminded the government of the numerous rape cases that have not yet been adjudicated in court.

She referenced the case of Nowai Flomo, a market woman who was Â allegedly murdered in 1998, the murder case of the late Angel Togba, the 12 women who were publicly humiliated in 2013 and accused of witchcraft, the former EQUIP country director who allegedly raped a 13-year-old child and was released on medical bail, and the case of another 13-year-old who was allegedly raped last year by a member of the 53rd National Legislature and Grand Gedehâ€™s second district representative, Morias Waylee.

Another member of the campaign, Yah Parwon, said the campaign was intended to send a signal to the government that the women of Liberia were tired of witnessing violations of their rights and they needed protection.

Parwon who is also the advocacy officer for Medica Liberia called on the government to act by improving current legislations and passing new ones to promote a free society for all, regardless of sex and gender.

â€œIt is a call to action to our government to tell [them] that we are tired and we need to be protected at workplaces, school grounds, marketplaces, and in the streets,â€ she said.

A resident of Central Monrovia, Rose Saah, also joined the protest to call on the government to help enforce the protection of women and their children, especially against rape. Suah said the future of too many underage girls were threatened by the menace of rape.

The campaign also drew the attention of the youth, including the 2015 International Childrenâ€™s Peace Prize winner Abraham Keita, who registered his disappointed in the governmentâ€™s failure to protect women and children against violence.

Keita welcomes the campaign, adding that the current administration has continued to politicize the fight against gender-based violence.

â€œWhenever I see or hear a child being raped, it hurts, and I fear that if this continues to happen, every woman and girl will be a victim,â€ he said.

The sit-in is part of the 16 Days of Activism, an international campaign to raise awareness about violence against women and girls. The campaign runs every year from November 25, the International Day for Elimination of Violence against Women, to December 10, Human Rights Day.

President George Weah also held a national launch of the campaign on Monday at the Antoinette Tubman Stadium. It was organized by the Ministry of Gender, Children, and Social Protection in collaboration with the office of the first lady, the National Gender-based Violence Taskforce, and other partners.

At the program, Grand Kruâ€™s Senator Peter Coleman, who also chairs the Senate Committee on Health, Gender, Children and Social Protection, promised to work along with his colleagues in the legislature and the president to ensure the passage of the Domestic Violence Act.

â€œThe domestic violence law will be passed by the House and we will ensure that the rape law is strengthened in order to save the lives of our women and girls in the country that are being raped and experiencing sexual gender-based violence on a daily basis,â€ he said.

Weah also promised that his government would take similar actions to ensure the passage of the Domestic Violence Act into law and strengthen the current rape law.

â€œAll forms of gender-based violence against women are unacceptable and we must act now to save our women and girls,â€ he said.

The president, however, is known for making promises toward supporting issues of concern for womenâ€™s rights activists. He has generally failed to fulfill those promises. During the opening of the International SHEROES Forum hosted by Liberia in October, he declared himself as the countryâ€™s â€œfeminist-in-chief,â€ reaffirming the governmentâ€™s unwavering commitment to the pursuit of the feministic ideals that guarantee the rights and well-being of women. However, Weah has only appointed women to 15.8 percent of posts in his cabinet, while his counterparts in Ethiopia and Rwanda have both placed women in half of their cabinet positions.