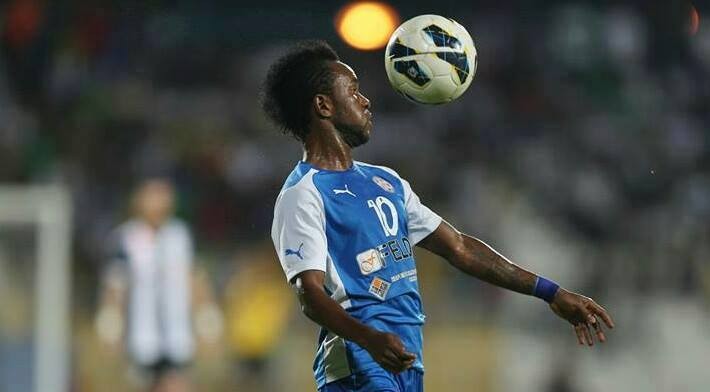 Club football resumed across the world after the international football break and some Liberians playing away had a joyous weekend while manyÂ experienced losses.

Fresh from helping Liberiaâ€™s Lone Star to a 1-0 victory over Tunisia, right foot back Solomon Grimes was again instrumental as he helped his Cypriot division one club Nea Salamis to 3-1 victory away from home. The victory was the first for Nea Salamis into the new season after having lost their previous two matches. Nea Salamis now moves up to 8th place with just three points.

In Malaysia, the first round of the 2015 Malaysia Cup was an exciting opener for Liberian international striker Patrick Ronaldinho Wleh, defender Patrick Nyemah Gedhardt, and midfielder Zah Krangar, who all had reasons to smile after their games on Saturday.

Midfield maestro Krangar conducted things in the center of the pitch as Felda United were able to pick up a 3-0 victory at Temerloh Mini Stadium. Krangar, who is known for his killer passes, assisted in two of Feldaâ€™s goals. The Zambian-born Australian Ndumba Makecheâ€™s two goals were enough to add onto Malaysian forward Indra Putra Mahayuddin’s lone goal to wrap things up for Felda. The victory moves Felda into second place in Group C, level on points and goals with Kelantan, which also won 3-0.

Just from contributing to the Lone Starâ€™s victory over Tunisia, hardworking defender Patrick Nyemah Gedhardt was again on the winning side as Sarawak got an emphatic 1-0 win over ATM. Malaysia international striker Joseph Kalang lone goal was enough to take Sarawak second place in Group B with three points.

Elsewhere, towering striker Patrick Ronaldinho Wleh failed to register his name on the scoresheet but his two assists saw the Red Ants take all three points away at Pulau Pinang. The victory means PKNS FC now sits on top of Group D with three points, tied in points with second placeÂ Pahang, which scored fewer goals.

South African-based Anthony Snoti Laffor, who was ruled out due to a calf injury, had to watch his beloved Mamelodi Sundowns suffer a painful 2-1 defeat away at Golden Arrow. The Sundownsâ€™ poor start in the new season has seen them drop nine places with just four points.

In Albania, things started sour for Abel Gebor, who was on the losing side after his club TÃ«rbuni bowed in a 2-0 home defeat at the hands of visitors Skenderb. The defeat pulled TÃ«rbuni down to sixth place, with just three points.

Liberian duo Teah Dennis and Marcus Macauley of Al Ahli had a bitter weekend in Jordan after going down 1-0 to Al Faisa at home in their opening match of the new season. Al Ahli, which has no points, sank straightly to tenth place.

In Turkey, William Jebor failed to make Ponferradina’s 18 man squad, and he watched his side suffer their second defeat of the season after losing 1-0 against league leaders Alcoron. The defeat brought Ponferradina to eighth place with six points. Elsewhere in Turkey, powerful winger Tonia Tisdell remained on the sideline due to his calf injury. The young Liberian forward could do nothing for his club Osmanlispor as they got their first defeat of the new league season, losing 2-1 at home to Konyaspor. The loss means Osmanlispor dropped to 10th place with five points.