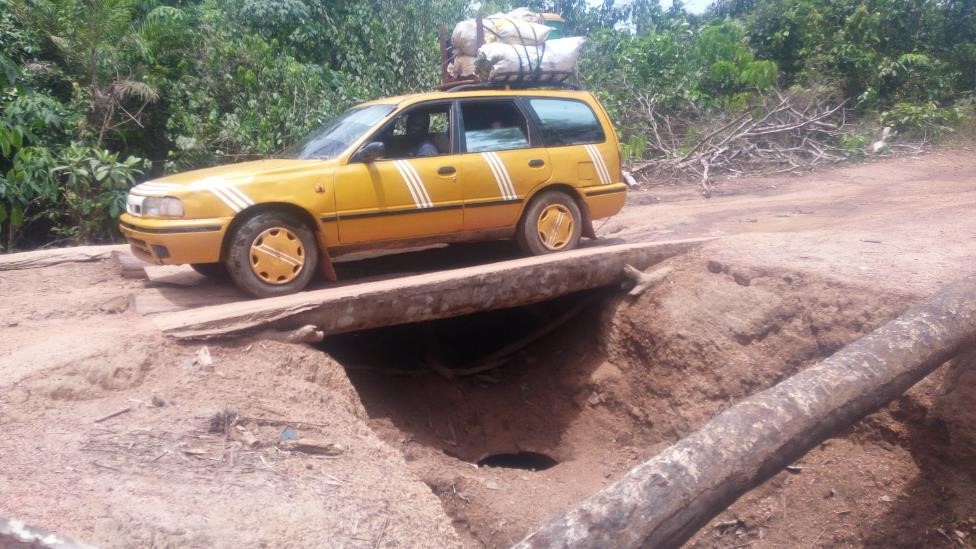 GBARNGA, Bong â€“ Every day the residents here in Kpaii District bump up and down the potholes that plague this road between Palala and Zowienta. Motorists and passengers find it extremely challenging, especially during the rainy season. Vehicles are stuck in the mud and locally produced commodities are damaged en route to markets.

This road is one of several development projects that have been delayed in Bong as a result of an apparent lack of funds in the countyâ€™s account. Also on the agenda are the completion of construction works at Bong County Technical College, the ongoing pavement of streets in Gbarnga, and several other projects.

The frustration here for local officials is that there should be money for this. Bong is one of three counties along with Nimba and Grand Bassa that share in US$3 million annually from Arcelor Mittal, the international steelmaking giant that is mining iron ore in Nimba. The company uses the refurbished railroad built by the defunct Liberian-American-Swedish Mining Company, to bypass this road and transport iron ore through Bong to the port of Buchanan.

ArcelorMittal is committed to paying US$3m to the Social Development Funds of the three countries in which it operates in the renegotiated Mineral Development Agreement, signed with President Ellen Johnson Sirleaf in 2006.

ArcelorMittal says it has paid its contribution to the Ministry of Finance and Development Planning every year as required. The last payment, it says, was made in December 2016.

But here in Bong, officials say they have not seen a dime for two years.

Company Says Itâ€™s Paying Funds; County Says It Is Not

There is much that is unclear in this story, but one thing all sides agree on is that until the 2014/2015 fiscal year, ArcelorMittal paid its dues. The road was reconditioned, the Superintendentâ€™s Compound in Gbarnga was rehabilitated, the David Kuyon Sports Stadium was rehabilitated and fenced, and the Madam Suakoko Scholarship Program was running for Bongâ€™s students attending various universities in Liberia was funded.

But in 2014, global iron ore prices began to slide. They went from near US$200 a ton to as low as US$38. At that level, ArcelorMittal claimed the company was no longer making money in Liberia. The company warned the government that without big cutbacks in their costs, the company would have to shut down. As the Ebola crisis struck and the drop in the prices of oil, rubber, and other commodities hurt the Liberian economy, the government was desperate not to lose the company and the jobs and taxes it provided.

ArcelorMittal and the government agreed to a deferment plan where the company would pay half the funds now and the rest would be paid when and if iron ore prices recovered.

In her 2016 State of the Nation address to the National Legislature, President Sirleaf made the case for the deferment plan.

â€œIn wake of the challenges we face and the need to maintain macroeconomic stability and stimulate growth, we have formulated an Economic Stimulus Package covering a range of fiscal incentives and interventions including certain deferrals in the Concession Sector,â€ she said. â€œDeferred payment of Social Development Funds for Concessions within Mining Sector under an agreement that ensures additional incentives for a strategy that prevents closure, protects employment and encourages value addition.â€

ArcelorMittal paid US$3 million to the Ministry of Finance and Development Planning for onward disbursement to Bong, Nimba and Grand Bassa every year until 2015, according to Hesta Baker-Pearson, the companyâ€™s head of corporate communications. Nimba, the host of the concession, receives US$1.5 million of the total amount. Grand Bassa hosts the port where the iron ore is transported, and so it receives US$1 million while Bong, hosting the railroad used to transport the ore to Buchanan, gets US$500,000.

In 2016, the company took advantage of the government deal and paid US$1.5 million for the three counties, deferring the other US$1.5 million to a later date.

Baker-Pearson was angered at claims the company had not paid.

â€œWe have not stopped paying the County Social Development Funds,â€ she said. Up to December of 2016, ArcelorMittal has paid US$32.5 million of the total $75m it had committed to pay to the three counties under its 25-year license, according to Baker-Pearson.

â€œIn terms of the payments, ArcelorMittal has been very vigilant in making sure that those payments are made on time, and they are paid annually,â€ Baker-Pearson said.

She said it was unfortunate that the information has not gone out to everybody concerning the payments the company has made. Baker-Pearson noted that she hopes that the government, as well as ArcelorMittal, can communicate the information to citizens. But Bongâ€™s county officials insist that is not the story they are hearing from the Ministry of Finance.

The countyâ€™s superintendent, Selena Polson Mappy, told The Bush Chicken the last payment ArcelorMittal made to the Ministry of Finance for Bong was in the 2014/2015 fiscal year. Mappy said she and other officials have continuously informed citizens in the county that the company had stopped paying the funds due to the global drop in the price of iron ore.

Mappy said that the failure of companies operating in Bong, including ArcelorMittal, to pay their social contributions, is creating a serious impediment for development projects in the county.

â€œA lot of the projects are stalled. We implement development projects based on the allotment we get from the Ministry of Finance. Most of our projects we started are at 85 percent â€“ some are finished but we are indebted to the contractors,â€ said Mappy.

She said the Ministry of Finance has always made regular payments of funds it received from ArcelorMittal and other companies on behalf of Bong and so she does not believe that the company has made any payment to the government for the county. Representative George Mulbah, chair of the Bong County Legislative Caucus, concurs with the countyâ€™s superintendent that they have not received any payments from the company since the 2014/2015 fiscal year.

Representative Mulbah said the Ministry of Finance and Development Planning has continuously informed them that ArcelorMittal has made no payments in the last two years.

â€œIt could be that ArcelorMittal is paying the money, we canâ€™t deny that. But the excuse government has been giving us is that the money is not forthcoming. This is why we want to exert all efforts to establish what is obtaining as leaders of the county,â€ Mulbah said.

He promised, however, that the Legislative Caucus was once more â€œlaunching a checkâ€ with the Finance Ministry to establish whether ArcelorMittal has paid the funds as it is claiming.

Nimba has received its funds. Superintendent Dorr Cooper confirmed that Nimba received the full $1.5m allotted for Nimba in 2015 and half of that in 2016 in reporting by Joaquin Sendolo, a New Narratives fellow at Daily Observer.

Finance Ministry Does Not Respond to Requests for Answers.

The key missing player in this story is the Ministry of Finance and Development Planning. ArcelorMittal says it paid the money to the Ministry. The county officials say they have not received it.

The Bush Chicken would like to answer those questions but Ministry spokesperson, Bernard A. Waritay, did not respond to repeated requests for comment in time for publication of this story.

This story was produced in collaboration with New Narratives and the Thomson Reuters Foundation with funding from German Development Cooperation. The funder had no say in its content.