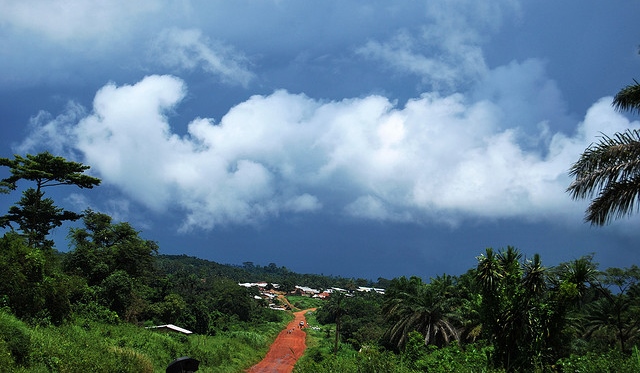 ZORZOR, Lofa County – There was unrest in Zorzor on Wednesday as angry youth burned down businesses and homes owned by residents from the Mandingo ethnic group in retaliation for the murder of a pregnant woman.

Eyewitnesses say the young woman came to visit from Fissibu, a nearby town. She was said to have arrived at around 11 a.m. and was discovered to be dead at approximately noon. By 7 p.m., the crowd had already started burning some shops and other buildings owned by Mandingos. The mostly young crowd also erected roadblocks along the main street to prevent the alleged criminal from leaving town.

The youth alleged that a Mandingo man, only identified as AB, murdered the young woman in circumstances that are still unknown. They say that when the victim arrived in town, they saw her riding with him on his motorcycle. She was said to have come to Zorzor for her child support payment from the alleged perpetrator. Since the murder, AB has not been seen and may have likely escaped from Zorzor.

The victim’s family confirmed that she was six months pregnant but declined to release her name. Sources at the Curran Lutheran Hospital also confirmed to The Bush Chicken that the victim’s body had been taken to the morgue there.

Officials have not made any public statements and the local radio station, Radio Life, has been shut down. The radio station is located on the road to Fissibu, and its management chose to close because a roadblock erected along that road was manned by angry youth.

Speaking to The Bush Chicken on the phone, both Sen. George Tengbeh and Rep. Moses Kollie confirmed that Police Support Units from the Liberian National Police had been called to bring the town back to order.

The PSUs were traveling from Voinjama and Gbarnga, which are 94 and 104 kilometers away from Zorzor, respectively. The lawmakers say police in Zorzor are overmatched for the unrest.

The alleged culprit has been described as a local football player for the Kamara FC.

The Bush Chicken will be following the situation as the story further develops.