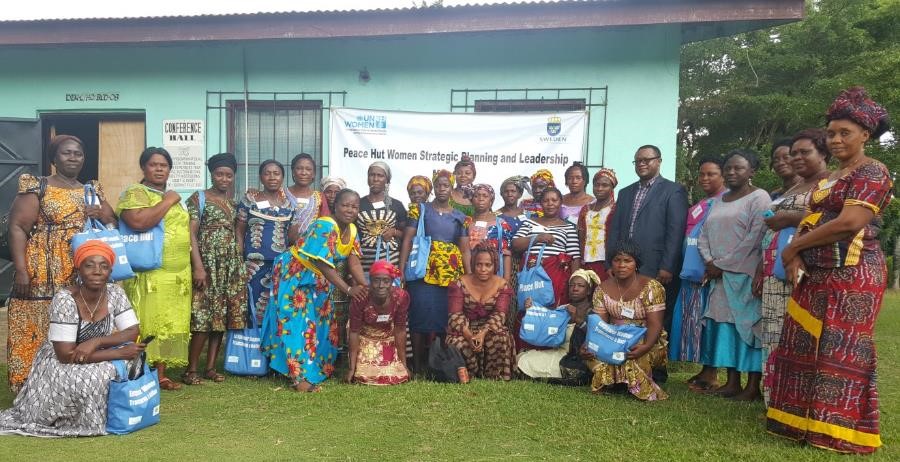 GBARNGA, Bong â€“ The national chair of the Peace Hut Women of Liberia, Annie Nushaan, has reminded women about their role to maintain the countryâ€™s peace after the October presidential and legislative elections.

Nushaan told participants at the end of a four-day strategic dialogue workshop recently held in Gbarnga that the elections are critical for advancing womenâ€™s political leadership and ensuring that Liberia remains peaceful. The workshop was supported by the Swedish mission in Liberia through UN Women.

Nushaan said members of the Peace Hut are mobilizing to engage community members, especially young people, to prevent and manage conflicts during and after the elections.

According to her, women in Liberia have sacrificed greatly for the peace of the country. She emphasized that now is the time to recognize their contributions and ensure that they actively participate in the electoral processes, especially by voting more women in the legislature.

Already, a progressive provisional listing of candidates provided by the National Elections Commission indicates that the number of female candidates so far cleared to contest in the October 10 elections is much lower than the 30 percent recommended by law. Although the new elections law provides that a political party or coalition submitting its candidates for an election should try to ensure that the governing body and its list of candidates have no less than 30 percent of members from each gender, no political party so far has achieved the benchmark.

Nushaan meanwhile called for increased support to the work of the Peace Hut Women, amid the need for interventions in border communities across Liberia.

â€œAt the borders communities, our women are telling us that they experience different kinds of problems that we need to address,â€ she said. â€œIt is also important that our women are part of monitoring peace along the border since they interact with citizens of the other countries daily.â€

Meanwhile, the deputy country representative of UN Women, Peterson Magoola, has reaffirmed UN Womenâ€™s support to efforts by the Peace Hut Women of Liberia that are directed toward peace-building, womenâ€™s leadership, and economic empowerment at the community level.

Magoola said the womenâ€™s accomplishments are internationally recognized and urged the women to do more to take ownership of peace and stability in the country, especially when UNMIL is currently transitioning responsibilities to Liberians.

â€œYou women have shown to the world that you have the power to contribute to a peaceful and democratic society and I have no doubt that with your collective efforts Liberia will remain peaceful even beyond the transition of UNMIL,â€ he said.

Speaking on behalf of the Superintendent of Bong, Joseph Urey, said his countyâ€™s administration remains supportive of efforts aimed at maintaining peace in the country.

Making reference to the contribution of women in ending the countryâ€™s prolonged civil war, Urey said the women have not remained silent but have stood up whenever Liberiaâ€™s peace is threatened.

He encouraged the Peace Hut Women to expand their network and incorporate other influential women at the community level to reach out to more people with the message of peace.

The Peace Hut Women of Liberia is a community-based network of peace builders who operate within a woman friendly space.

Women have played a key role in securing Liberiaâ€™s peace. Â In 2003, a group of women led by 2009 Nobel Peace Prize laureate Leymah Gbowee forced a meeting with then President Charles Taylor, who assured them that he would accept to hold peace talks with rebel factions.

The women sent a delegation to Accra and blocked the presidential palace, where the peace talks were being held, preventing anyone coming out in the absence of a peace agreement.

Following the signing of the comprehensive peace agreement, the group of women insisted on taking part in the monitoring of the peace process.