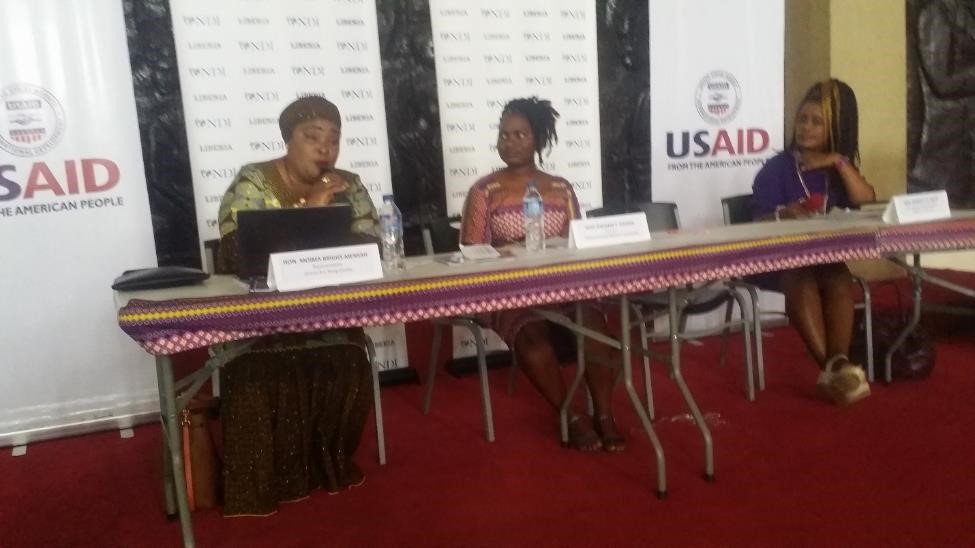 MONROVIA, Montserrado â€“ A womenâ€™s empowerment group has launched a report highlighting factors affecting womenâ€™s political participation in Liberia. The report assesses the current state of women political leadership by mapping the number of women serving in leadership across all branches and sectors of government.

The group, the Visionary Young Women Leadership, was supported by National Democratic Institute for International Affairs with funding from USAID.

Its head, Angelique Myers, said findings of the report were gathered through in-person interviews focusing on the challenges of aspiring women leaders and what helped current women leaders attain political positions. The report considered women holding leadership positions in both the private and public sectors.

â€œThis research was done to examine womenâ€™s political empowerment in Liberia and to assess the current state of womenâ€™s political participation,â€ Myers said. â€œOur team conducted a mapping of women leaders in the executive, legislature, judiciary, and the security sectors.â€

The report shows that women occupy more leadership positions and hold more responsibility in the judiciary branch of government than in the executive and legislature. The report aimed to reflect women in leadership in the security sector; however, Myers said that could not be done because of â€œdifficulties in accessing data.â€

She named illiteracy and lack of confidence and mentorship opportunities for women as major obstacles to womenâ€™s leadership.

The report noted that women are slowly closing the gaps of underrepresentation, but said the number remains insignificant at the level of civil society and political party leadership.

It highlights that women currently occupy only 3 of the 19 cabinet positions, which account for 15.8 percent; and 34 of 134 top-level technocrat positions, also accounting for 25.4 percent in the executive branch of government. Also, only 3 of the 15 county superintendents are females, while only 10 of 30 city mayors currently serving in the government at the time the survey was taken were women.

In the legislature, where the report disclosed are 25 male political leaders and a female political leader, only 11 of the total membership of 103 lawmakers are also females, constituting 10.7 percent women representation. Also, less than 20 percent of lawmakers serving as committee heads in the Senate and House of Representatives are females. According to the assessment report, women also represents less than 35 percent of major actors in the judiciary. It further noted that of the five justices of the Supreme Court, women account for two, one less than men.

Of all 16 Circuit Court Judges, only five are women. There are also four women to 31 male judges serving in specialized courts in the country.

Making remarks at the launch of the report, the Liberia Immigration Serviceâ€™s deputy commissioner, Asatu Bah Kenneh, named education is a key factor that would further bridge the gender disparity in leadership.

â€œIf I had not gone to school I would not have had positions Iâ€™m occupying presently in government,â€ Kenneh said.

She congratulated the group for the initiative but encouraged them to include older women leaders to foster their vision. Low women participation in government is nothing new in Liberiaâ€™s history. Despite being headed by the first female to be elected president in Africa, female representation in the previous administration was underwhelming.

In fact, it became the most surprising result for Liberia in the 2016 iteration of the Ibrahim Index of African Governance when Gender became the only subcategory in which Liberia decreased in performance over the past decade.

Before the last general elections, three females and 16 males occupied cabinet positions in the executive, while at the same time, two out of five members of the Supreme Courtâ€™s bench in the Judiciary branch were females. In the 53rd legislative of 103 members, women also only occupied three seats in the Senate and nine seats in the House of Representatives.