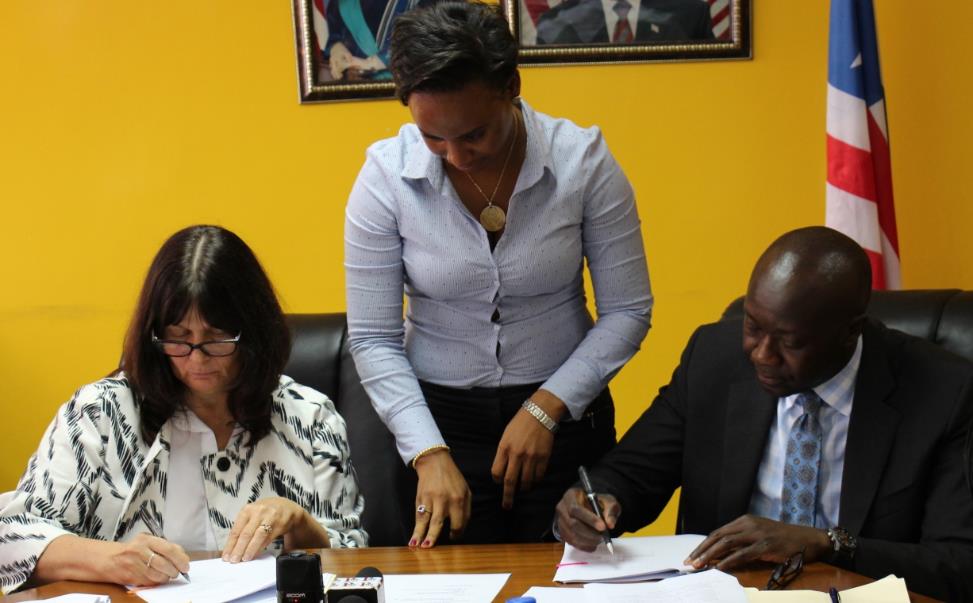 MONROVIA, Montserrado – The World Bank and the Government of Liberia have signed a US$36.7 million grant to support ongoing efforts to improve integrated management of targeted forest landscapes.

The grant agreement was signed on Wednesday in Monrovia. The government of Norway is supporting it.

The agreement also seeks to increase the sharing of benefits from the countryâ€™s forest landscapes.

The Liberia Forest Sector Project is the first program under a 10 year World Bank initiative that was launched recently under the Forest Action Plan.

It marks the beginning for Liberia to undertake initiatives that would enhance increased contributions to the economy by the forest sector. It is also geared toward driving the countryâ€™s forest sector from commercial management to a system that will promote conservation and local Community participation in its management.
Spanking at the signing ceremony, World Bank Country Manager for Liberia Inguna Dobraja said the agreement is part of efforts to stabilize the countryâ€™s economy after it was devastated by the outbreak of the Ebola virus disease. She said it will help to ensure that natural resources benefit the country and its citizens.

“It will support the strengthening of relevant institutions, policies and capacities, and attract investments in the sustainable management and use of one of the largest contiguous forest blocks left in West Africa,” Dobraja said.

Outgoing Finance and Development Planning Minister Amara Konneh said the project is in line with the Agenda for Transformationâ€™s pillar related to economic transformation and environmental cross cutting issues. Konneh added the Agenda for Transformation recognizes the forest resources can add growth to the countryâ€™s economy.

Vidar Helgesen, Norway Climate and Environment Minister added a more sustainable management of Liberiaâ€™s resources will be enhanced under the new agreement.

He said, â€œWe strongly believe this will be to the benefit of the rural population, the Liberian economy, the global climate and biodiversity.”

He praised efforts by the country to transition its forestry sector resource management and promised that his government was proud to support the process.

As a result of the agreement, the Forestry Development Authority or FDA in collaboration with other agencies including the Environmental Protection Agency, the Ministries of Lands Mines and Energy among others will lead the implementation of the LFSP.

Meanwhile, Forestry Development Authority Director Harrison Karnwea noted that the LFSP is a new beginning in the management of the countryâ€™s forest resources. “It will increase the sharing of benefits accrued and support small-scale and community-based enterprises based on the sustainable use of these resources,” Karnwea added.
The World Bank said in a statement that Liberia, a country with approximately 4.5 million population has faced difficulties in managing its 4.5 million hectares of lowland tropical forests for long-term, sustainable economic growth.

The statement said, most of the countryâ€™s conflicts especially the 1980 coup and conflicts that succeeded up to 2003 were backed mostly sponsored by leaders from sales generated from timber.

As a result of that, the United Nations imposed a sanction on Liberia in 2003 against timber and roundwood trades. The countryâ€™s 14-years civil was being greatly financed by revenues accrued from the sales of the natural resources.

The government of Liberia and partners meanwhile launched a reform process for the forestry sector following the lift of the sanctions in 2006 following the installation the first post war democratically elected government headed by President Ellen Johnson Sirleaf.