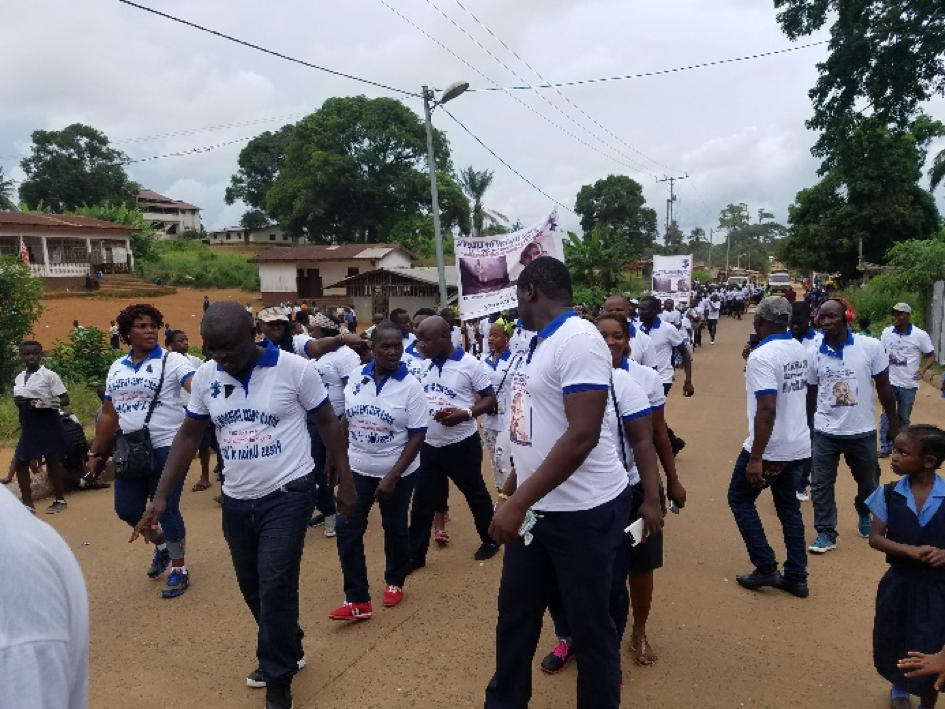 HARPER, Maryland â€“ Members of the Press Union of Liberia joined journalists across the world to celebrate World Press Freedom Day on Wednesday, May 3.

The celebration began with a parade of journalists along with students through Harperâ€™s streets, followed by an indoor program at the Harper City Hall, where the president of Tubman University, Elliot Wreh-Wilson, served as the keynote speaker.

Wreh-Wilson urged journalists to distinguish between news reporting and opinion or editorial writing. He said news report must be fact-based and balanced.

â€œAs a journalist, report what you see and hear and not what you are wishing, because disliking a person doesnâ€™t mean you should write against them,â€ he said.

â€œWe rely on you, the press, for the truth and integrity. We rely on you to report the role and condemn ill actions of government and its officials and everything that might be of public interest.â€

He continued: â€œWe are a free people and in a free society like this one, Liberia, we must have a free press. Without a free press, the country cannot improve.â€

Wreh-Wilson asserted that the free press is indispensable to any democracy and its existence, something he said is recognized by the world today.

The president of the Press Union of Liberia, Charles B. Coffey, said the decision to bring this year’s WPFD celebration to Maryland is a reflection of the reality that no part of the country can go forward without the others.

He said journalists in Liberia cannot be successful at reporting on development if the issues are largely about politics in Monrovia, stressing that there are parts part of Liberia that remain isolated and their issues are not reported.

â€œCompatriots! We can never communicate decentralization when we in the media refuse to live it, so the selection of Maryland as the venue of this year’s 2018 WPFD celebration conveys the idea that the observance of such international day should at all times include real-life reportage of conditions education, agricultural, health and other issues affecting our society,â€ Coffey said.

This yearâ€™s celebration comes at a time where there have been tense exchanges between members of the press and President George Weahâ€™s government.

The BBC correspondent, Jonathan Paye-layleh, was part of an episode where the president accused him of having opposed him in the past. Paye-layleh said the presidentâ€™s accusations drew concerns about his safety, prompting him to extend a prescheduled trip to the U.S. because of â€œÂ the compelling need to get and stay out of the country.â€

FrontPage Africa was also closed, and its staff arrested as a result of a civil lawsuit for publishing an advertisement in its newspaper. The arrests came after several government officials had lambasted the paperâ€™s publisher.

The tense relationship between the Coalition for Democratic Change government and the press climaxed when a journalist was mysteriously murdered, raising suspicions that the government was involved. Investigation by the police has virtually erased any suspicion of the governmentâ€™s involvement and a man has been charged and sent to court.

Amid this climate, the Press Unionâ€™s president emphasized the need for a free environment that will help the community identify and discuss their needs without intimidations.

He demanded that the Weah administration include the media in policymaking to enhance its capacity to serve the state and its people.

â€œWe in the media are [an] indelible pillar of the state and deserve to benefit from scholarships and short and long-term professional career development seminars at home and abroad,â€ he said. â€œPlease, the media must not be left out of any agenda for the country again.â€

He asked that all media practitioners report the truth, respect the rights of others, and work for the greater good of humanity.

World Press Freedom Day is celebrated May 3 every year to raise awareness on the importance of press freedom and remind governments of their duty to respect and uphold the Freedom of Expression Law adopted at the 26 Sessions of the UNESCO General Conference in 1991.