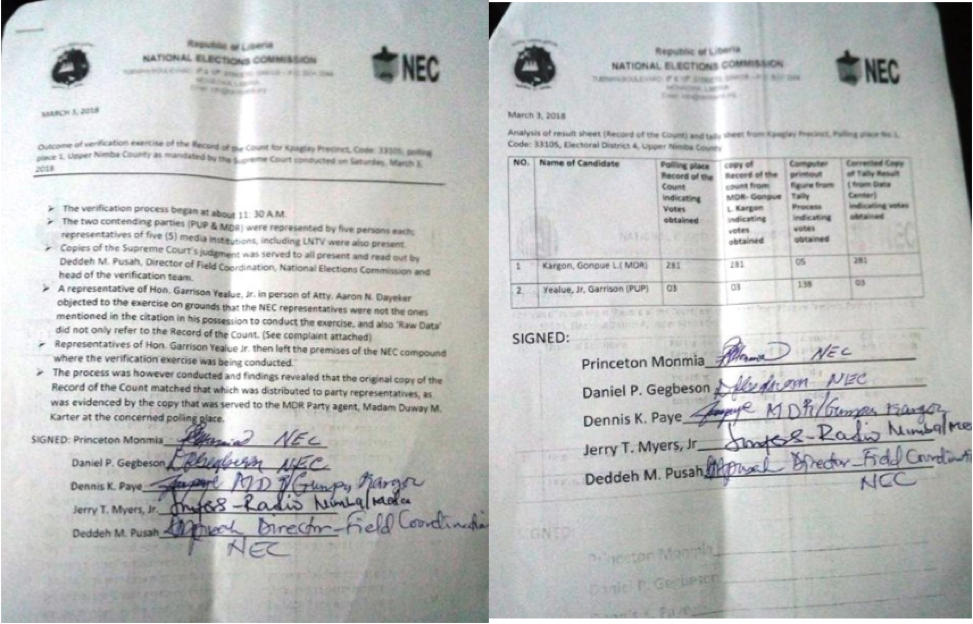 SANNIQUELLIE, Nimba â€“ After the conclusion of the Supreme Court-ordered re-examination of raw data in Nimbaâ€™s fourth districtâ€™s electoral dispute, many questions remain, as representatives of incumbent lawmaker Garrison Yealue decided to boycott the exercise.

On February 9, the Supreme Court had ruled in the districtâ€™s election dispute case, ordering the National Elections Commission to re-examine ballot results at the Kpaglay Polling Center with the instruction that all parties be present for the process. The dispute is between Garrison Yealue, the incumbent, and the other leading candidate, Gunpue Kargon. Kargon had initially won 6,326 votes while Yealue received 6,153 ballots cast in his favor and Yealueâ€™s challenge led the case to the Supreme Court.

However, Yealueâ€™s representatives decided to boycott the March 3 process on grounds that the NEC team that was communicated to each party in the citation to be in charge of the process did not match the actual team that came to conduct the process.

Preston Monmia, the elections magistrate for Upper Nimba, said he was not surprised by Yealueâ€™s teamâ€™s decision to boycott the process, given that they had previously delayed the re-examination.

â€œAs usual, they always like to seek avenue to cause delay in the processâ€¦â€ he said. â€œThis, in itself, is their desire to see trouble always in the area.â€

The event had initially been scheduled for February 19, but Yealue had said NECÂ did not provide a written notification in time.

Monmia said despite Yealueâ€™s accusations that he was biased and unfair during the elections process, he has no regrets about his performance.

â€œI am very, very happy that this long-awaited time has come, and has gone,â€ he said. â€œAnd the manner in which the verification was done today, I am certified and very happy about it.â€

Despite Yealueâ€™s representativesâ€™ protests, the re-examination process did go on as scheduled. Five representatives from both parties were invited to observe the process, which was headed by Deddeh M. Pusah, director of Field Coordination at NEC.

Before the process began, a copy of the Supreme Court order was served and read aloud. Pusah said it was at this point that Yealueâ€™s team lodged their protest and decided to abandon observing the process.

â€œAfter the reading of the Supreme Court mandate, we got an objection from the representative of Hon. Garrison Yealue, [Atty. Aaron Daygor], on grounds that he had in his possession a communication that said this exercise should have been conducted by our operations director and the training director,â€ Pusah said. She added that Daygor interpreted the courtâ€™s order as requiring â€œevery record as pertaining to the electionâ€ to be reviewed instead of only the records of the counts.

Pusah said NEC interpreted the court order as requiring the re-examination of the records of the counts and said her team was in full compliance. She, however, asked Yealueâ€™s representatives to file official complaints and once those complaints were submitted, the process continued.

â€œBecause we were mandated to carry out the exercise on this very date, we had to carry it out,â€ she added. â€œSo, even though they were not present, but at least, we noted their presence from the very beginning, and their objections on grounds that we were not supposed to conduct the exercise.â€

The findings from the verification process are expected to be submitted to NECâ€™s Board of Commission and then later to the Supreme Court for its final decision.

As for Daygor, Yealueâ€™s lawyer, he said he would not rule out initiating another court process.