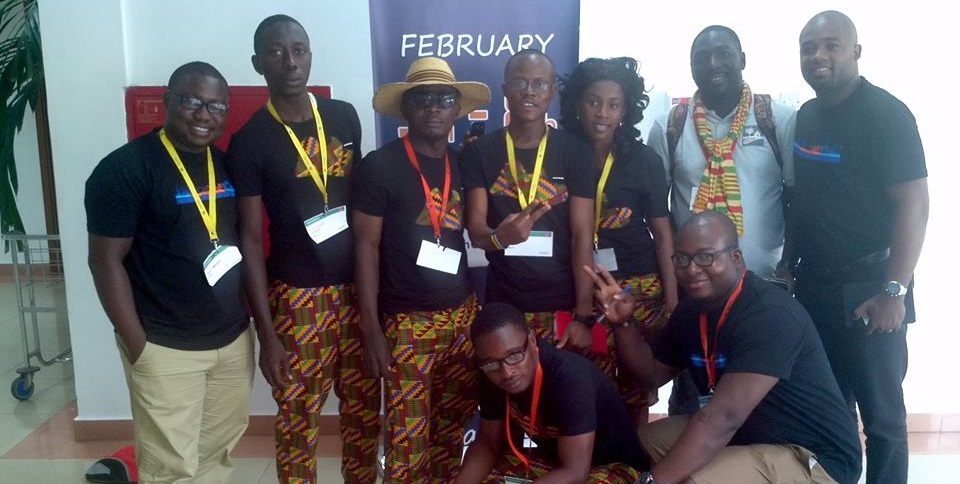 This past weekend, seven young Liberian entrepreneurs traveled to Ghana for a technology conference that brought together 100 young entrepreneurs from across West Africa including Cote Dâ€™Ivoire, Burkina Faso, Togo, Benin, and Nigeria. The goal of TechCamp West Africa was to have the youth network with each other in addition to meeting technology leaders from the region. The conference was sponsored by the US Embassy in Ghana and the GhanaThink Foundation.

The Bush Chicken spoke with James Mulbah at the end of the conference to get his feedback. Mulbah is the CEO of Green Cities Inc., a youth-run enterprise that has so far created at least 20 jobs and started the first waste recycling center in post-war Liberia.

The interview has been edited for brevity and clarity. The Bush Chicken: Tell me about yourself. What type of experience did you have before going into the waste management industry?

James Mulbah: When Green Cities was established, the objective of the center was two-fold â€“ to create job opportunities for young people and to also reduce the volume of garbage in Monrovia. Those are the two goals that we started working with, and they are the same objectives we still have. As it relates to my personal and professional achievements, I graduated from the University of Liberia. I also did some waste management training in Holland and Sweden in addition to Ghana. I also serve as one of the council members on the Ambassadorsâ€™ Council of Youth Advisors. Additionally, I am a Mandela/Washington Fellow and sit on the fellowship’s regional board for West Africa, representing Liberia and Sierra Leone. On the board, I represent those two countries on issues affecting the alumni members of the Mandela Fellowship.

How did you find out about and become invited to TechCamp West Africa?

I am a member of a network of entrepreneurs (Entrepreneurship Network for West Africa). Within this network, a colleague of mine provided me with this information. The Business Startup Center in Monrovia also shared the same information with me.

This conference deals with information technology (IT). Which part of your business deals with IT?

Nowadays, when it comes to marketing, you need to involve technology. About 60% of marketing around the world is conducted using information technology. So itâ€™s about using technology to improve the marketing and reach of the business.

Were you doing any marketing using IT before you attended the camp?

It was something that I started doing before, but I got more into it during TechCamp. I was not too involved in it, but to improve my business and acquire more customers, itâ€™s something I will need. Thatâ€™s as far as the company will deal with IT. We are not open to diversifying our company into having technology as a core function of the business, but we will use it for marketing.

Now that the conference is over, what did you get out of TechCamp?

It is difficult now to do business in the modern world without having access to technology. One thing Iâ€™ve learned is that I need to get deeper into using technology to expand my business. My long-term goal is to expand the company into other countries, mainly Mano River Union countries. To achieve that, I will need to employ technology to scale up. At TechCamp, there were many speakers from Google, Microsoft, and other institutions emphasizing the importance of technology in our modern society. That resonated with me.

Who were some of the people you met this weekend that had an impact on you?

I met Patrick Awuah, the founder of Ashesi University. He told me that I could choose to pursue a traditional business that doesnâ€™t have an online presence, but at the end of the day, the business would not be recognized internationally. Because of that, he advised that I needed to set up a website, blog, Twitter, and make sure I stayed connected.

Otema Yirenkyi, from Microsoft, also stressed the need to have one focused message in the companyâ€™s online presence. That is to say, to avoid having information on your website thatâ€™s different from whatâ€™s on your blog or Twitter and Facebook. That helps send a clear message of trust to the minds of viewers.

What is the benefit of knowing that there were other people from Liberia who went there with you?

The general TechCamp network is already there, as it relates to the 100 participants. However, weâ€™re also establishing a network amongst the seven of us. We want to go back and start a campaign to motivate people to branch out and examine other platforms such as Twitter or Google+ instead of relying solely on Facebook as most Liberians currently do. Weâ€™re going to use the media, in addition to organizing some community activities and have people coming together to learn how to operate a blog or open accounts on other platforms.

You talked a lot about using the skills you learned here to market to customers in Liberia. What do you say about people who say, â€œLiberia doesnâ€™t have many people using the internet; how will this work?â€

One thing that we are actually going to do back home is to use technology to educate people. We need to make our customers understand the technology so we will share knowledge with our clients and encourage them to use IT. One place we will really focus on is groups on Facebook because that has been a huge focus for a lot of Liberians lately. Weâ€™ll also be encouraging them to use other social media platforms.

Are you saying that there are enough Liberians with internet access to whom you can market?

Yes, among my potential customers, because I am mainly operating in Monrovia. Most of them have internet access.

Who are your customers?

My general waste collection customers right now are households, offices, and hotels. We also have farmers among our customers, because we supply them with compost. Where the company is right now, we have transformed it from a community base that was restricted to a single location into one that can serve any part of the city.

What are some of the challenges that Liberia faces as it relates to IT?

The main problem right now is that we pay too much for internet connection. Weâ€™ve heard that the government is running fiber connections in Monrovia to bring about faster and cheaper internet. We are still hoping to see that work.

Another issue is the lack of interest from the public because the government has not been willing to speak more on these things. In our country, the people believe in the government more than any other thing. If the government can take the lead and encourage people, youâ€™ll see more people connecting.

This past year has been pretty big for you. You were a Mandela/Washington Fellow; you won the Business Startup Centerâ€™s award for the most innovative entrepreneur, and you were one of only seven selected from Liberia to attend this conference. What do you have planned for next year?

My plan for next year is to have the business going at the level where I can increase my revenue and focus on increasing my customer base. We have a 3-year strategic plan for the business. Most of that involves building capacity. Part of that was what I did in Washington, DC with the Mandela/Washington Fellowship, and in Sweden. I am also working on getting my staff properly trained. Even my deputy will be receiving training on Saturday. Other aspects of the plan have to do with focusing on increasing the customer base.

Thank you for agreeing to have this conversation. I think it is imperative for these issues to be highlighted. I just wonder, do you have any advice for Liberian entrepreneurs?

One thing I always tell Liberians, especially those who want to venture into their own businesses, is to think out of the box. Do not keep doing what everyone is doing. Most Liberians like to do what they see others doing if it looks successful. In that way, if they see someone selling a bag of rice, theyâ€™ll go sell a bag of rice too. What is the value that youâ€™re adding that differentiates you from the others who are selling bags of rice?

We also just need to be patient, we need to be persistent, and be focused. People should stop focusing on government. It happens everywhere in Africa, not just Liberia. You have business people that talk so much, and they are not doing anything to improve their businesses. If we focus on improving our businesses, weâ€™ll be able to build our businesses and become millionaires and perhaps billionaires.