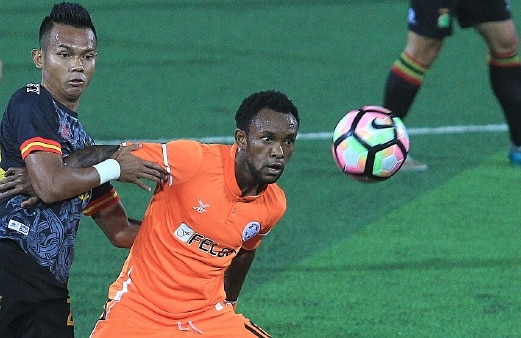 As the 2017 Malaysia Super League approaches the second half of its season, Liberians plying their trade in the Asian nation are yet to experience a consistency in winning while their clubs continuing to perform poorly.

Unlike the 2016 season where Zah Krangar’s Felda United finished second at the end of the season, the deteriorating club, among others, has become among the worst performers in the ongoing league.

With eight games played so far, Felda United has managed only two wins and three draws while suffering 3 defeats and now sits seventh on a 12-team table with 9 points. The poor form also extends to the continental stage where the club lost 2-1 away to Singaporean side, Tampines Rovers.

The last registered win was on Saturday, March 4 with a 2-0 win over second from bottom positioned club, Sarawak FA. Meanwhile, Krangar has only managed to score once from nine appearances against Kelantan where his side lost 2-1 at home.

Veteran striker Francis Forkey Doe, who finished the 2016 league season with 15 goals from 19 matches, has also found it difficult to score this season for Selangor FA with the league side yet to get back in top form after a more desired performance last season.

Selangor finished fifth last year with 28 points, 30 points behind champions Johor and looks far from hitting top form once again after a disappointing campaign this season.

From eight games, Selangor has won three, drawn three, and lost two, while Doe has managed to score just three goals from seven appearances after beginning the season on a fine note but has since found it difficult to return to its regular scoring ways.

Selangor is currently seated fifth on the league table with 12 points from the eight matches played. The recent defeat was a narrow 1-0 loss at home to Perak FA on Saturday, March 4.

Elsewhere, the towering striker Patrick Ronaldinho Wleh is no exception to the underwhelming display by clubs with Liberian players. In addition to an inconsistent goal tally, his PKNS club is also experiencing a poor season campaign. Wleh has managed to score four times from eight appearances while his club has managed to win only two of their eight games played.

The Red Ants drew two games and suffered four defeats and are ninth on the table with nine points, one point above eleventh placed Sarawak FA, and six points above Penang FA who struggle at the bottom of the table.