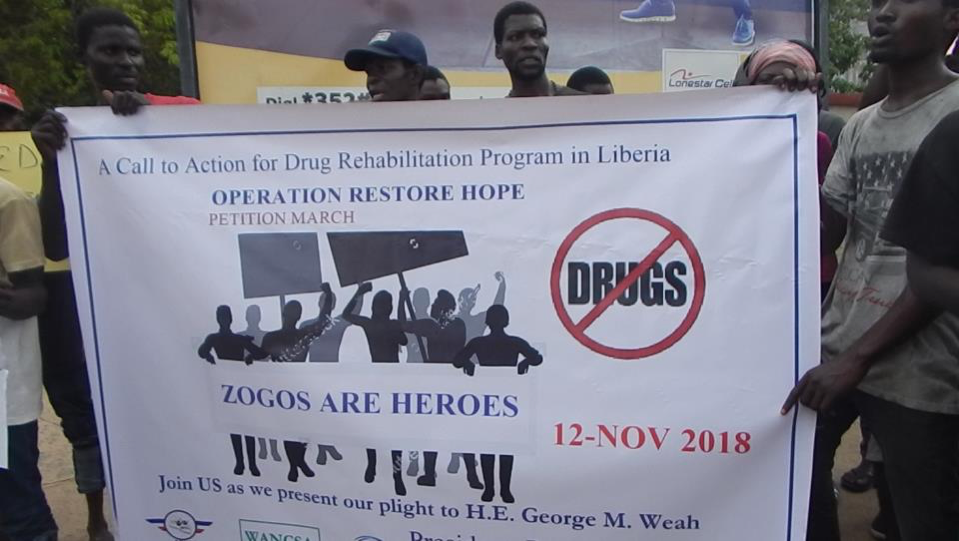 MONROVIA, Montserrado â€“ November 12 brought scores of substance abusers, commonly referred to as â€˜zogos,â€™ to the Foreign Ministry to petition President George Weah to establish a drug rehabilitation program to address their plight.

Many of the individuals regularly partake in the use of harmful or hazardous psychoactive substances, including alcohol and illicit drugs. They can usually be identified by their visibly gaunt figures and the fact that many of them earn income as car loaders.

Weah was out of the country when the petitioners arrived at the Foreign Ministry, however, both Monroviaâ€™s Mayor Jefferson Koijee and the office of Nathaniel McGill, minister of state, received copies of the petition.

Gathered under the banner of the West Africa Network of Civil Society Organizations on Substance Abuse, the petitioners chanted slogans such as â€œZogo go, zogo come, zogo want change.â€ Jacqueline Jackson was one of the petitioners. Photo: Zeze Ballah

Ansu Fofana, who chaired the group, said they had assembled before the presidentâ€™s office to petition him to provide â€œaccess to the appropriate healthcare and education.â€

According to Fofana, he and his colleagues want to be active participants in the fight against substance abuse across the country. However, he said they must first be rehabilitated.

He stressed that substance abuse and drug trafficking have become a serious problem affecting the countryâ€™s youths.

â€œThe issues should be addressed by the government and other stakeholders with the active involvement of [we who are] involved in taking the substances,â€ he added.

Fofana said he was concerned about the increasing rate of substance abuse among the youth in Liberia, a situation which he says undermines the growth and development of the country.

He also called on the government to provide funds to focus on the prevention and rehabilitation of young substance abusers. He asked that the curriculum in schools focus on the education and prevention of substance abuse. Fofana also called for the establishment of a mental health home to meet the needs of young people suffering from mental illness.

Jacqueline Jackson, a 26-year-old who admitted to abusing illegal drugs, told The Bush Chicken that she had joined her colleagues to petition the government because her mother had cried over the years to see her come back home.

â€œI became frustrated and decided to take in drugs because my babyâ€™s father abandoned me after giving birth,â€ Jackson said.

However, she said she was now tired of being in the streets and sleeping in graveyards.

â€œWe need to be given a second chance in the society,â€ she said.

Reuben Bobby Logan, who heads the Association of Progressive Youth of Liberia, joined the call for the government to act. â€œThere is a need for the government to address the plight of drug users through the implementation of concrete programs and policies,â€ Logan said.

He called the growing wave of drug users across the country a â€œnational emergency.â€